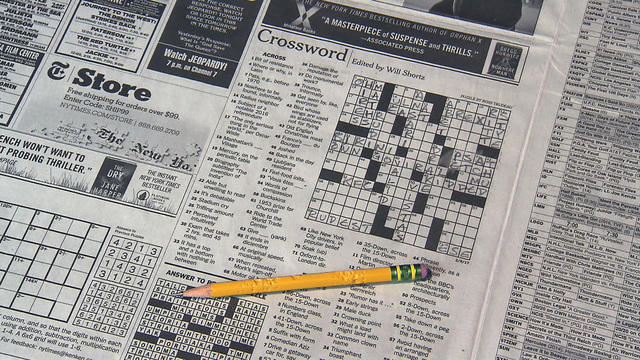 What’s a nine-letter word for a puzzle that’s been in The New York Times for 75 years?

If you love crossword puzzles, The Times’ crossword editor Will Shortz is a rock star.

“There’s something about this puzzle that grabs people. What is it?” Axelrod asked.

“Well, first of all, if you’re a puzzle sort of person and you look at an empty crossword grid, you naturally feel compelled to fill in the squares. That’s part of the appeal,” Shortz explained. “It’s partly the testing of yourself. Solving a crossword is one way to affirm that you can still think.”

“It keeps you from losing your mind,” said one fan.

The crossword gets progressively more difficult through the week.

“After Wednesday, forget it!” said another.

Each month, 1.5 million people try to tackle The Times’ crossword.

“I love it. It’s the best there is out there,” said another fan.

And yet, historically speaking, the newspaper is a curious home for the gold standard of crosswords.

“So the crossword puzzle become a national and then a worldwide craze in 1924 and ‘25. And The New York Times ran an editorial saying that crosswords were a waste of time and predicting their swift demise,” Shortz said.

“Literally having to eat their words,” Axelrod said.

“The Times was the last major metropolitan daily newspaper to start a crossword,” Shortz said.

The Times debuted its crossword puzzle two months after Pearl Harbor. The first crossword had a World War II theme to play off the day’s headlines.

“Seems kind of crazy. The crossword really should divert you from the harsher parts of life. It’s really — crosswords are escapism,” Shortz said.

There have only been four puzzle editors at the paper in the last 75 years. Shortz took over in 1993.

Why that word? “The nice thing about it is that there’s lots of ways to clue it,” Shortz explained. “You know, it’s the historical period. It is the earned run average in baseball. It’s the name of a laundry detergent. There are just lots…”

“Equal rights amendment,” Axelrod jumped in with another example.

“Right, equal rights amendment. There’s lots of things you can do with it,” Axelrod said.

In November 1996, The New York Times published one of its most memorable puzzles.

“You have an all-time favorite,” Axelrod said.

The country was deciding between Bob Dole and Bill Clinton, and so was the puzzle.

“The answer could be Clinton elected or Bob Dole elected. Either one worked with the crossings,” Shortz explained. “For example, the first down answer across that was, ‘Black Halloween animal.’ And you could fill in ‘cat’ forming the ‘C’ of ‘Clinton’ or ‘bat’ forming the first ‘B’ of ‘Bob Dole.’ And each of the succeeding answers did double duty just like that. That was the first time a crossword ever was schizophrenic like that, first time a crossword ever had two answers.”

The puzzles thrive on short words with plenty of vowels. That’s why a crossword’s favorite cookie is the Oreo. Its favorite music producer is Brian Eno. And its favorite skater is either Apolo Ohno or Midori Ito.

The crossword’s future, like every other part of the paper, is a matter of adapting to the digital age of a world moving faster and attention spans growing shorter. The puzzle’s latest innovation is the “Mini,” which is one-third the size of a regular puzzle and available only online or with the app.

“The thing that excites me about the Mini is that this is kind of like uncharted territory,” said 24-year-old Joel Fagliano, the editor of the Mini puzzle. “There’s ways to experiment with a digital crossword that you could never experiment with a print puzzle.”

“A couple weeks ago I put an emoji as a clue,” Fagliano said. “This is what excites me about the digital era of crosswords.”

But crossword traditionalists need not worry. At least that’s what Will Shortz is telling us.

“Crossword is the best variety of puzzle ever devised. It’s just a very versatile puzzle that appeals to people,” Shortz said.

“Is The New York Times crossword puzzle going to be around in another 75 years?” Axelrod asked.

“I think the crossword is here to stay,” Shortz said.

Wednesday’s guest puzzle author is Daniel Larsen, and at 13 years and 4 months old, he is the youngest person in the history of The Times crossword to create one.