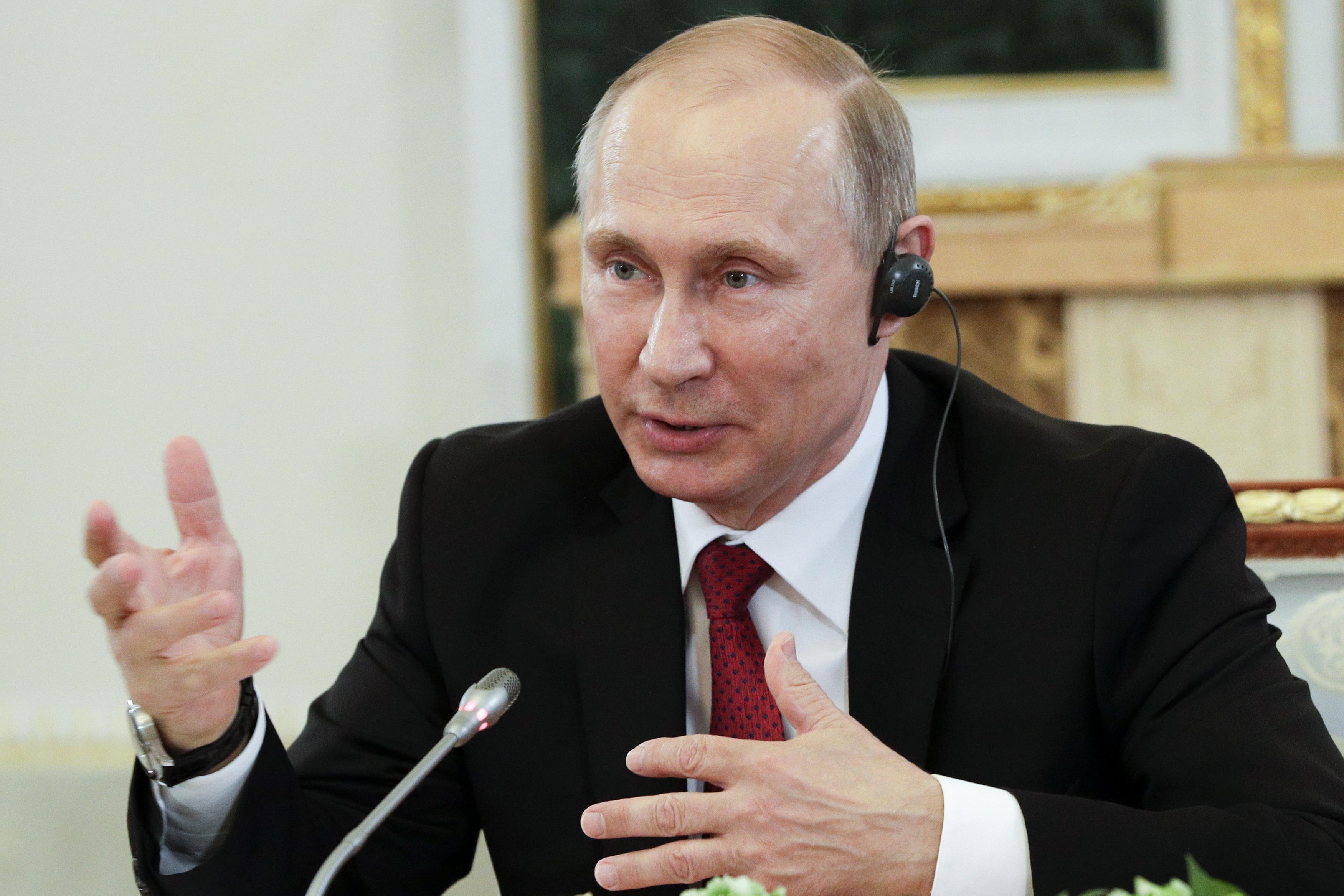 ST. PETERSBURG, Russia -- President Vladimir Putin insisted Thursday that the Russian state has never engaged in hacking and scoffed at allegations that hackers could influence the outcome of elections in the United States or Europe.

But the Russian leader admitted the possibility that some individual "patriotic" hackers could have mounted some attacks amid the current cold spell in Russia's relations with the West.

Speaking at a meeting with senior editors of leading international news agencies, Putin also alleged that some evidence pointing at Russian hackers' participation in attacks - he didn't specify which - could have been rigged in an attempt to smear Russia.

"I can imagine that some do it deliberately, staging a chain of attacks in such a way as to cast Russia as the origin of such an attack," Putin said. "Modern technologies allow that to be done quite easily."

U.S. intelligence agencies have accused Russia of hacking into Democratic Party emails, helping President Donald Trump's election victory, and the Congressional and FBI investigations into the Trump campaign's ties with Russia have shattered Moscow's hopes for a detente with Washington.

Putin said the "Russo-phobic hysteria" makes it "somewhat inconvenient to work with one another or even to talk."

"It's having an impact, and I'm afraid this is one of the goals of those who organize it are pursuing and they can fine-tune the public sentiments to their liking trying to establish an atmosphere that is going to prevent us from addressing common issues, say with regard to terrorism," the Russian leader said.

Putin said Russia had been encouraged by Trump's campaign statements in which he lamented Russia-U.S. ties being at a historical low and promised to improve them. He added that Moscow still hopes to forge a constructive dialogue with Trump.

Putin predicted "this will end, sooner or later," adding that "we are patient, we know how to wait and we will wait."

The Russian president praised Trump as "a straightforward person, a frank person." Putin added that while some see Trump's lack of political background as a disadvantage, he sees it as beneficial because "he has a fresh set of eyes."

Asked if Russian hackers could try to shape the outcome of German parliamentary elections later this year, Putin said: "We never engaged in that on a state level, and have no intention of doing so."

He noted that Russia can work constructively with any German leader, adding that he had good ties with German Chancellor Angela Merkel despite some differences.

Russian meddling was also a concern in France, with Putin publicly expressing his sympathy for President Emmanuel Macron's rivals in the campaign. Macron's aides claimed in February that Russian groups were interfering with his campaign, and a document leak hit Macron's campaign in the final hours of the French race. Moscow has strongly denied all allegations of election meddling.

Putin argued that hackers, wherever they come from, can't sway election outcomes because the public mood cannot be manipulated that easily.

Putin added that while the Russian state has never been involved in hacking, it was "theoretically possible" that Russia-West tensions could have prompted some individuals to launch cyberattacks.

"Hackers are free people, just like artists who wake up in the morning in a good mood and start painting," he said. "The hackers are the same, they would wake up, read about something going on in interstate relations and if they have patriotic leanings, they may try to add their contribution to the fight against those who speak badly about Russia.

Russia's relations with the West have been at post-Cold War lows over the Ukrainian crisis. The U.S. and the EU have slapped Moscow with sanctions over its annexation of Ukraine's Crimean Peninsula and support for pro-Russian insurgency in eastern Ukraine.

Putin said Thursday that economic restrictions against Russia have had "zero effect."

He predicted that the current strain in relations will ease, because "it's counterproductive and harmful."

Touching on tensions in the Pacific, Putin said Russia's military deployments on a group of Pacific islands also claimed by Japan have been caused by concerns about the U.S. military buildup in the region.

The four islands, called the Northern Territories in Japan and the southern Kurils in Russia, were seized by the former Soviet Union at the end of the World War II, preventing the two countries from signing a peace treaty.

Putin said the U.S. will likely continue to build up its missile shield in the region even if North Korea agrees to curb its nuclear and missile programs, in the same way it has continued to develop missile defenses in Europe despite a deal with Iran that curbed its nuclear program in exchange for lifting international sanctions.