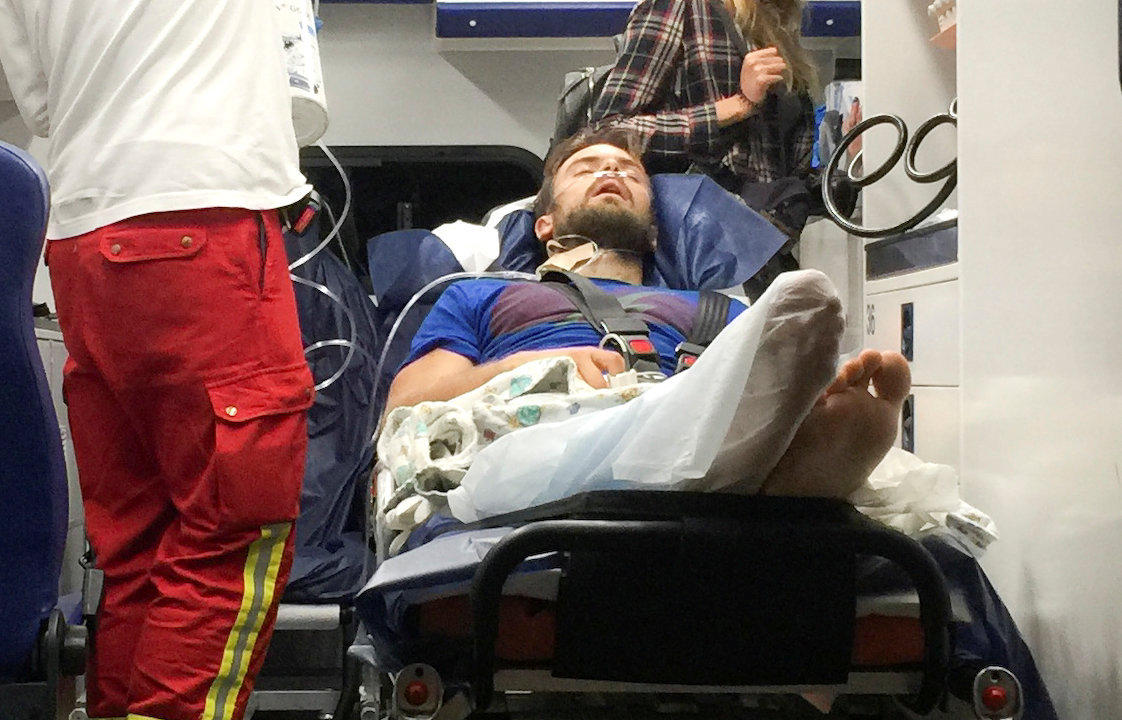 BERLIN -- German doctors treating Pyotr Verzilov, a member of Russian protest group Pussy Riot, say claims that he was poisoned are "highly plausible," based on his symptoms. Dr. Karl Max Einhaeupl of Berlin's Charite hospital told reporters Tuesday there is no evidence Verzilov was suffering from a long-term illness.

His colleague Dr. Kai-Uwe Eckardt said Verzilov, who has Canadian citizenship, has been receiving intensive care since arriving in Berlin on Saturday but his condition isn't life threatening.

Verzilov's symptoms, together with information received from relatives and the Moscow hospital he was admitted to last week, "make it highly plausible that a poisoning took place," Eckardt said. By contrast, he said, Charite doctors have found "no evidence whatsoever that there would be another explanation for his condition."

Eckardt said Verzilov fell ill on Sept. 11 after attending a friend's court hearing in the Russian capital, and was admitted to a Moscow hospital that evening with symptoms that included disorientation and widened pupils. Russian doctors suspected possible poisoning and treated him accordingly, emptying his stomach and performing a dialysis, said Eckardt.

He said the symptoms indicate Verzilov, who arrived in Germany by private medevac Saturday, is suffering from an anticholinergic syndrome that can result from the disruption of the nervous system that regulates the inner organs.

While doctors in Berlin haven't yet determined what was responsible for the poisoning, they said it could have resulted from various substances including high doses of some pharmaceuticals and plants that contain particular toxins.

Dr. Karl Max Einhaeupl, the Charite hospital's chairman, said doctors wanted to "refrain completely from all speculation about what made these problems happen."

While he wouldn't rule out that recreational drugs were responsible for the poisoning, he said such drug use is very rare.

"We have no evidence that there is a drug problem and it would be very unusual for someone to take a drug in the dose that it was taken," he said. "That would be done with suicidal intent, but we have no indications of this."

Eckardt, who heads the Charite's intensive care department, said he expects Verzilov to make a full recovery and hopefully suffer no permanent damage.

He said Verzilov, who also has Canadian citizenship, is already communicating with doctors but so far they haven't been able to question him in detail about his medical history.

"He remembers his friends and relatives, but he does not understand that he's in Germany, that he's in a hospital and there are doctors around him, not prison wardens. 'Are you the director of the prison?', - Peter asked yesterday to the head of the hospital," according to Tolokonnikova.

Verzilov was among four Pussy Riot protesters who barged onto the field during the soccer World Cup final in Moscow in July. The members of the punk protest collective were handed 15 day jail sentences for their stunt, during which they ran onto the pitch at Luzhniki Stadium dressed as police officers during the second half of the match between France and Croatia.

They used the protest to call for the release of political prisoners in Russia and for more open political competition.

A Russian court sentenced them after finding them guilty of violating the law on behavior of sports events spectators. They were also banned from attending sports events for three years.