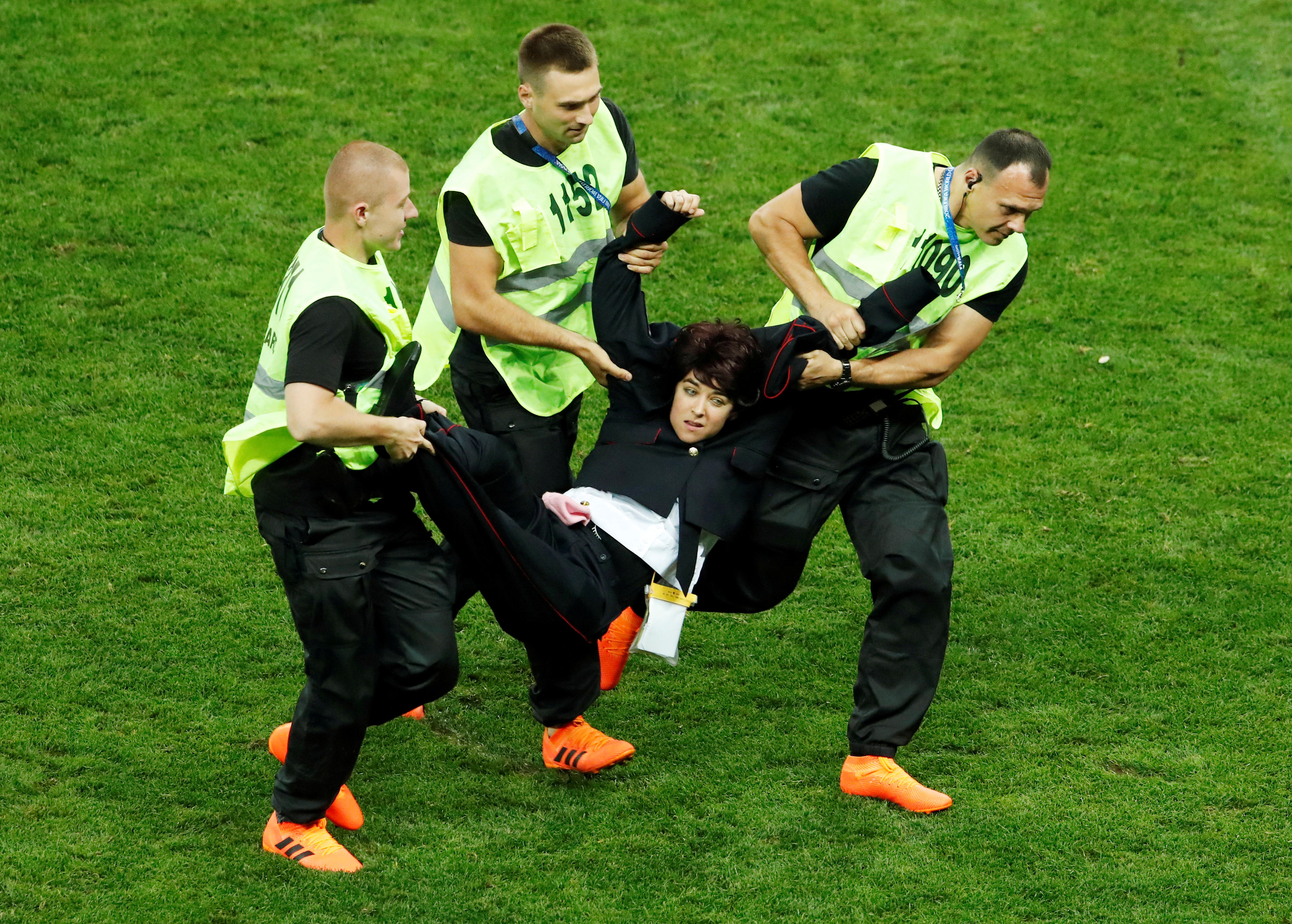 MOSCOW -- Protest group Pussy Riot, long a thorn in Vladimir Putin's side, claimed responsibility Sunday for four people who brought the World Cup final to a brief halt by running onto the field dressed in police uniforms as the Russian president and a global audience watched. Stewards tackled the three women and one man who charged onto the field simultaneously in the 52nd minute of one of the world's most viewed sporting events.

Croatia defender Dejan Lovren pushed the man, helping a steward to detain him, and suggested the incident put Croatia off its game. The team was 2-1 down when the protest happened, and eventually lost 4-2.

"I really was mad because we'd been playing at that moment in good shape," he said. "We'd been playing good football and then some interruption came. I just lost my head and I grabbed the guy and I wished I could throw him away from the stadium."

Before being hauled away, one of the women reached the center of the field and shared a double high-five with France forward Kylian Mbappe.

"Hello everyone from the Luzhniki field, it's great here," the group said on Facebook, and released a statement calling for the freeing of political prisoners, an end to "illegal arrests" of protesters and to "allow political competition" in Russia.

The four were charged with violation of spectators' rights and illegal wearing of law enforcement symbols and could face penalties of up to 11,500 rubles ($185) or 160 hours of community service, the Interfax news agency reported. They later claimed police would not allow their lawyer to see the activists who were detained.

Pussy Riot's statement also referenced the case of Oleg Sentsov, a vocal opponent of Russia's annexation of Crimea from Ukraine in 2014, who was sentenced in 2015 to 20 years for conspiracy to commit terror acts. He denies the charges and has been on a hunger strike since mid-May.

The group said the police uniforms symbolized how Russian police's actions fall short of their "heavenly" depiction in literature and called for reforms. It wasn't clear if they used the uniforms as a ruse to enter Luzhniki Stadium amid tight security, and the group couldn't immediately be reached for comment.

"The citizens in question were taken to the local police station," the Moscow branch of the Russian Interior Ministry said, without providing further details.

A video circulated on Russian social media after the match appeared to show two of the protesters, still in police uniforms, being harshly interrogated at a police station. The Internet TV channel Dozhd identified one of them as Pyotr Verzilov, one of the group's most prominent members.

Under barking queries from a man off camera, Verzilov says, "I am for Russia, just like you -- if you are for Russia."

"I sometimes wish it was 1937," the man off screen says, referring to the year in which Stalinist purges were at their height.

Putin was watching the game alongside his French and Croatian counterparts and FIFA President Gianni Infantino, among other dignitaries.

Pussy Riot was previously known for wearing brightly colored balaclavas, though those who protested Sunday did so with their faces uncovered. The group posted a second statement later with three women, one wearing a pink balaclava, reading a statement acknowledging police had relaxed somewhat during the tournament but calling for greater restrictions on their powers.

"The World Cup has shown very well how well Russian policemen can behave," one of the unmasked women said in the video. "But what will happen when it ends?"

FIFA did not immediately respond to a request for comment.

The protest was briefly shown on international TV broadcasts, even though FIFA policy is usually to cut away when fans and others run onto the field. The group has antagonized Putin for years and members have served time in prison for staging various high-profile protests.