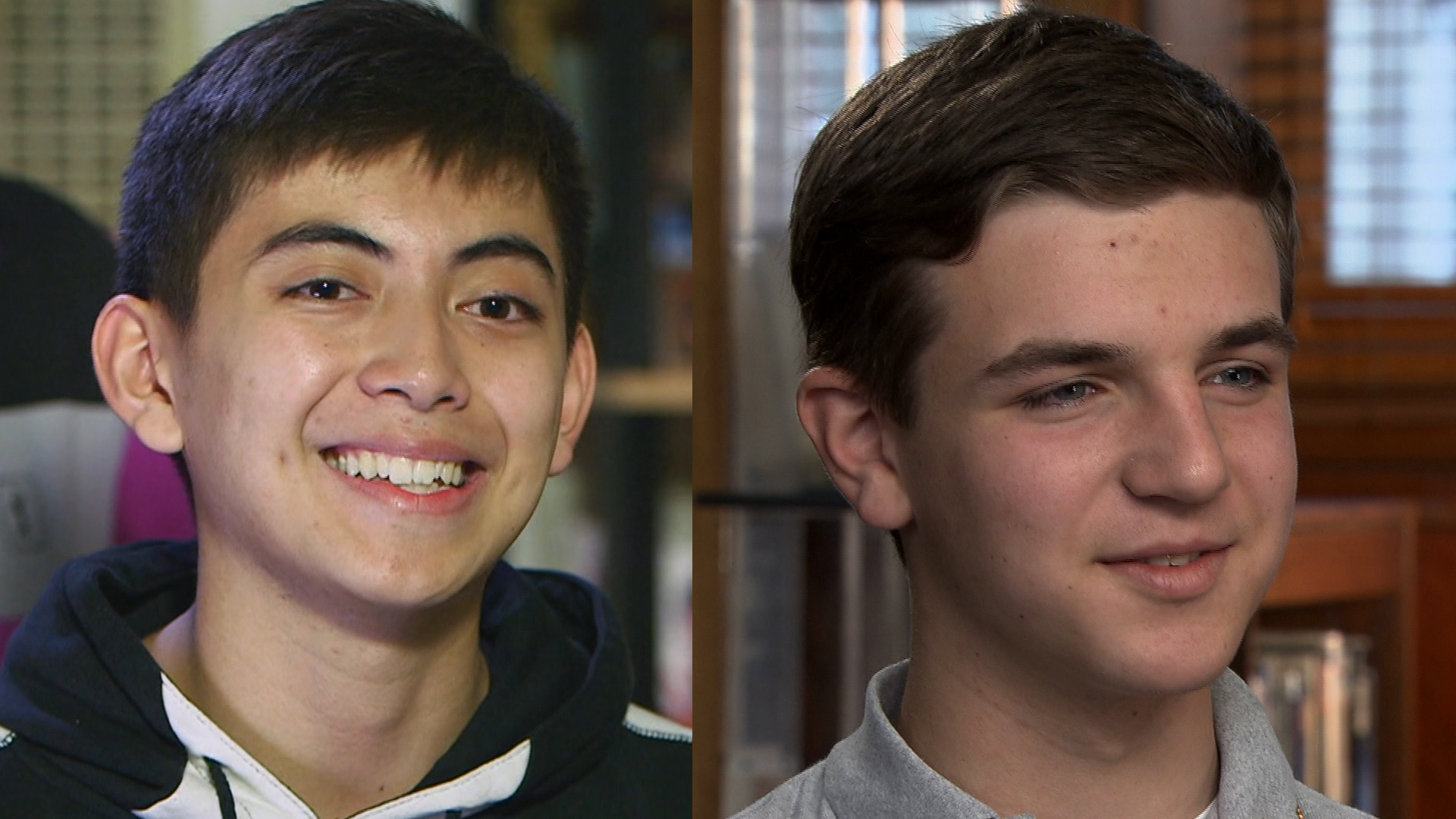 Two high school students not only conquered calculus, they pulled off an achievement that can stump college professors. Of the 302,532 students around the world who took the Advanced Placement calculus test last year, Landon Labuskes and Cedrick Argueta were two of only 12 who achieved a perfect score.

Landon may seem like an ordinary 15-year-old at Paul VI Catholic High School in Fairfax, Virginia. In many ways he is, but he also knows what it's like -- at least in math -- to achieve perfection. Most of the test-takers were juniors and seniors -- he was a 14-year-old sophomore, reports CBS News correspondent Chip Reid.

"What does it feel like to have been perfect on this test?" Reid asked.

"Honestly, it's a little overwhelming. It's lots of interviews like this," Landon said.

"And a tweet from the president," Reid pointed out.

"That was pretty cool," Landon said.

His perfect score placed him in the top 0.004 percent. Landon's parents said perfection is a big deal for him.

"Mom and Dad, were you surprised that he got a perfect score?" Reid asked.

"Not because you don't think highly of him," Reid said.

"You figured he would make a silly mistake somewhere along the line," Reid said.

"I did. It's just natural," Barbara responded.

Even the college professors who write the tests make mistakes.

"The professors don't think this could happen. It is why it is so remarkable when a high school student who doesn't have a college degree, let alone a Ph.D. in that subject area, is able to take an AP exam and not miss a single point," said Trevor Packer, who leads College Board's Advanced Placement program.

"You say that he takes an intuitive approach. ... Can calculus be intuitive and artistic?" Reid asked her.

"You come to calculus class to push the limits," Reid said.

"Absolutely. One of my t-shirts says 'calculus students know their limits,'" Watkins said.

That's something Cedrick Argueta understands well. A 17-year-old senior at Lincoln High School in Los Angeles, he too was one of the 12 students with a perfect score on the calculus exam.

"I like the absoluteness of math, that there is always an answer, but I know there is not always an answer now in upper-level math. Sometimes there are unsolved problems and just the unknown out there that makes me want to solve it," Cedrick said.

Cedrick's record with Rubik's cube is 15 seconds. He has a near-obsession with avoiding careless errors in math.

Cedrick's mother, Lillian, is a nurse who was born in the Philippines, and his father, Marcos, is a maintenance worker originally from El Salvador.

"I am getting emotional because this country offers a lot of good things to the immigrants like us, so I'm just thankful," Lillian said.

"Me, I didn't have the opportunity to study. We are here to help him to do whatever he wants," Marcos said.

Aside from the perfect score, that's another big thing Cedrick and Landon have in common -- parents who encouraged their children to do their best.

"The problem with someone like Landon is his best just keeps on getting better so it is hard to know when he's done his best," father David Labuskes said.