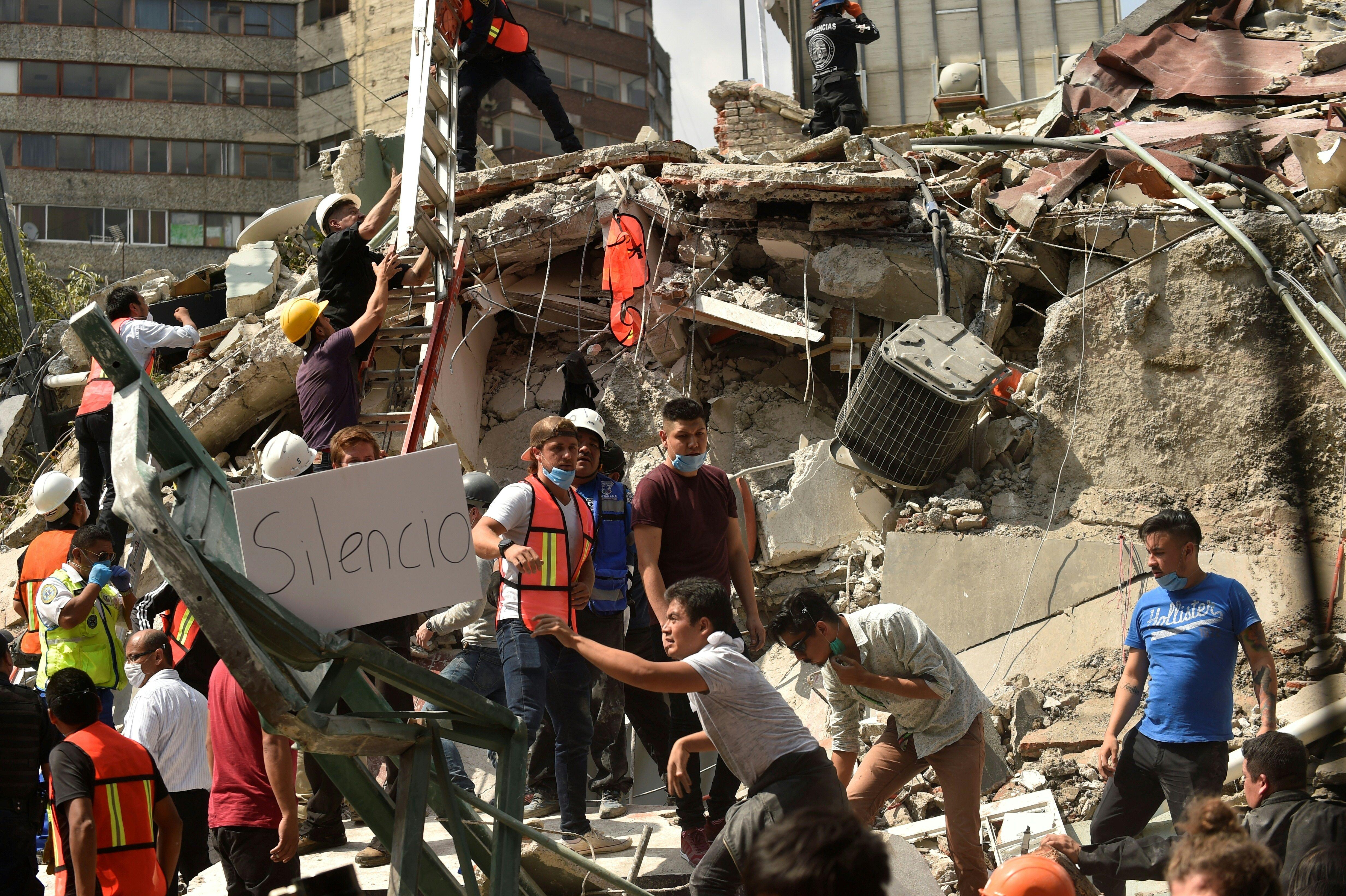 MEXICO CITY -- A powerful earthquake jolted central Mexico on Tuesday, killing more than 130 people, cracking building facades and scattering rubble on streets in the capital on the anniversary of a devastating 1985 quake.

The nationwide death toll rose to 139 on Tuesday evening, according to Mexico's head of Civil Defense, and the Mexican federal government declared a state of disaster in Mexico City which helps free up emergency funds.

The count did not include one death that officials in the southern state of Oaxaca reported earlier as quake-related.

Hours after the quake, rescue workers were still clawing through the wreckage of a primary school that partly collapsed in the city's south looking for any children who might be trapped. Some relatives said they had received Whatsapp message from two girls inside, but the claim could not be confirmed.

The earthquake is the deadliest in Mexico since the 1985 quake that killed thousands. It came less than two weeks after another powerful quake left 90 dead in the country's south.

The U.S. Geological Survey said the quake had a magnitude of 7.1 and was centered near the Puebla state town of Raboso, about 76 miles southeast of Mexico City.

Mancera said 50 to 60 people were rescued alive by citizens and emergency workers in the capital. Authorities said at least 70 people in the capital had been hospitalized for injuries.

The federal interior minister, Miguel Angel Osorio Chong, said authorities had reports of people possibly still being trapped in collapsed buildings. He said search efforts were slow because of the fragility of rubble.

"It has to be done very carefully," he said. And "time is against us."

At one site, reporters saw onlookers cheer as a woman was pulled from the rubble. Rescuers immediately called for silence so that they could listen for others who might be trapped.

Puebla Gov. Tony Galil said there were damaged buildings in the city of Cholula, including collapsed church steeples.

Earlier in the day, workplaces across the city held readiness drills on the anniversary of the 1985 quake, a magnitude 8.0 shake, which killed thousands of people and devastated large parts of Mexico City.

Thousands of Mexico City residents fled office buildings and hugged to calm each other along the central Reforma Avenue as alarms blared, and traffic stopped around the Angel of Independence monument.

Many people remained in the streets for hours, fearful of returning to the structures. Electricity and cellphone service was interrupted in many areas and traffic was snarled as signal lights went dark.

When the quake hit, freelance reporter Manuel Rueda was walking outside a bank in the city's financial district when buildings began to shake. "People here are are used to encountering these types of situations, but this time, I definitely sensed more fear from people," he said on CBSN.

Citizens played a crucial role in rescue efforts, like 26-year-old nutritionist Mariana Morales who was one of many that did everything they could to rescue others.

She wore a paper face mask and her hands were still dusty from having joined a rescue brigade to clear rubble from a building that fell in a cloud of dust before her eyes, about 15 minutes after the quake.

Morales said she was in a taxi when the quake struck, and she got out and sat on a sidewalk to try to recover from the scare. Then, just a few yards away, the three-story building fell.

A dust-covered Carlos Mendoza, 30, said that he and other volunteers were able to pull two people alive from the ruins of a collapsed apartment building after three hours of effort. "We saw this and came to help," he said. "It's ugly, very ugly."

Alma Gonzalez was in her fourth floor apartment in the Roma neighborhood when the quake pancaked the ground floor of her building, leaving her no way out - until neighbors set up a ladder on their roof and helped her slide out a side window.

Gala Dluzhynska was taking a class with 11 other women on the second floor of a building on trendy Alvaro Obregon street when the quake struck and window and ceiling panels fell as the building began to tear apart.

She said she fell in the stairs and people began to walk over her, before someone finally pulled her up.

"There were no stairs anymore. There were rocks," she said.

They reached the bottom only to find it barred. A security guard finally came and unlocked it.

Market stall vendor Edith Lopez, 25, said she was in a taxi a few blocks away when the quake struck Tuesday. She said she saw glass bursting out of the windows of some buildings. She was anxiously trying to locate her children, whom she had left in the care of her disabled mother.

Video on social media showed debris falling from Mexico City's National Employment Service building. Residents can be heard screaming and crying as some ran away from the building.

President Trump tweeted his support for Mexico on Tuesday afternoon: "God bless the people of Mexico City. We are with you and will be there for you."

Former President Barack Obama took to Twitter to express his condolences -- writing in Spanish: "Take care of yourself and a big hug for everyone"

He extends his condolences to the government and people of Mexico and wishes those injured a speedy recovery, according to a statement released by his spokesman.

Earlier this month, dozens were killed after another earthquake struck, off Mexico's southern coast. It toppled hundreds of buildings, triggering tsunami evacuations and sending panicked people fleeing into the streets in the middle of the night.

Dr. Lucy Jones, a seismologist who spent years with the USGS, said Tuesday's earthquake is smaller than the Sept. 7 temblor, but that it struck closer to more residents.

"This earthquake is smaller but closer to many more people. So where the 8.2 was offshore -- and at a depth of 40 miles down -- this is only 80 miles from Mexico City, about 30 miles down, and with a lot of people nearby. Proximity makes a big difference," she told CBS News.

Much of Mexico City is built on former lakebed, and the soil is known to amplify the effects of earthquakes even hundreds of miles away.

"Mexico City is built on dry lake bed. So there was a lake there, it dried out, it left behind these sediments that are very very loose. And so when the seismic waves come through them, the loose soil slows them down, but they still have all that energy so they have to get bigger to carry that loose soil," Jones explained.

"Here in downtown Los Angeles, we have a factor of five amplification because of soils. In Mexico City, it's over a factor of 100."

Mexico City's international airport suspended operations and was checking facilities for any damage.

Initial calculations show that more than 30 million people would have felt moderate shaking from Tuesday's quake. The U.S. Geological Survey predicts "significant casualty and damage are likely and the disaster is potentially widespread.

Meanwhile, nominations for the Latin Grammy Awards have been postponed because of the earthquake and the aftermath of hurricanes Harvey and Irma.

Latin Recording Academy President Gabriel Abaroa Jr. said in a statement Tuesday that the delay comes "as an outgrowth of the terrible and tragic recent natural disasters affecting Mexico, Puerto Rico, Dominican Republic, Houston, and Florida, the homes of many Hispanic communities."

Nomination announcements were scheduled for Wednesday. No new date has been chosen yet.

Abaroa says the academy's "thoughts and prayers are with everyone affected by these catastrophic events and ones that may come."

The Latin Grammy Awards ceremony is still scheduled for Nov. 16 at the MGM Grand Garden Arena in Las Vegas, with a live telecast on Univision.