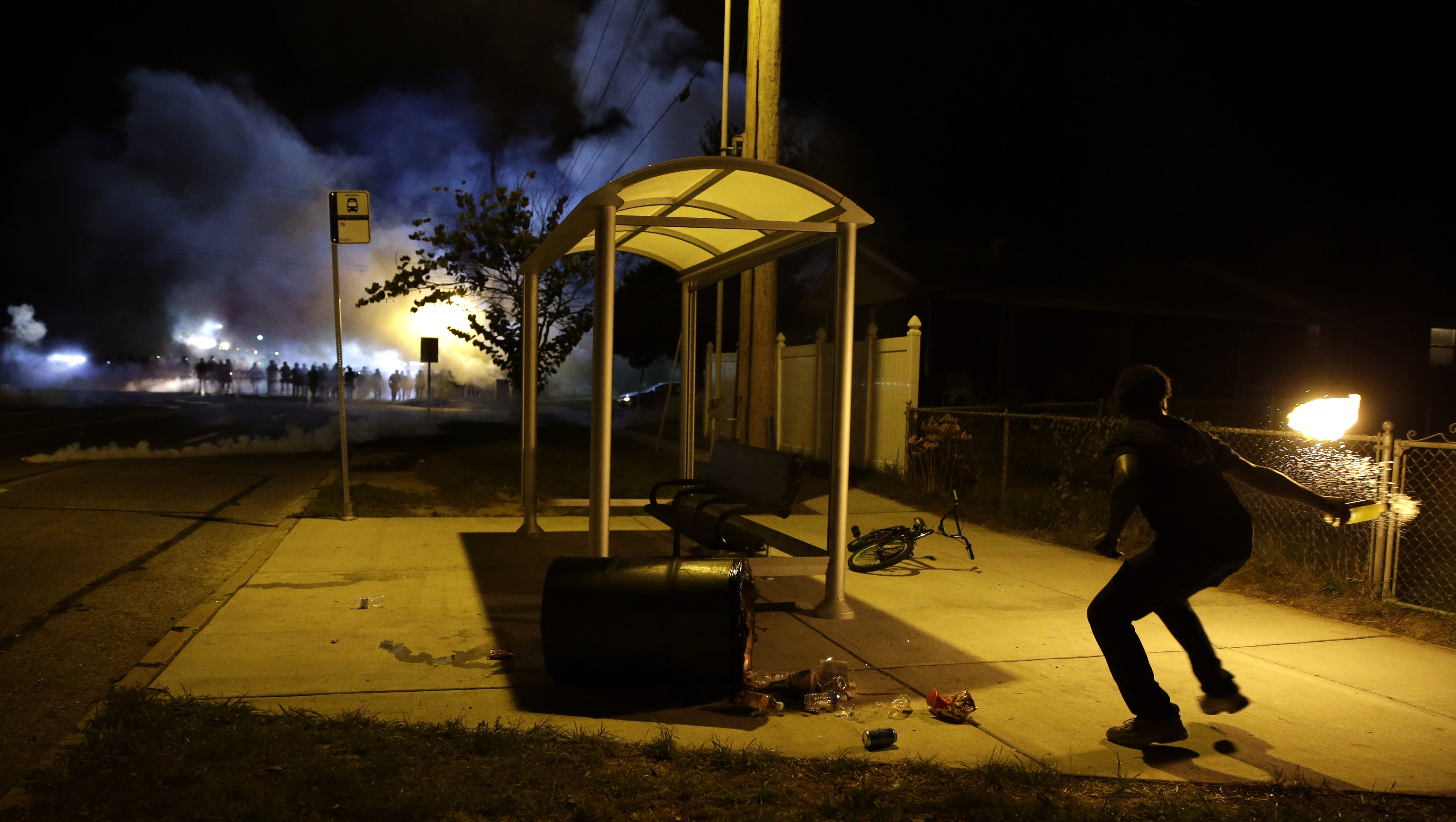 Two reporters said they were detained by police while covering the tensions that have torn Ferguson since the death Saturday of 18-year-old Michael Brown.

Ferguson Police Chief Thomas Jackson told a news conference earlier in the day that the St. Louis County investigation of the shooting could take weeks to complete.

In the meantime, he said, his department welcomes Justice Department training on racial relations in the suburb, where two-thirds of the 21,000 residents are black while all but three of the police force's 53 officers are white.

"Unfortunately, an undertow (of racial unrest) has bubbled to the surface," said Jackson. "Race relations is the top priority right now."

While Jackson said he wanted to mend fences with the community, protesters were on the streets of Ferguson again Wednesday, facing heavily armed police who at times trained weapons on them from an armored truck.

The situation became more tense after nightfall, with police ordering people to go home and then using smoke bombs and later tear gas after some people threw Molotov cocktails at them.

About 50 demonstrators stood in the middle of the street near a Quik Trip convenience store, with several hundred people on side streets, the St. Louis Post-Dispatch said.

"We have to stand and fight here right now!" one young woman screamed as police began firing tear gas.

Earlier, Wesley Lowery of The Washington Post and Ryan Reilly of The Huffington Post said they were handcuffed and put into a police van after officers came in to quickly clear a McDonald's restaurant where they were doing some work. The Post reported that Lowery said that at one point, he was slammed against a soda machine and plastic cuffs were put on his wrists. The reporters were subsequently released without any charges.

Martin D. Baron, the Post's executive editor, issued a statement saying there "was absolutely no justification for his arrest" and that the organization was appalled by the conduct of the officers involved.

Jackson did not immediately return a cellphone message Wednesday night from The Associated Press seeking comment.

Police have Brown was shot after an officer encountered him and another man on the street. They say one of the men pushed the officer into his squad car, then physically assaulted him in the vehicle and struggled with the officer over the officer's weapon. At least one shot was fired inside the car. The struggle then spilled onto the street, where Brown was shot multiple times. In their initial news conference about the shooting, police didn't specify whether Brown was the person who scuffled with the officer in the car, and they have refused to clarify their account.

Dorian Johnson, who says he was with Brown when the shooting happened, has told a much different story. He has told CBS affiliate KMOV and other media outlets that the officer ordered them out of the street, then tried to open his door so close to the men that it "ricocheted" back, apparently upsetting the officer.

Johnson says the officer grabbed his friend's neck, then tried to pull him into the car before brandishing his weapon and firing. He says Brown started to run and the officer pursued him, firing multiple times. Johnson and another witness both say Brown was on the street with his hands raised when the officer fired at him repeatedly.

Some protesters Wednesday raised their arms above their heads as they faced the police. Others held signs asking for answers about Brown's death. The most popular chant has been, "Hands up! Don't shoot!"

Brown's body remained on the street for hours - a span Jackson deemed "uncomfortable" but justified, given that "you only get one chance at that crime scene" to process it correctly. Jackson said authorities also were concerned about gunfire they could hear in a nearby building.

Brown's grandmother, Desuirea Harris, said she heard a commotion and went outside to see her grandson lying dead on the street. She told KMOV the teen had been on his way to visit her.

"He came to visit me and they did that to him for no reason," she said.