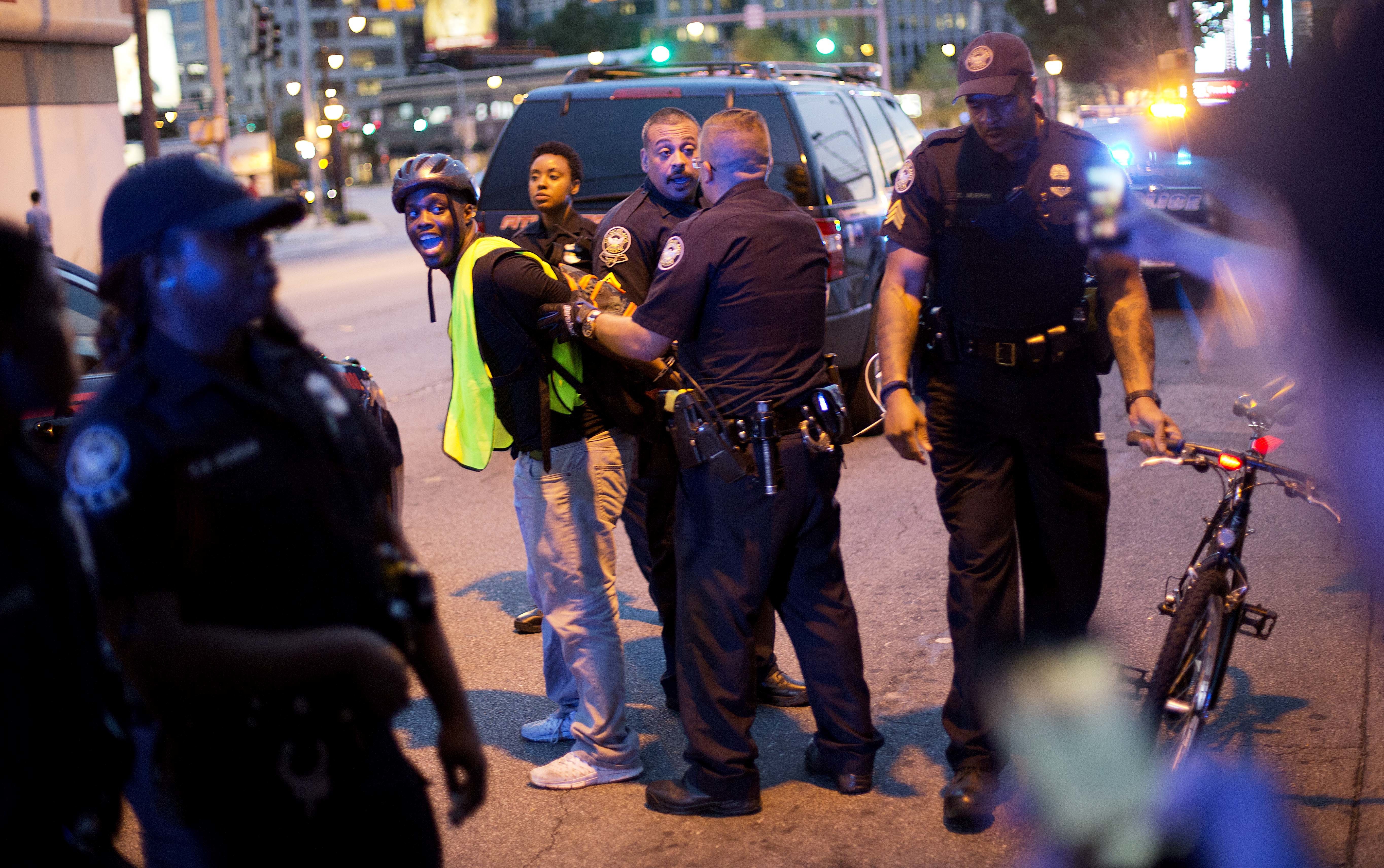 Protests and related events continued nationwide Monday after the police shootings of black men in Baton Rouge, Louisiana, and suburban St. Paul, Minnesota, and the deadly sniper attack on police officers in Dallas.

Here is the latest on protests:

Police protests were calm and lightly attended in Denver on Monday, when a group of about 50 waved signs decrying police killings while a smaller group entered a fourth day of quietly mourning blacks killed by police in the last year.

The demonstrations outside the state Capitol attracted a mixed-race crowd and supporters bringing water, fruit and sandwiches to support the efforts. A handful of police stood watch from about a block away.

The Denver observations were a marked contrast from charged police protests in some cities. None of the protesters attempted to block the streets during a busy lunchtime hour. Instead the protesters kept to a park to wave signs and mourn.

Family of man killed in police pursuit speaks out

Derek Chauvin sentenced to 22.5 years in prison for Floyd's murder

How effective are body-worn cameras in curbing police violence?
More

Protesters say they were inspired to protest by cases around the country of police killing young black men.

Protesters gathered outside the governor's mansion in Atlanta, CBS affiliate WGCL reported. But Gov. Nathan Deal is out of the country.

A woman was detained by Atlanta police in the fifth day of protests, WGCL reported.

As the woman was being detained, there was a brief scuffle in the area where protesters met police officers.

Soon after midnight, WGCL reported the crowd outside the mansion was dispersing, after Mayor Kasim Reed agreed to a two hour meeting with activists this coming Monday morning.

Reed said earlier Monday that about 15,000 people attended various protests this weekend in the city. Reed said 14 people were arrested Saturday and Sunday by the Atlanta Police Department, and two were arrested by the Georgia State Patrol.

About 75 people remained at Piedmont Park until about 2 a.m. Monday, WGCL reported. Some in the crowd talked about the need to get more organized.

Giles Willis came to the rally. He told WGCL he was inspired by his girlfriend who had been protesting for days.

"My girlfriend got pepper-sprayed in the face last night by the cops after they bumped her with their car and then charged her with obstruction or something like that," Willis said. "I had to bail her out of jail."

Willis held a full-length mirror during the rally.

"This is mainly to remind everybody what they look like, what they're representing, reflected right back at them," he said. "Especially for the police that can't even look at themselves in the eyes and see the fear that they have."

"In some cases, they have had bottles of water thrown at them and obscenities and insults shouted at them repeatedly for hours on end yet they've remained calm and professional but they're also exhausted," said Reed said about the officers.

Protesters marched peacefully through Chicago Loop in another day of demonstrations over police methods sparked by the fatal shooting to two black men by white officers in Minnesota and Louisiana.

Monday's demonstration was organized over social media by teenage girls who said they were determined to keep it peaceful.

One group - organized by the teen girls -- staged a sit-in at Millennium Park that turned into a march. They headed to the other side of the Loop, where additional hundreds gathered at Federal Plaza.

The combined group of marchers, estimated to be 1,000 strong, proceeded to march into the evening, at times stopping traffic by blocking intersections.

Chicago police officers, including cops on bicycles, monitored the protesters and followed their march.

The demonstrations in Chicago in recent days have been relatively peaceful, though police scuffled with some protesters Saturday, resulting in 16 arrests.

Dozens of people attended a vigil in Louisville to protest the recent police killings of black men.

The Courier-Journal reports the "Breaking White Silence" event began at noon Monday outside Metro Louisville Police Department headquarters. It was organized by Louisville Showing Up for Racial Justice. A statement from the group says the gathering is part of a national effort to get more white people to voice concerns about racial justice.

Tensions between black citizens and police have risen since last week's killings of Alton Sterling in Baton Rouge and Philando Castile in Minnesota by white officers, and a retaliatory attack on police by a black sniper in Dallas that killed five officers and wounded others.

A Louisiana civil rights group is criticizing law enforcement officers over their treatment of protesters.

The American Civil Liberties Union of Louisiana said Monday that Baton Rouge police "used violent, militarized tactics on groups of people who have gathered peacefully in protest of Alton Sterling's killing." At times, police have used riot gear and military-style vehicles in demonstrations.

Sterling, a 37-year-old black man, was killed Tuesday by two white police officers. His death, captured on video by bystanders, has sparked days of protests.

Authorities have arrested about 200 demonstrators since Friday. Monday night's protests were largely peaceful.

Memphis officials are asking protesters who occupied a key bridge over the Mississippi River Sunday night to attend a meeting where they can voice their concerns.

Memphis Mayor Jim Strickland and Interim Police Chief Michael Rallings said Monday morning that the meeting would be held at 4 p.m. at Greater Imani Church in Memphis as a way to start a dialogue on how to unite the city.

Traffic on Interstate 40 was blocked in both directions for hours after hundreds of angry Black Lives Matter protesters marched onto the bridge to show their anger about police killings of black people. Police in squad cars tried to stop them, but several hundred had already made their way up the ramp, and the crowd swelled to more than 1,000.

Rallings locked arms in solidarity with people marching off the bridge. Several hundred remained until riot police with shields slowly pushed them off.