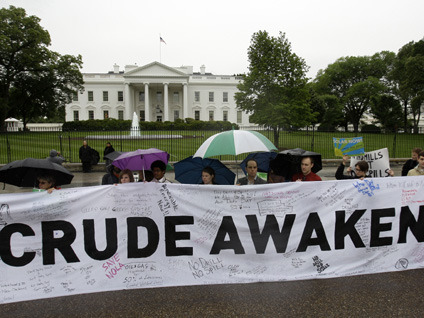 In a demonstration against the BP underwater oil well leak, now in its 15th day, protesters carried a 50 foot long banner in front of the White House to deliver a message to the president.

"Obama - this is your crude awakening," were the words emblazoned on the banner -- conveying the protesters message that offshore drilling for crude oil leads to disasters like the one now defying resolution in the Gulf of Mexico.

"Drill baby drill means spill baby spill - wake up," chanted the 50 or so protesters on Pennsylvania Avenue in front of the White House.

A protest leader with the group Friends of Clean Energy shouted into a bullhorn decrying those who dismiss the underwater gusher of oil as an accident.

"We know that this is an outgrowth of an energy policy running on technology from past centuries," said the organizer.

"Make some noise," he said to the hooting demonstrators. "It's okay to feel angry and upset about this."

Others in the group carried signs reading "Windmills - not oil spills."

The protesters warn that drilling disasters like the one in the Gulf "will continue to happen until America switches to clean safe renewable energies."

In a statement yesterday, the White House said President Obama is calling for independent experts to be brought in by BP and the government to help cap the underwater gusher. He also called for "bringing every perspective to the table to identify potential solutions."