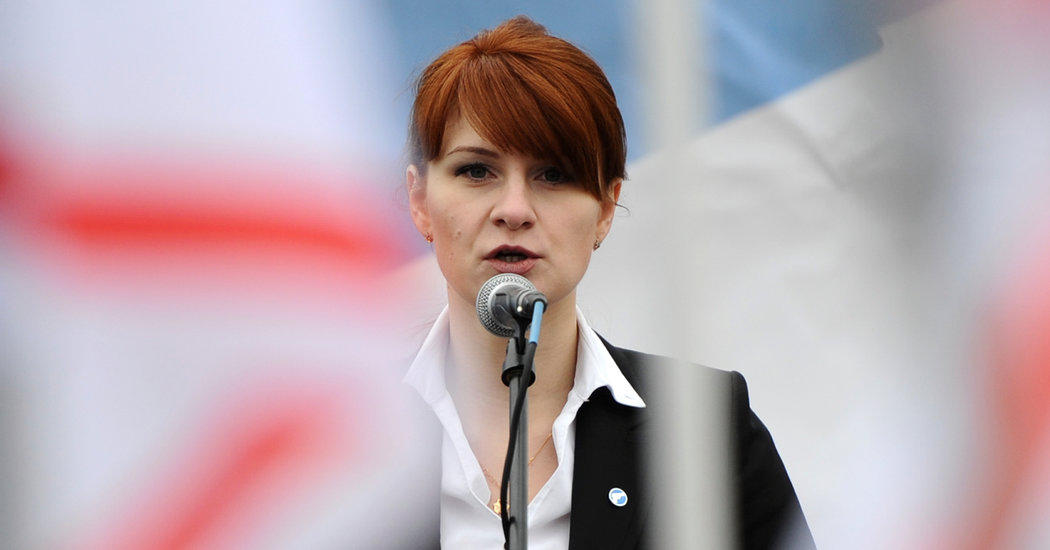 A 29-year-old woman accused of being a covert Russian agent was "likely" in contact with operatives of the successor agency to the KGB while she lived in the United States, prosecutors said Wednesday in court papers.

Maria Butina had contact information for people who, prosecutors say, were employees of the Russia's Federal Security Services, or FSB, according to the government. The FBI also observed her dining privately with a Russian diplomat suspected of being an intelligence operative, in the weeks before the envoy's departure from the U.S. last March.

Prosecutors made the allegations in documents made public before an afternoon hearing in which a judge decided to keep Butina in jail while she awaits trial on charges of conspiracy and acting as an unregistered foreign agent for Russia.

Citing her intelligence ties, the government argued that Butina poses an "extreme" risk of fleeing the U.S., where she has been living on a student visa. In seeking her detention, prosecutors said Butina's "legal status in the United States is predicated on deception."

The judge agreed to keep Butina in detention pending trial after prosecutor Erik Kenerson argued that Butina might flee to the Russian consulate and escape the country in a diplomatic vehicle if released on her own recognizance. He noted the U.S. does not have an extradition treaty with Russia.

Two officers of the Russian consulate were present in the court room. Butina appeared in court before the judge in an orange prison jumpsuit over a white t-shirt, and was not wearing restraints.

Prosecutors allege that Butina lived with and dated a 56-year-old man identified as "U.S. Person 1" but argues that "this relationship does not represent a strong tie to the U.S. because Butina seems to treat it as simply a necessary aspect of her activities." According to prosecutors, Butina offered sex to an individual who is not U.S. Person 1 "on at least one occasion...in exchange for a position within a special interest organization." She also complained about U.S. Person 1 and "expressed disdain" about living with him.

The government also argues surveillance video from the past week shows that Butina planned to leave the country. Her lease on an apartment ends later this month and her bags were packed at the time of her arrest last weekend, prosecutors said. Her personal ties, "save for those U.S. persons she attempted to exploit and influence," are to Russia, according to the government court filing.

"The concern that Butina poses a risk of flight is only heightened due to her connection to suspected Russian intelligence operatives," prosecutors wrote.

Prosecutors also said Butina was regarded as a covert agent by a Russian official with whom she was in touch, with text messages discovered by the FBI showing how the official likened her to Anna Chapman, a Russian woman who was arrested in 2010 and then deported as part of a prisoner swap.

In March 2017, following news coverage of Butina, the Russian official wrote, "Are your admirers asking for your autographs yet? You have upstaged Anna Chapman. She poses with toy pistols, while you are being published with real ones," according to the court filing.

Butina and the official messaged each other directly on Twitter, prosecutors said. One such exchange occurred a month before the U.S. presidential election when Butina said she understood that "everything has to be quiet and careful."

They also spoke on January 20, 2017 when Butina sent the official a photo of her near the U.S. Capitol on the day Donald Trump was inaugurated as president. According to court papers, the Russian official responded, "You're a daredevil girl! What can I say!()" Butina responded, "Good teachers!"

The government has had Butina under surveillance for over a year. In court on Wednesday, prosecutors showed photos of her dining at a Washington, D.C. restaurant with a person they said was a Russian Intelligence officer.

Bustina's lawyers say that photo was taken a movie screening at a Russian cultural event. They insist their client did nothing illegal, has cooperated with U.S. authorities, and was not a flight risk because she could have fled the country any time during the last year.