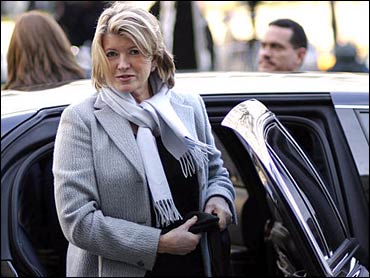 Martha Stewart, as promised, is keeping her fans and supporters informed on the progress of her stock fraud trial. The opening statement of her attorney is prominently displayed on MarthaTalks.com, along with carefully selected excerpts from op ed pieces published in newspapers around the country.

The effect is not unlike quotes from film critics in a newspaper ad for a movie: "Martha Stewart Does Not Deserve Our Derision," "A Show Trial - American Style," "Half-Baked Charges: A Simple Profession Of Innocence Is Seen As Profession Of Guilt," "Justice Gives Herself A Black Eye," and so on.

Contrary to the name of the web site, however, Stewart herself has little to say - and remains an absent voice, a silence so far also maintained in court, where she has yet to testify.

In federal court in Manhattan Wednesday, headphone-equipped jurors heard Stewart's stockbroker give his account of her sale of ImClone Systems stock in a recording the prosecution claims is dotted with lies.

The recording of broker Peter Bacanovic's interview with the Securities and Exchange Commission in February 2002 is the first time jurors at the stock-trading trial have heard either defendant speak.

In the interview, played Wednesday, Bacanovic describes a plan he and Stewart made in December 2001 to sell her 3,928 shares of ImClone if it fell to $60 per share. She sold on Dec. 27 - just before the stock dropped on bad news.

"How low does this have to go before you're prepared to part with this?" Bacanovic claims he asked Stewart.

When Stewart said she didn't know, Bacanovic said he suggested, "Well, how about $60 a share? Does that sound reasonable?"

The government contends Stewart and Bacanovic hatched the story to cover the real reason for the sale on Dec. 27, 2001 - that Bacanovic sent word to Stewart that ImClone CEO Sam Waksal was trying to dump his shares.

Prosecutors followed the Bacanovic tapes by calling to the witness stand an FBI agent who took notes in each of Stewart's two interviews with the SEC in 2002.

By placing the two elements of the case back-to-back, prosecutors hoped to draw out inconsistencies in the explanations Stewart and Bacanovic gave in early 2002 for the ImClone sale.

For example, special agent Catherine Farmer said Stewart claims in the interviews to have spoken to Bacanovic when she sold. Bacanovic said Stewart had spoken to Douglas Faneuil, Bacanovic's assistant.

Stewart also told the SEC that she and Bacanovic had not discussed Waksal in early 2002, when news was breaking of an investigation into Waksal's suspicious trading. Bacanovic said they had.

The Bacanovic tapes were played at a high volume in the courtroom and on wireless headphones worn by jurors. The hour marked a stark contrast from the nine days of standard witness testimony and screen-projected exhibits.

Bacanovic, speaking quickly and often interrupting himself, said in the SEC interview that he never told Stewart that ImClone stock was falling when he left a message for her on Dec. 27 - only that he and his assistant "gave her the price of the stock."

That statement contradicts testimony earlier this week from Stewart's personal assistant, who said she took down this message from Bacanovic on that day: "Peter Bacanovic thinks ImClone is going to start trading downward."

In the recording, Bacanovic claims Faneuil alerted him on Dec. 27 that ImClone was trading near $60. He says he thought: "I just had this conversation. This is someone who gets irascible. And I thought, 'So much for the vacation.'"

Bacanovic was on vacation in Florida at the time.

The government claims the recording also includes lies in Bacanovic's account of meeting with Stewart after the sale. He claims they discussed Waksal but not her ImClone transactions.

Stewart and Bacanovic are each charged with lying to investigators about the ImClone sale. Stewart is also charged with securities fraud, accused of misleading investors in her own company, Martha Stewart Living Omnimedia.

Stewart lawyer John J. Tigue sought to place doubts in jurors' minds about the reliability of the government's account of Stewart's SEC interviews in Feburary and April 2002.

Farmer was the only government agent to take notes at either meeting, and there is no transcript or recording of either.

"Is it difficult, in the course of an interview, to capture everything that is said?" Tigue asked Farmer.

Farmer said it was, but she defended her account of the meetings.