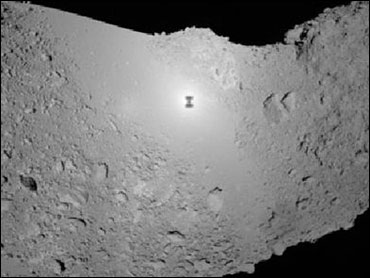 Japan's space agency said Wednesday that a Japanese space probe had successfully touched down on an asteroid despite an initial announcement of a failed attempt.

JAXA officials had said Sunday that the Hayabusa probe, on a mission to briefly land on the asteroid, collect material, then bring it back to Earth, failed to touch down after maneuvering within yards to the surface of the asteroid Itokawa.

However, the agency said in a release Wednesday that data confirmed Hayabusa landed on the surface of the asteroid on Sunday for about half an hour. However, the probe failed to collect material, JAXA said.

On Sunday, Hayabusa dropped a small object as a touchdown target from 130 feet above the asteroid and then descended to 56 feet to the surface, at which point ground control lost contact with the probe for about three hours, JAXA officials had said earlier.

But after analyzing data, the agency confirmed that the probe landed on the asteroid within about 99 feet of the initial landing target, according to the statement.

The agency officials were still analyzing the data and will decide by Thursday whether to conduct a second landing attempt on Friday, according to Seiji Koyama, a spokesman for the space agency.

The mission has been troubled by a series of glitches.

A rehearsal was aborted earlier this month when it had trouble finding a landing spot, and a small robotic lander deployed from the probe was lost. Hayabusa also suffered a problem with one of its three gyroscopes, but it has since been repaired.

Hayabusa was launched in May 2003 and has until early December before it must leave orbit and begin its 290 million-kilometer (180 million-mile) journey home. It is expected to return to Earth and land in the Australian Outback in June 2007.

The asteroid is named after Hideo Itokawa, the father of rocket science in Japan, and is orbiting the sun between Earth and Mars. It is 2,300 feet long and 1,000 feet wide and has a gravitational pull of only 1/100,000th of Earth's, which makes landing a probe there difficult.

Examining asteroid samples is expected to help unlock secrets of how celestial bodies were formed because their surfaces are believed to have remained relatively unchanged over the eons, unlike those of larger bodies such the planets or moons, JAXA said.

A NASA probe collected data for two weeks from the Manhattan-sized asteroid Eros in 2001, but did not return with samples.