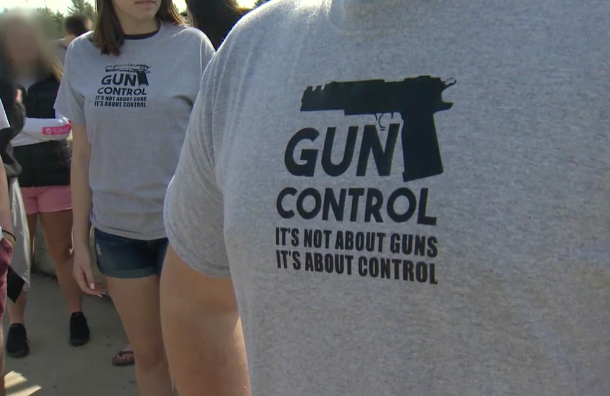 Students across the country staged another walkout over guns, but this time it was in support of the Second Amendment. Teens from more than 500 schools marched for gun rights and ownership on Wednesday, organizers said.

The "Stand for the Second" event was launched in response to student-led walkouts in March to show that not all students agree more gun laws are the answer to protect schools. The March protests against gun violence involved students at thousands of schools from coast to coast; Wednesday's events were more modest in size, but still passionate.

"Students around the country made their voices heard, saying that they support our constitution and oppose gun control," the event's website said. "The student movement to protect our rights is not over."

Stand for the Second was organized by 18-year-old Will Riley, a high school student from New Mexico. The Tea Party Patriots Citizens Fund also assisted in the movement to "protect our natural rights that are enshrined in the constitution," according to its website.

Participants left class at 10 a.m. Wednesday for 16 minutes -- one minute less than the walkouts done last month in memory of the 17 victims killed in the shooting at Marjory Stoneman Douglas High School in Parkland, Florida in February.

Some students who participated in the walkout in East Montpelier, Vermont, spoke to CBS affiliate WCAX-TV.

"There are other solutions than restricting gun rights," said junior Dylan Lawrence.

"Kids shouldn't be dying but people shouldn't be trying to get rid of our constitutional rights either," said Harley DeWald-Emick, a senior.

DeWald-Emick participated in both of the school's walkouts. She says each side has valid arguments but she believes keeping guns out of the hands of people deemed mentally unstable and requiring gun safes could be a start to the solution.

"You can say that it's not guns, it's people," DeWald-Emick said. "But like a high school kid can't walk into a school and kill 17 kids with his bare hands and not be stopped ... a gun also can't shoot a kid by itself."