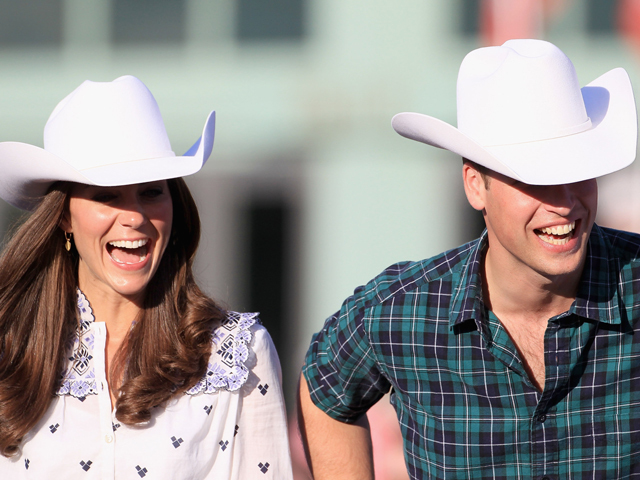 (CBS/AP) CALGARY, Alberta - Prince William and Kate put on white cowboy hats and attended a rodeo show in Calgary on Thursday, one of the last events on the couple's Canadian itinerary before they travel on to California.

The Duke and Duchess of Cambridge both appeared at the event in buttoned-down shirts and jeans. The duchess wore a printed white long-sleeved blouse by Alice Temperley, while the duke opted for a short-sleeved green, blue and white checkered shirt.

"Well, this is different," the prince said with a laugh as he touched the tip of his cowboy hat at a reception later. "We have been hugely struck by the diversity of this beautiful country: from Ottawa to Quebec; from Prince Edward Island to the Northwest Territories; and now the excitement of Calgary - and what about these fantastic white hats."

William, in his last remarks before he leaves Canada for southern California on Friday, said the nine-day trip to Canada exceeded expectations and he promised to return.

"A week ago in Ottawa I spoke of how much Catherine and I looked forward to getting to know Canada and Canadians," he said. "I can only say that the experience of this past seven days has exceeded all our expectations."

"In 1939, my great grandmother, Queen Elizabeth The Queen Mother, said of her first Tour of Canada with her husband, King George VI: 'Canada made us,'" he added. "Catherine and I now know very well what she meant."

William's grandmother, Queen Elizabeth II, remains the head of state in Canada, a member of the British Commonwealth of former colonies.

The royal couple appeared to initially snub their western Canadian hosts by declining the time-honored Calgary tradition of wearing white cowboy hats - but later turned up for the rodeo show decked out in the hats and full western regalia.

The newlyweds, on their first official overseas tour since their April wedding, landed at Calgary's airport on Thursday where they were scheduled to try on the white cowboy hats. But William and Kate opted out after Calgary Mayor Naheed Nenshi, himself sporting a cowboy hat, presented them.

The incident set Twitter abuzz and was a rare misstep for the young royals, who have charmed Canadians at every stop of their tour.

Miguel Head, a spokesman for the Duke and Duchess of Cambridge, told The Associated Press that the couple was looking forward to wearing the hats and "in no way are they snubbing what is a very honored gift."

Sure enough, hours later the royal couple sported the white cowboy hats as they arrived in western wear on a stagecoach in downtown Calgary for a bull riding demonstration.

Canadian Prime Minister Stephen Harper paid tribute to the royal couple, noting the rousing welcome they've received by tens of thousands of Canadians who have been eager to see the newlyweds.

"I have to say we haven't seen a love-in like that since the first visit of the Beatles!" Harper said. "Indeed, everywhere you went you left a trail of utterly charmed Canadians in your wake."

The couple arrived in Calgary after a private break. They spent the night at Skoki Lodge in Banff National Park. Head said they spent their time "exploring the local area on foot and enjoying the peace, tranquility and picturesque scenery around the Lodge."

On Friday, the newlyweds are scheduled to kick off the world-famous Calgary Stampede, the 10-day exhibition and rodeo that celebrates the western way of life.

The royal pair is slated to open the Stampede parade, visit the zoo and meet homeless youth, attend an Alberta government reception and lay a wreath before leaving Canada for Los Angeles.