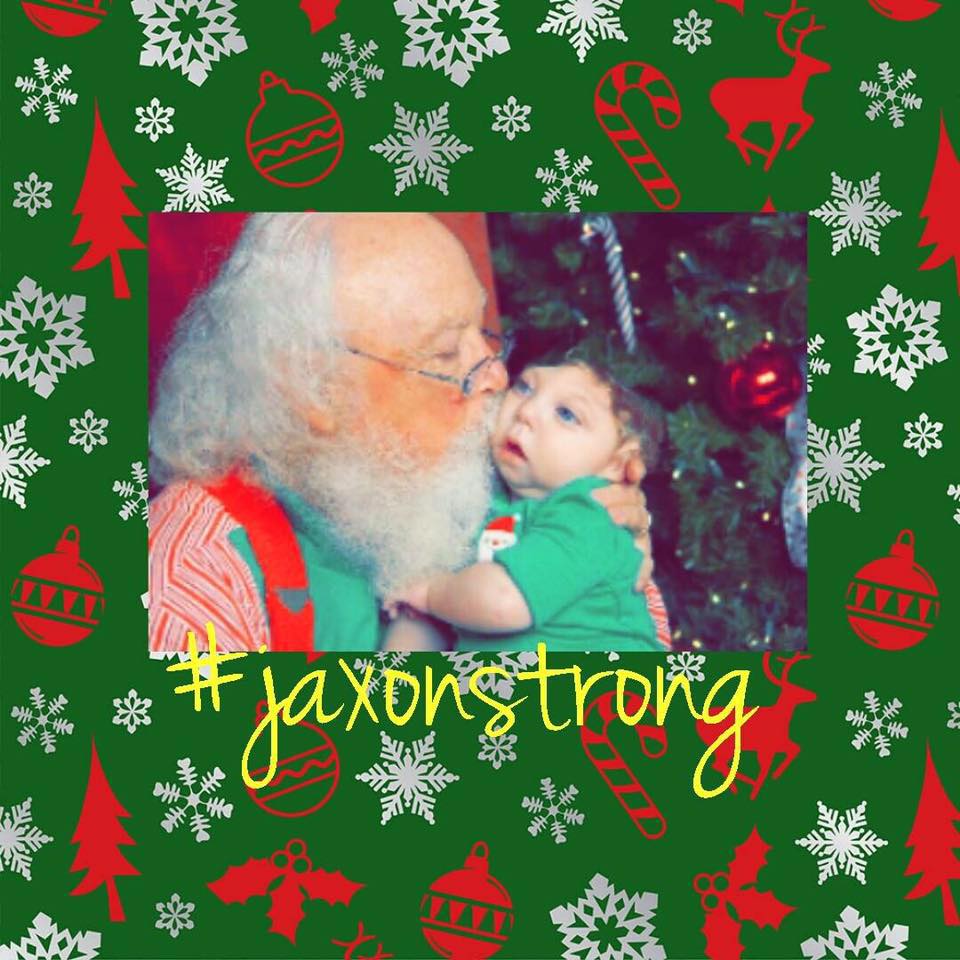 TAVARES, Fla. -- A Florida couple say presents have piled up for their year-old son, whose Christmas card with Santa captivated readers nationwide.

Jaxon Buell first had a small following of family and well-wishers on the Facebook page his parents set up shortly after he was born Aug. 27, 2014, with a rare condition that prevented much of his brain from forming and left half his skull flat.

Doctors discovered something wrong in the baby's head shape during a routine ultrasound when mom-to-be Brittany was pregnant, but they didn't know the exact cause. After Jaxon was born, Brittany and Brandon Buell were told he had a birth defect called anencephaly that occurs when the beginnings of the nervous system form incorrectly early on in the pregnancy. Most babies with the rare condition cannot survive long past birth.

"Every doctor we've talked to is fascinated that Jaxon is here today, and they can no longer predict a prognosis," Brandon Buell wrote in a Facebook post previously. "We know the reality behind this better than anyone else, what Jaxon is up against, and that his life is already miraculous at this point."

Little Jaxon wasn't expected to survive more than a few days after he was born last year.

Tens of thousands of people have liked the "Jaxon Strong" page now, after the baby made national news while being treated at a Boston hospital.

"Now if we go two days without posting something we get messages, 'Where's my blue-eyed angel?' or 'Is he OK?'" his mother, Brittany Buell, told the Orlando Sentinel. "It's amazing and surreal the connection people have with Jaxon. He has followers on every continent besides Antarctica."

A Christmas card showing Jaxon leaning into Santa's ear garnered more gifts and donations for the boy and his parents. Six or seven presents have been arriving daily at the family's Tavares home, the boy's mother said.

"We feel so humbled with the amount of support and love Jaxon has received from his followers online, but even greater has been how his story has been able to help others going through similar situations," said Brandon Buell, Jaxon's father. "His story is going to benefit the medical world and help benefit other families that will walk in a similar path as us in the future."

Jaxon was born with microhydranencephaly and doctors initially said he wouldn't develop motor skills such as smiling, speaking or playing with toys. Over a year later, Jaxon can smile, roll over, say "momma" and "dadda," and he tries to crawl. However, he also has a feeding tube and medications he needs four times a day.

More than $162,000 has been donated to the family. The Buells say they're giving the cash to hospitals researching similar conditions and various medical facilities that have helped them.

"The vast majority of children who have had microhydranencephaly either were aborted or died shortly after birth, so there isn't a lot of similar cases to compare Jaxon to," said Dr. Carl Barr with Florida Child Neurology in Orlando, one of the doctors treating Jaxon. "He's definitely writing his own book. We're all just along for the ride."

About 1 in 4,859 babies are born with anencephaly each year in the U.S., according to the CDC, and most live very short lives. Microhydranencephaly -- the combination of a small head and malformed brain along with an absence of brain hemispheres that are replaced by fluid-filled sacks -- is even more rare and untracked.

Brandon Buell previously said that he believes many people will be positively influenced by learning more about his son's condition and expressed hope that he would be one of the children that makes it to adulthood after he gets through the challenging first year.