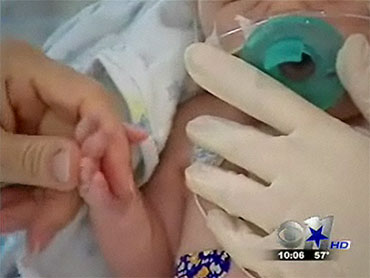 Houston, born March 15 at a Texas hospital, suffers from a defect in his arteries. When his parents, Doug and Kim, applied to have his corrective surgery covered under their insurance, they were denied, with their carrier claiming Houston had a pre-existing condition, reports CBS station KTVT.

The Tracys are fighting the decision by Blue Cross and Blue Shield of Texas.

Legislation passed this week by Congress and signed by President Obama that would end the practice of denying coverage to patients with pre-existing conditions does not go into effect until September.

The congenital heart defect causes the two major vessels that carry blood away from the heart to become switched.

"He was born with what's called transposition of the great arteries," Doug Tracy said. "It's heart wrenching; I hated it."

The Tracy's are both small business owners and do not carry health insurance for themselves. They do carry insurance on their two other children and tried to get insurance for Houston, but they found out Wednesday his coverage was denied.

The health care provider declined to comment specifically on the Tracys' case, and released this statement to KTVT:

"We will work closely with our customers to keep them informed of any changes that may result from the new law. We will continue to review the bill's requirements on our business and their respective time frames to ensure full compliance."

The Forth Worth Star-Telegram received this explanation from Blue Cross Blue Shield of Texas:

Our policy is that if a family has existing coverage with us, a baby can be added to the contract within 31 days without the need for underwriting to assess the baby's eligibility."

The condition Houston has is rarely detected before birth.

"My whole pregnancy was simple, it was easy, no complications, doctor visits were great," Houston's mother, Kim Tracy, said. "Perfect sonograms, great little pictures and then, he wasn't perfect."

Houston had life-saving surgery at Cook's Children's Medical Center in Fort Worth shortly after being born.