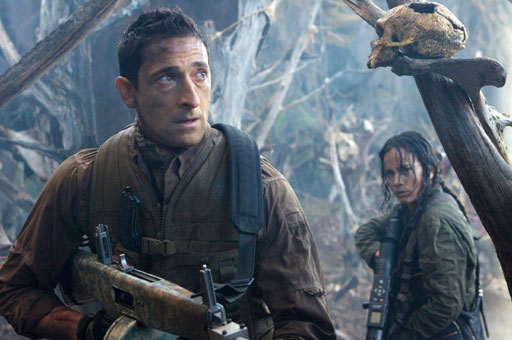 NEW YORK (CBS) It's all about the hunt in this suspenseful 2010 ode to the original.

"Predators" marks the beginning of a new chapter in the sci-fi franchise that drew a cult following after John McTiernan's 1987 film "Predator" starring Arnold Schwarzenegger and Stephen Hopkin's 1990 follow-up, "Predators 2." Oscar-winner Adrien Brody ("The Pianist") picks up the gauntlet embodying a fresh new character after the "Governator" reportedly turned down a return to reprise his original role.

The film is a true sequel to its precursors, referencing both on occasion, with new upgrades to make the film current and relevant. Chronologically, it could be a follow-up to "Predator," but it's still something first-timers can easily absorb.

Brody reportedly gained 25lbs and worked out like a maniac to take on the roll of Royce, a cold-blooded mercenary who is introduced to the audience after freefalling from the sky, landing in a strange jungle surrounded by a group of criminals and elite soldiers, as bewildered by the situation they find themselves thrown into as he is. Royce reluctantly finds himself the leader of a group of 8 international killers, brought together because of their own predatory skills, but now, ironically, served up as prey for their hosts, turning these hunters into the hunted. Their nemesis is a species of super hunter aliens known as Predators, with similarities to the creatures presented in the original.

As the group of mistrusting anti-heroes thrown together fight to survive, they realize that it is their own mercenary skills and tactics that provide them with the ability to foresee the strategies employed by the Predators to entrap them.

Brody is surprisingly believable in his role. He is a killer whose strongest asset is also his biggest weakness. He is a loner, which allows him to be a first-rate assassin, but it's also his greatest weakness as a human being, making him a flawed character the audience wants to learn more about. We do so through his interaction with fellow mercenary Alice Braga ("I Am Legend"), who is a killer with a heart. The two develop an uneasy alliance in the alien jungle while trying to find a way to escape. Laurence Fishburne is excellent as Noland, an ex-military recluse who has managed to survive on the planet.

Filled with well-shot action scenes, "Predators" does what it sets out to do - to provide summer escapism in the form of thrilling action, coupled with a dose of suspense, drama and a fairly decent plot. There are also a couple of curve balls that get thrown the audience's way to keep things moving and make this film a pretty fun ride. At one point the spectre of turning the film into a 3-D movie was raised, but thankfully (for this 3-D weary reviewer, tired of "having to put on the glasses again") producer Rodriguez did not think it was a good idea to do a conversion.

If "Predators" manages to find its footing and if all goes well at the box office, plans are in the works to add to the franchise with more films. Look for the action July 9th nationwide.

Also opening this week is "Despicable Me," another 3-D animated film. Steve Carrell lends his voice to Gru, a wicked villain out to pull off his greatest heist yet - to steal the moon, so he can become the world's greatest villain and (maybe even more importantly) so he can finally win over his tough mother, voiced and performed brilliantly by Julie Andrews, whom he thinks never really loved him. His plans get thrown for a loop with the appearance of three adorable orphaned girls who make him discover something he thought he lost a long time ago - his heart.

Also out July 9 is "The Kids Are All Right" starring Julianne Moore, Annette Bening and Mark Ruffalo. Check out this week's "Showbuzz" to learn more about this upbeat, smart comedy and hear what Moore has to say about the Oscar buzz already swirling around this film that was a sensation at the Sundance Film Festival earlier this year.