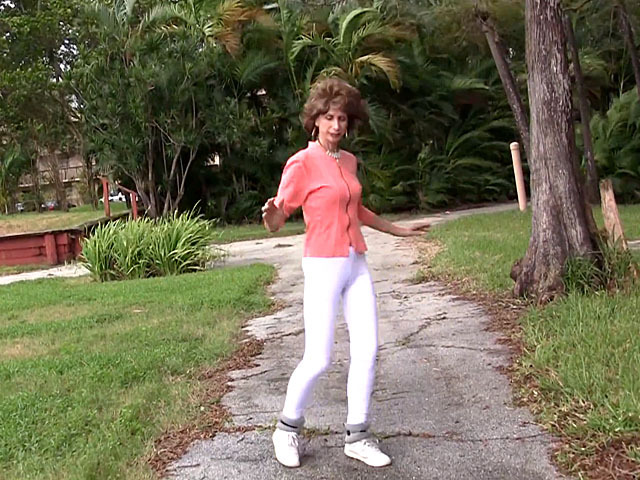 "Prancercise" is sweeping the country, as anyone with an Internet connection may have noticed this week.

A video recorded last December that depicts Prancercise founder Joanna Rohrback showing off the exercise she created in the 1980s went viral this week, and had more than two million views at press time.

While much of the attention she's received pokes fun at Prancercise, one exercise academic who watched the tape backed the horse-like movement as a good form of light-aerobic activity.

"I think it's kind of interesting, I like it," Dr. Charles Platkin, a distinguished lecturer at CUNY School of Public Health at Hunter College in New York City who specializes in exercise and calorie-expenditure research, told CBSNews.com Friday.

Just what exactly is Prancercise? It's a "springy, rhythmic way of moving forward, similar to a horse's gait and ideally induced by elation," Rohrback writes on the exercise's official website.

Billed as an alternative to workouts at the gym, Rohrback says Prancercise aims to get people back into nature with free-spirited exercising while listening to favorite music to stay engaged. Diet is also a crucial component of Prancercise, with instructions that foods that induce cravings should be eliminated. Rohrback has also written a book on the subject, "Prancercise: The Art of Physical and Spiritual Excellence." The Florida woman developed the activity in 1989, according to her bio.

In her now-famous video, she breaks down some of the moves in Prancercise.

"I've got my ankle weights in place and my music's ready, so let's stop talking and do some walking," she begins, before rhythmically moving her arms while prancing around a grass-lined path.

There's the "Prancercise Trot" in which she maintains a steady pace while alternating her arm movements, before she "lets it loose" with the "Prancercise Gallop," a springy-stepped jaunt with wider swings of the arms. The "Prancercise Box, or shadow-box prance" involves ankle weights being moved to the arms where they are used for punching air mid-walk. Watch below:

Platkin took a break from grading his students' finals to review the YouTube tape of the exercises, and using calculations based on metabolic energy tables, concluded that Prancercise is like the low-impact aerobics that were popularized by 1980s workout videos, which he watched side-by-side for his analysis.

"The movements looked very similar," he said. But, can it lead to weight loss and better health?

Prancercise burned about 4.2 calories per minute, Platkin determined, which is similar to walking slowly (about 2.5 milers per hour) while carrying something. About one more calorie per minute can be burned by the Prancercise Trot, he said, pointing out the activity has a similar expenditure as walking briskly while carrying something, like weights. The Prancercise Gallop burned the most -- 5.86 calories per minute -- and is similar to dancing.

Compared to other exercises, Prancercise burns more calories than yoga (2.92 calories per minute), he said, and given the equestrian connection with the exercise, Platkin also compared it to horseback riding and found comparable calorie burning (4.687 calories per minute).

Brisk race walking, however, can burn more calories than Prancercise, about 7.6 per minute, Platkin said.

It's low-impact, so Prancercising appears to be safe too. Platkin also conducted a literature search on ankle weights and determined they could lead to even more calories burned if used during the exercise, but pointed out the weights are linked to joint issues in the knees, hips and legs for some people not in good health.

Considering most people aren't getting the government recommended 2.5 hours of moderate-intensity aerobic exercise or 1.5 hours of vigorous-intensity each week -- a May study from the CDC found 80 percent of American adults are not -- Platkin said anything that gets you moving more is a good form of exercise.

He especially liked the spiritual aspect of Prancercise, including the instructions from Rhorback to imagine yourself as a horse that have become Internet fodder. He said combining spirituality with an aerobic activity could make people more likely to adhere to exercising, when much of the battle with exercise is finding a routine you can stick to.

"Also the cuteness, different factor may be attractive to people," said Platkin.

For her part, Rohrback is being a great sport about her new-found fame, telling The Daily Beast Thursday she's enjoying the buzz on Prancercise, even if people think her workout is wonky.

People who say she is "spooky and goofy and weird and wacky. I say bring it on," said Rohrback. "I love it. Look at all the attention it's getting me. If I wasn't all those things, I wouldn't be who I am."

She however expressed with dismay that she's been so busy with interviews that she hasn't had time to Prancercise.