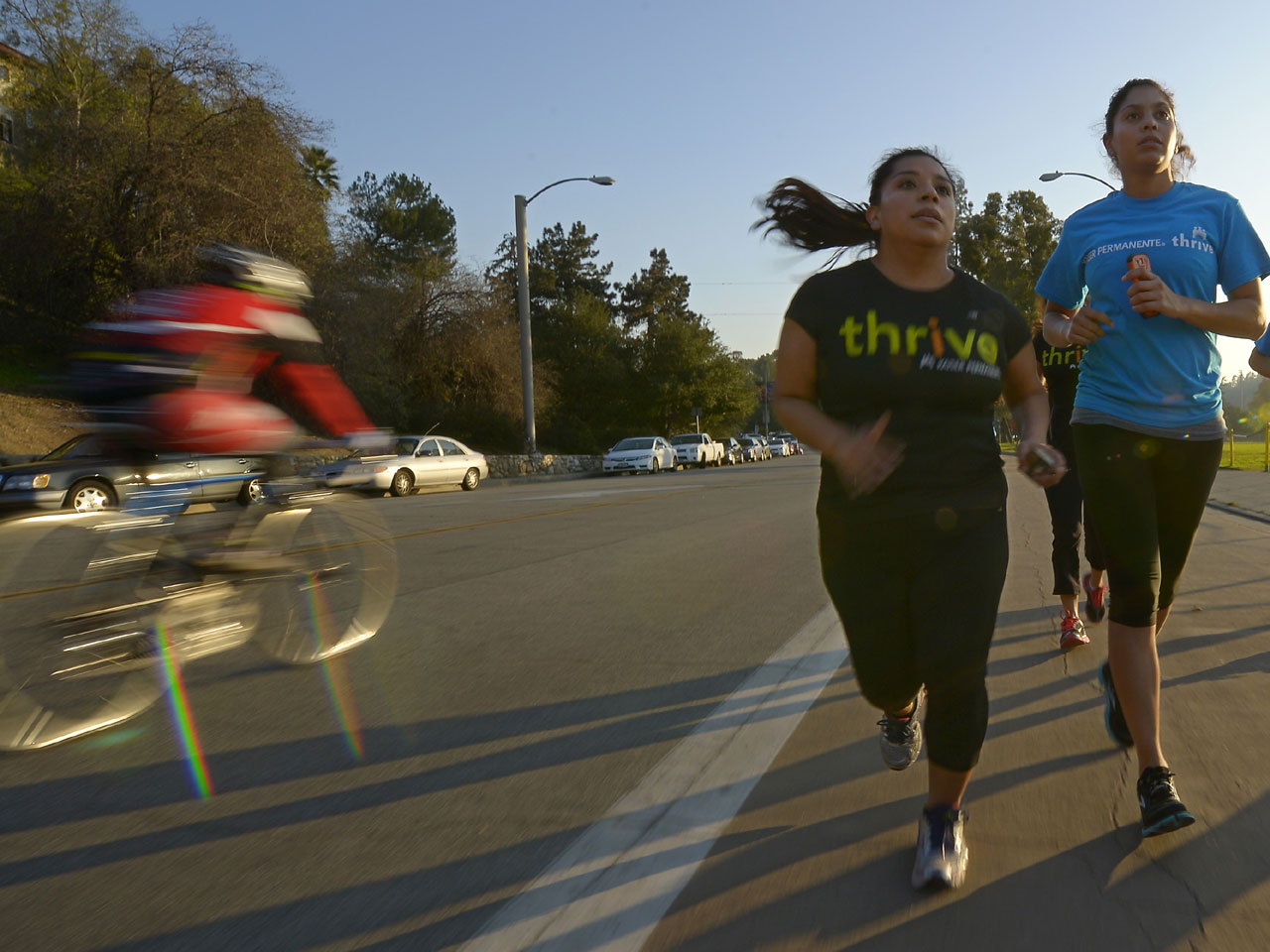 If you're a runner, a new study suggests you may be able to slow down and still gain the same health benefits.

A study of almost 50,000 Americans finds brisk walking can be just as effective at reducing heart health risks like high blood pressure and cholesterol as going on a full-speed run.

"People are always looking for an excuse not to exercise, but now they have a straightforward choice to run or to walk and invest in their future health," study author Dr. Paul T. Williams, a principal author and staff scientist at Lawrence Berkeley National Laboratory, Life Science Division in Berkeley, Calif., said in a press release.

For the study, published April 4 in Arteriosclerosis, Thrombosis and Vascular Biology, researchers compared the cardiovascular health of participants enrolled in two ongoing studies: The National Runners' Health Study, with a pool of more than 33,000 runners, and the National Walker's Health Study that contains more than 15,000 Americans. All runners were between the ages of 18 and 80 (with many clustered in their 40s and 50s), with men representing about 20 percent of walkers and more than 50 percent of runners.

The researchers were comparing the total running expenditure based on amount of time participants were running or walking. They compared these self-reported cardio exercise times with rates of hypertension (high blood pressure), hypercholesterolemia (high cholesterol), diabetes and coronary heart disease, as diagnosed by a doctor.

The researchers found walking reduced risk to be diagnosed with either hypertension or hypercholesterolemia by 7 percent each, compared with about a 4 percent risk reduction for both seen in the runners.

Runners were 12.1 percent less likely to be diagnosed with diabetes, compared to 12.3 percent in walkers. Walking reduced heart disease risk by more than 9 percent, compared with 4.5 percent in the runners.

The more people exercised, the better their health, the researchers found.

"The more the runners ran and the walkers walked, the better off they were in health benefits. If the amount of energy expended was the same between the two groups, then the health benefits were comparable," said Williams.

Though the study found benefits regardless of exercise intensity, the researchers noted runners are likely to cover more ground when they exercise, which could lead to more health benefits.

"Walking may be a more sustainable activity for some people when compared to running, however, those who choose running end up exercising twice as much as those that choose walking. This is probably because they can do twice as much in an hour," he added.

Williams hopes his study provides a message that exercise is an investment in future health.

Less than one-half of Americans engage in the minimum-recommended amount of physical activity of 2.5 hours a week, a 2012 study from the Centers for Disease Control and Prevention(CDC) found. The report, however, did show 62 percent of Americans went on a 10-minute walk each week, up from 56 percent five years ago.

Dr. Charles Platkin, a distinguished lecturer at CUNY School of Public Health at Hunter College in New York City who researchers exercise and calorie expenditure, told CBSNews.com that previous studies have shown working out, regardless of intensity, can lead to another health benefit -- a reduced risk for obesity.

What's great about the new study, said Platkin, who was not involved in the research, is that it showed the same is true for cardiovascular health. He thinks the aging population could especially benefit from this advice, because running can impact the joints and present other challenges for seniors.

"It's going against what you'd think would be the best thing (for your health)" said Platkin, "which is really good news for those who are not so active."

His suggestion for those who say they don't have enough time to exercise? Make walking a utility in your life, meaning don't think of it as exercise, but attach a necessary activity to your walk. For example, he recommended every time you go to the post office, walk there instead of driving.

"Eventually it becomes your habit," he said.