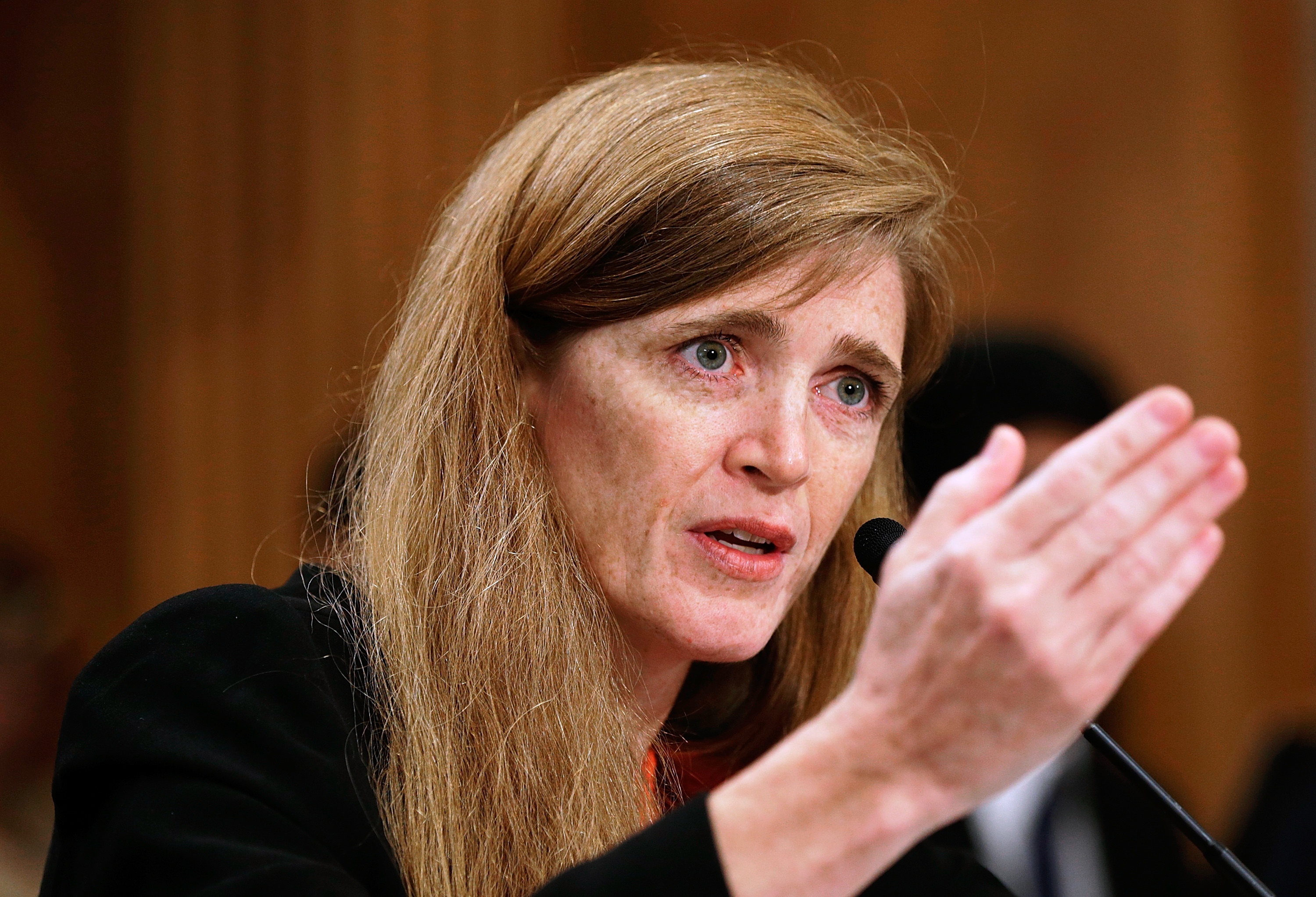 Samantha Power, President Obama's nominee to replace Susan Rice as the U.S. ambassador to the United Nations, slammed the U.N. during her confirmation hearing, saying the inability of the U.N. Security Council to play a more vigorous role in the conflict in Syria, was a "disgrace."

"The failure of the U.N. Security Council to respond to the slaughter in Syria is a disgrace that history will judge harshly," Power told the Senate Foreign Relations Committee Wednesday.

"What we have sought to do, as you know, is not simply rely on the Security Council but to proceed with a multifaceted approach aimed at isolating the regime, bringing about the end of the regime, strengthening the opposition," she added. "We have worked through the General Assembly to signal just how isolated Syria is, even as the Security Council remains paralyzed."

On Russia and China, she said, "I think we have to be clear-eyed about our prospects for bringing the Russians in particular on board at the Security Council and not overly optimistic. By the same token, their interests also are imperiled with the rise of terrorism in the region, with the use of chemical weapons, and we will continue forcefully, repeatedly, to make that argument to Russian officials and to engage them, given the urgency and, again, the devastating human consequences of allowing this crisis to persist."

Power met little resistance during her confirmation hearing before the Foreign Relations Committee.

"People were quite positive," a Capitol Hill staffer told CBS News; the committee is expected to vote on her nomination on Tuesday and the full Senate will vote shortly thereafter, according to committee chairman Sen. Robert Menendez, D-N.J. With the expedited schedule Menendez called for, Power may very well make it to U.N. headquarters while the U.S. ambassador is the president of the Security Council in July.

The hearing began with Menendez painting a picture of Power as an "unrelenting, principled voice when it comes to human rights and crimes against humanity."

And, at a time when the Senate is more polarized than it has been in recent memory, Power has unusual bipartisan support from both parties because of her policy advocacy of intervention, most recently in the case of Libya and Syria, as well as because of her critique of the U.N.

She also talked about Darfur, about the U.N. budget, Iran's nuclear ambition and Syria, the Middle East, women's empowerment, AIDS in Africa, and the gamut of peacekeeping missions, showing her qualifications and her long-term commitment to foreign affairs.

Citing two prior U.N. ambassadors, Daniel Patrick Moynihan and Jeane Kirkpatrick, she talked about her disillusionment when the U.N. stood by while thousands of men and boys were executed in Srebrenica, Bosnia, a town which should have been protected by U.N. peacekeepers.

Her point was clear: Power took the hearings as a moment to give her somewhat ambitious idea of how to "fix" the U.N.

"The war in Bosnia didn't end because the U.N. was shamed by the massacres in Srebrenica. It ended because President Clinton, backed by a bipartisan coalition in Congress, decided that American values and interests were imperiled and acted to end the war. It is now possible to imagine an AIDS-free generation in Africa not merely because of the essential work of UNAIDS, but because President George W. Bush decided to provide life-saving drugs on a massive scale."

American leadership, she said, was the key to some of the more intractable problems in the world. But Power balanced her critique of the U.N. with the message of what the U.N. can do well and she cited, "terrorism, nuclear proliferation, and pandemics," and said that the U.N. can have greater impact when sanctions against Iran and North Korea are multinational.

Power's critique of the U.N.'s approach to Israel answered some of the questions that have been raised by early statements in her career and raised in the hearing by Sen. Marco Rubio, R-Fla.

She argued during her opening statement that the "General Assembly and Human Rights Council continue to pass one-sided resolutions condemning Israel above all others. Israel - not Iran, not Sudan, not North Korea - is the one country with a fixed place on the Human Rights Council's agenda. Israel's legitimacy should be beyond dispute, and its security must be beyond doubt."

What became clear in the Senate hearing is that there is little question that Power's credentials qualify her for a U.S. ambassadorial post: Irish-born and U.S.-naturalized, she won a Pulitzer Prize for a book about genocide and has been an Obama policy adviser on multilateral issues, after working on his presidential campaign.

How will she stack up to the likes of previous U.N. ambassadors like Henry Cabot Lodge, Arthur Goldberg, Adlai Stevenson, Richard Holbrooke, John Negroponte and her predecessor Susan Rice? The most effective U.S. ambassadors have had the ear of the president, and that, she clearly does. Whether or not she can, as many before her have tried, reform the U.N. is a taller task.