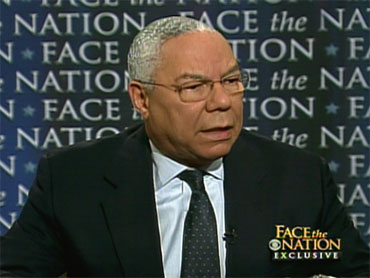 Claims that the United States is less safe under President Obama are not credible, former Secretary of State Colin Powell said on "Face the Nation" Sunday.

He also challenged criticism by some (including former Vice President Dick Cheney, who say that by not using extreme interrogation techniques such as waterboarding on terror suspects the United States is more vulnerable.

"The Transportation Security Administration created by George Bush is still in action working in our airports; they take care of me every day that I go to an airport," Powell told moderator Bob Schieffer.

The Office of the Director of National Intelligence was also created under President Bush, "and it is still under President Obama working hard," he said. "Our counterterrorism authorities and forces are hard at work. Our law enforcement officials are hard at work. We have gone after the enemy in Afghanistan with 50,000 more troops, more predators are striking al Qaeda and Taliban leaders in Pakistan. We have continued the policies that President Bush put in place with respect to Iraq.

"The bottom line answer is the nation is still at risk. Terrorists are out there. They're trying to get through. But to suggest that somehow we have become much less safer because of the actions of the administration, I don't think that's borne out by the facts," Powell said.

He admitted he was "surprised" by the lack of coordination among different agencies in dealing with Umar Farouk Abdulmutallab, the suspect in the Christmas Day bombing attempt of an airliner.

"Should he have been given his Miranda rights either after 90 minutes or 15 hours? The story kept changing," Powell said. "I would have thought after all these years we would have had a process in place - either in the previous administration or in this administration - that when you get somebody like that, we all know how to respond and how to interrogate him, or not interrogate him. But he's in jail. He's facing trial. I don't think it will be a difficult trial to handle. And also he's still talking. They found other ways to interrogate him."

Powell stuck by his conviction that Guantanamo Bay prison facility should be closed. "I think Guantanamo has cost us a lot over the years in terms of our standing in the world and the way in which despots have hidden behind what we have at Guantanamo to justify their own positions," he said.

"I think we ought to remove this incentive that exists in the presence of Guantanamo to encourage people and to give radicals an opportunity to say, 'You see? This is what America is all about. They're all about torture and detention centers.'"

"Let's get this population of 192 sorted out," Powel said, adding that "I have no problem with them being tried here in the United States."

However, while he favors a federal court trial for Kaleid Sheik Mohammed, he said he would not have picked downtown New York City to try the alleged mastermind of the 9/11 attacks, opting rather for a secure military base, "where it would not become a circus."

Transcript: Sen. Rick Scott on "Face the Nation"
Thanks for reading CBS NEWS.
Create your free account or log in
for more features.
View CBS News In
CBS News App Open
Chrome Safari Continue
Be the first to know
Get browser notifications for breaking news, live events, and exclusive reporting.