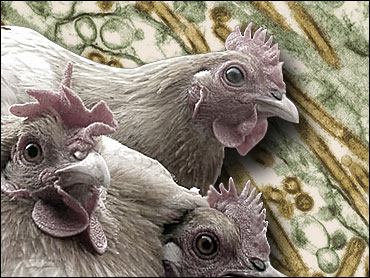 Scientists have discovered the possible presence of bird flu in wild mute swans in the upper Midwest state of Michigan, but it does not appear to be the most worrisome, highly pathogenic strain, the White House announced Monday.

"They believe it is a strain of low pathogenicity, similar to strains that have been seen before in North America," White House spokesman Tony Snow said.

Testing is still being done to confirm the presence of the H5N1 virus and its type. Officials with the Agriculture and Interior departments were to announce details later Monday morning.

Scientists had feared that the deadly H5N1 strain of bird flu would reach North America, in birds, sometime this year. Just last week, the U.S. expanded monitoring of wild migratory birds throughout the nation, to check for early warning signs.

However, health officials stress that the virus' appearance in wild birds would not be a public health crisis, especially if it were the less worrisome, low-pathogenic strain.

The H5N1 virus has killed at least 138 people worldwide since it began ravaging Asian poultry stocks in late 2003. But virtually all caught the virus from close contact with sick birds or their droppings.

Health officials are closely watching H5N1's march around the globe for fear the virus eventually could mutate into a strain that could spread easily from person-to-person, possibly sparking a worldwide epidemic. No one knows how likely that is to happen, and specialists agree that the risk doesn't jump even if a few infected birds are found to have entered the U.S.

But if that happens, it could trigger additional security steps, especially to prevent wild birds from infecting U.S. poultry flocks, and more stringent monitoring.

Wild birds, especially waterfowl, carry a multitude of flu viruses — and officials have repeatedly warned that this first batch of testing could produce a lot of false alarms.

Only confirmatory tests that will take several more days, possibly up to 10, can tell whether a suspect bird really has H5N1 or some other harmless flu strain. If so, that testing also will confirm whether the virus is the so-called "high-pathogenic" version, the deadly type, or a so-called "low-pathogenic" version, a mild type not of concern for humans.