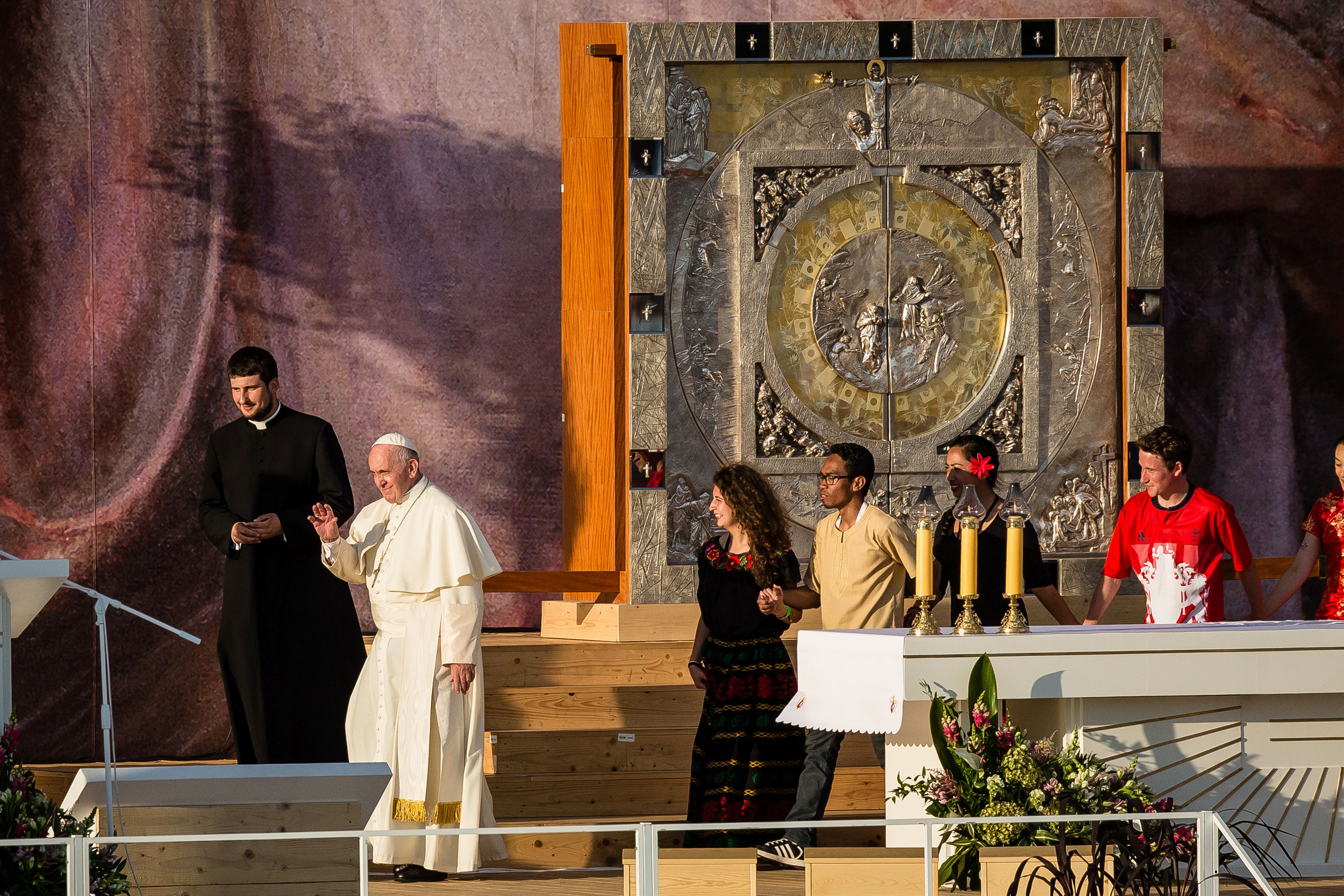 BRZEGI, Poland - Pope Francis challenged hundreds of thousands of young people who gathered in a sprawling Polish meadow to reject being a "couch potato" who retreats into video games and computer screens and instead engage in social activism and politics to create a more just world.

Peppering his speech with contemporary lingo, the 79-year-old pope, despite a long day of public appearances, addressed his eager audience with enthusiasm Saturday on a warm summer night.

Francis spoke of a paralysis that comes from merely seeking convenience, from confusing happiness with a complacent way of life that could end up depriving people of the ability to determine their own fates.

"Dear young people, we didn't come into this world to 'vegetate," to take it easy, to make our lives a comfortable sofa to fall asleep on. No, we came for another reason: To leave a mark," Francis told a crowd that Polish media estimated at over 1 million in a huge field in Brzegi, a village outside the southern city of Krakow.

Organizers said 1.6 million people came to hear the pope Saturday night, but police did not give a crowd estimate.

Francis decried a modern escapism into consumerism and computers that isolates people. The same message ran through a ballet performance at the site before his speech: a lonely woman seeks human connections but is rebuffed by people on computer tablets and cellphones until one man emerges from behind a see-through barrier to connect.

For Francis, Jesus is the "Lord of risk ... not the Lord of comfort, security and ease."

"Following Jesus demands a good dose of courage, a readiness to trade in the sofa for a pair of walking shoes and to set out on new and uncharted paths," Francis said.

He challenged his sea of listeners, spread out on blankets, to make their mark on the world by becoming engaged as "politicians, thinkers, social activists" and to help build a world economy that is "inspired by solidarity."

"The times we live in do not call for young 'couch potatoes,'" he said to applause, "but for young people with shoes, or better, boots laced."

Like a politician working a crowd, Francis yelled out to his audience: "You want others to decide your future?" When he didn't get the rousing "No!" he was going for, he tried for a "Yes."

"You want to fight for your future?" he asked.

"The pope does not order us to do things, he encourages us," Szymon Werner, a 32-year-old from Krakow who was at the meadow, told The Associated Press. "It's true, there are many temptations, weaknesses in life and we should try to do something about them."

"I will give more attention to my family," he vowed. "Last night, I gave a lift to some foreign pilgrims who missed their bus - so I think the pope's presence is working!"

Francis' evening appeal came hours after he celebrated a Mass with priests, nuns and young seminarians whom he also urged to leave their comfort zones and tend to the needy in the world. He said Jesus wants the church "to be a church on the move, a church that goes out into the world."

That homily came at a shrine dedicated to St. John Paul II, the Polish pontiff whose staunch defense of workers' rights in the 1970s and '80s challenged his nation's then-Communist rulers.

A year after John Paul II was elected pope in 1978, he returned to his homeland, urging millions of his beleaguered compatriots behind the Iron Curtain - in nuanced and coded words - to oppose communism and defend individual freedoms. That visit inspired the birth of Solidarity, a labor movement that eventually became a key factor in the collapse of communism in 1989 in Poland and throughout Eastern Europe.

Francis has carried a grueling schedule since arriving in Poland on Wednesday, making his first-ever visit to Eastern Europe. On Friday he visited the Nazi German death camp of Auschwitz-Birkenau, where he met with concentration camp survivors as well as aging saviors who helped Jews escape certain doom.

The pope ends his visit to Poland on Sunday after a Mass in the same meadow in Brzegi, the crowning event of this year's world jamboree for young Catholics.