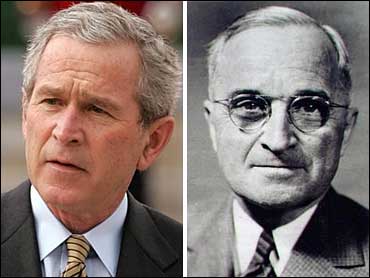 This column was written by Alan Dowd.

Thousands of troops have died fighting a war he chose to fight — a war that increasingly appears to be a microcosm of something much larger than what the American people had bargained for. He seems to be stretching presidential power beyond what his predecessors ever imagined. His approval ratings hover around the freezing point. It's no coincidence that his party is beginning to stray from him, and the press is writing him off as a failure.

What sounds like a thumbnail sketch of George W. Bush in 2006, is actually a description of Harry S. Truman's nightmarish 1950. In fact, these underestimated and oversimplified presidents have more in common than commonly thought.

As Niall Ferguson reminds us in "Colossus," after peaking at 81 percent in the middle of 1950, Truman's approval rating plummeted to 26 percent in early 1951. The main cause of both the rise and fall was Korea. The patriotic lift Truman enjoyed after coming to South Korea's defense in late June 1950 was short-lived. By the time midterm elections rolled around in November of that year, the body bags were streaming back across the Pacific. Not surprisingly, Truman's Democrats lost 28 seats in the House and another 5 in the Senate on Election Day.

We don't know what will happen this fall, but with U.S. troops dying at a rate of one or two a day in Iraq — and Bush's approval ratings now sagging in the 30 — a repeat of 1950 is not out of the question.

Speaking of approval ratings, Truman didn't pay much attention to them. "It isn't polls or public opinion of the moment that counts," he said. "It is right and wrong and leadership." Likewise, friend and foe alike have criticized Bush's apparent contempt for polls. As he put it in 2004, "I'm not a poll-watcher." His stubborn refusal to change course on Iraq and a host of other policies underscores that he means what he says. It also underscores a willingness to take big risks.

Indeed, for Truman and for Bush, the higher the stakes, the bolder the response. It pays to recall that Truman used a city-killing weapon (twice) and brandished it many other times; drew a line around Moscow's empire and promised to wage global war if Stalin crossed it; and spent billions to rebuild European industry and revive European democracies.

Likewise, Bush has banished al Qaeda's stateless killers to endless sentences in a hopeless place; launched a preventive war; sacrificed thousands of American lives and hundreds of billions of dollars to plant democracy in the barren Muslim Middle East; and claimed new powers to defend the nation from its enemies.

One wonders how those who fret and fuss over Bush's wartime expansion of executive power would have reacted to Truman's. After all, Truman tried to nationalize the country's steel mills in a bid to preempt a strike, citing the war in Korea as his justification. He created the super-secret National Security Agency by executive fiat, with the goal of having a central node for monitoring and deciphering information from all over the globe. He proudly endorsed a "federal loyalty program [that] keeps Communists out of government." And he oversaw the creation of the CIA and the retooling of the FBI. "We have an FBI and a Central Intelligence Agency defending us against spies and saboteurs," he boasted.

There are also stylistic similarities between Truman and Bush. Compare the straightforward, even blunt speaking style of the two men.

In his essential "Modern Times," historian Paul Johnson recounts an episode when Truman summoned the Soviet foreign minister to his residence to "let him have it," in the president's words. "It was the straight one-two to the jaw," Truman later bragged. The man on the receiving end, V.M. Molotov, agreed. "I have never been talked to like that in my life," he said. Truman's response: "Carry out your agreements and you won't get talked to like that."

It's not hard to imagine the current president saying something similar. Bush is, after all, the man who invoked the Old West to rally the American people after September 11, explaining that bin Laden was "wanted, dead or alive." In the same manner, he chose plain-spoken words rather than soaring rhetoric to defend his decision to go to war in Iraq, with or without U.N. approval: "America will never seek a permission slip to defend the security of our people."

Truman, too, had no time for nuance. Things were black and white, right and wrong: "Nazi, communist, Fascist or Franco or anything else — they are all alike," he vented in a diary entry. "The police state is the police state; I don't care what you call it."

For Bush, just substitute Kim Jong-Il's Stalinists, Saddam's Baathists, Iran's Islamists, and bin Laden's jihadists — they are all alike, all part of an "axis of evil" bent on doing harm to America.

To read the sweeping pronouncements of Truman and Bush — their pledges of freedom and security, calls to sacrifice and leadership, warnings about terror and tyranny — is to watch America come to grips with its place and purpose in the world.

Truman's initial plan was simply to bring the troops home, but then he promised to rebuild postwar Europe and Japan, then to protect them, then to defend free peoples all around the world. He ultimately wanted the entire world "to adopt the American system" of free markets and free government.

Somewhere along the way from the Potsdam Conference to the Berlin Airlift, he transformed U.S. foreign policy with a doctrine that committed the American people to support any nation "resisting attempted subjugation by armed minorities or by outside pressures." To carry out that doctrine, he poured unheard-of sums into a standing peacetime army and oversaw the creation of the Department of Defense, National Security Council, and Joint Chiefs of Staff to wage a new kind of war. He signed on to permanent defense treaties in Western Europe and the Pacific, opened the door to scores of other entangling alliances, authorized global covert operations, repackaged war as police action, and justified it all because of the nature of the enemy and the omnipresent threat it posed. "If we falter in our leadership," he warned, "we may endanger the peace of the world — and we shall surely endanger the welfare of our own nation."

In the same way, Bush's post-9/11 vision has widened from simple self-defense to preventive war to the end of tyranny itself. "The survival of liberty in our land increasingly depends on the success of liberty in other lands," he intoned in 2005. "America's vital interests and our deepest beliefs are now one."

Contrary to what most history books tell us, Truman's doctrine wasn't a postwar panacea or readymade roadmap for waging the Cold War. Instead, as Derek Leebaert explains in "The Fifty-Year Wound," the Cold War's first four years — which coincided with Truman's first four years as president — "were filled with starts and stops rather than any considered policy or long-range goals."

When Truman left the White House, he was generally considered neither particularly successful nor popular. His decision not to seek a third term (even though he was the last president permitted to do so) was evidence of his waning political strength. Yet today, he is ranked among America's greatest presidents.

This is not to say that Bush is destined for a Trumanesque legacy, of course; but neither is he doomed to failure. Tomorrow's historians — not today's polls or pundits — will render the final verdict.

Alan Dowd is a senior fellow at Sagamore Institute for Policy Research.
By Alan Dowd
©