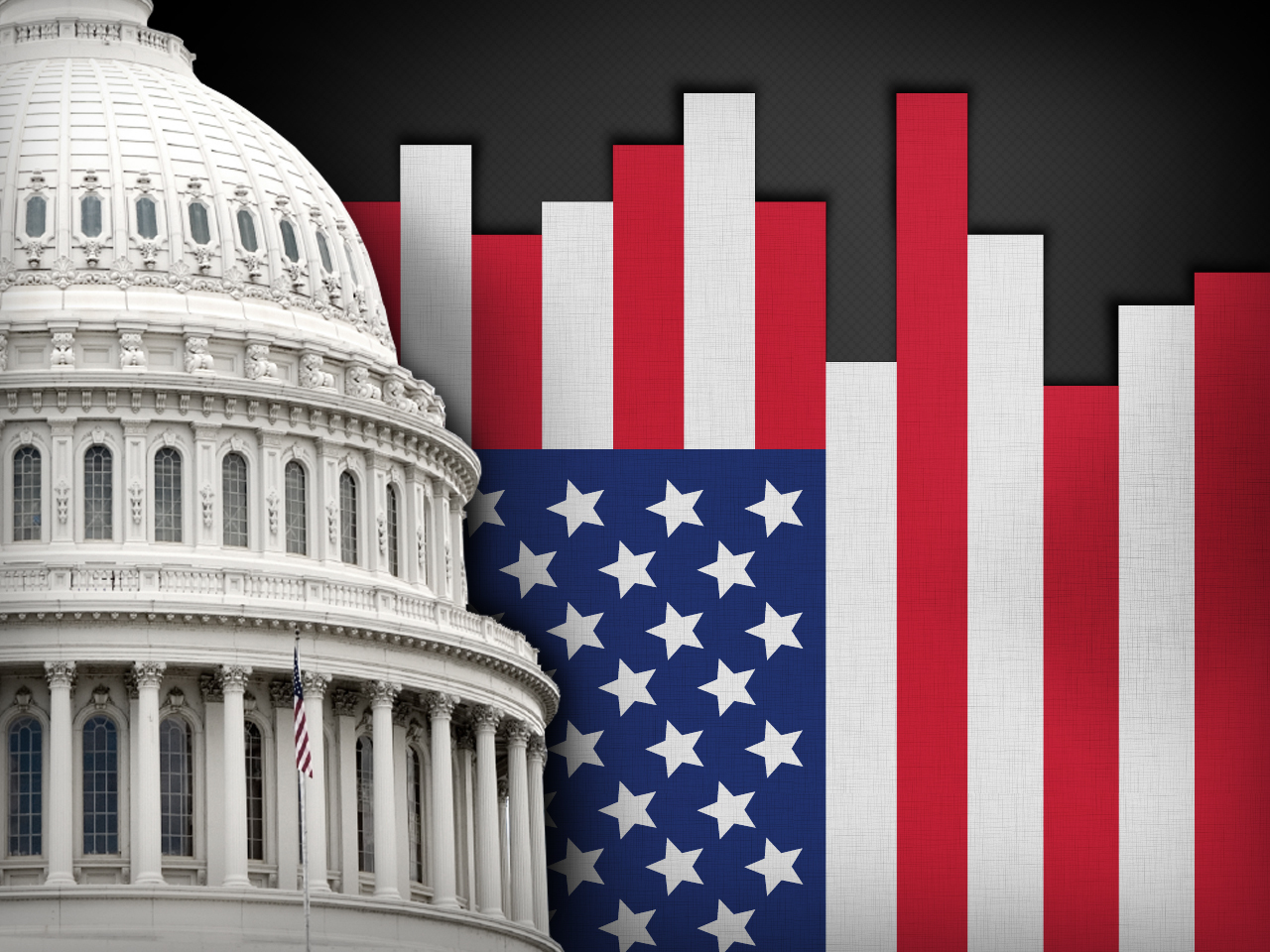 The recent government shutdown and the debate over raising the debt ceiling have taken their toll on Americans' perceptions of the legislative branch overall. In this poll conducted after the 16-day government shutdown ended, 85 percent of Americans disapprove of the way Congress does its job - the highest percentage ever recorded since CBS began asking the question in 1977. Just 9 percent approve, matching the all-time low recorded two years ago.

faced with deadlines early next year . Concern is widespread, and even a majority (58 percent) of those who approve of the current agreement are very concerned about what will happen next year.

More broadly, the recent budget negotiations have made 64 percent of Americans pessimistic about Congress' ability to deal with future issues affecting the country; only 11 percent are optimistic.

Government, Direction of the Country

The poll finds disaffection with government generally too. Seventy-six percent don't think they have much say in what the government does - the highest number since 1990 when CBS News began asking this question.

Majorities of Republicans (87 percent), Democrats (68 percent) and independents (77 percent) all feel they don't have much say in what the government does. More than three in four tea party supporters agree.

Most Americans continue to view the condition of the national economy negatively. Two thirds think it is in bad shape; just 32 percent think it is good.

The economy and jobs remain the top concern for Americans (26 percent), but more are now concerned about the budget deficit and partisan politics then last month (12 percent now, 6 percent last month).

The American public is divided on the

agreement reached last week  to raise the debt ceiling and fund the government until early next year. Most Republicans (60 percent) and tea party supporters (62 percent) disapprove of the deal, while most Democrats (64 percent)approve. Among independents, half disapprove.

Blame continues to break down along party lines. Most Republicans (71 percent) blame Barack Obama and congressional Democrats, while Democrats blame the Republicans in Congress in even higher numbers (85 percent). Independents are divided.

While majorities of Americans think both sides were more concerned with political advantage than what was best for the country, more view the Republicans that way.

Views of the President, Congressional Leaders

Most Americans continue to disapprove of how Mr. Obama is handling the economy, the top issue among Americans overall. While 42 percent approve, 52 percent disapprove - similar to last month.

Americans are divided as to whether or not Mr. Obama showed strong qualities of leadership during the recent negotiations over the debt ceiling and government shutdown: 46 percent think he did, while more - 50 percent - think he did not.

Both the leaders of the House of Representatives and the Senate receive low job ratings, but more Americans disapprove of the job Republican Speaker of the House John Boehner is doing (65 percent) than Democratic Senate Majority Leader Harry Reid (55 percent). Both leaders have net disapproval ratings even among members of their own party.

Most Americans say the shutdown will matter when they evaluate their own member of Congress: 75 percent say their member's vote and shutdown position will have a lot or some impact, including 41 percent who say it will matter a lot.

Tea party adherents were front-and-center during the shutdown, and views of the movement have become more negative. Just 14 percent of Americans now hold a favorable view of the tea party, down from 18 percent just as the government shutdown began, and unfavorable views are up seven points. Half of Americans still hold no view of the tea party or are unfamiliar with it, even after these high-profile political battles.

Views of how things are going in Washington are similar to what they were at the beginning of the government shutdown. Eighty-six percent are either dissatisfied or angry, including 39 percent who are angry.

With more budget negotiations on the horizon, Americans were asked to choose which of the largest items in the federal budget they would be most willing to change in order to cut spending. More choose military spending (41 percent), over Medicare (23 percent) or Social Security (16 percent).

Cutting military spending is the top choice of Democrats (51 percent) and independents (41 percent), while Republicans are more inclined to choose Medicare (30 percent).

well-publicized problems since its launch earlier this month. Many Americans seem to be aware of those issues: only 12 percent think the sign up process is going well, while far more - 49 percent -- say it is not going well.

However, more than a third of Americans can't evaluate how signup is going.

Views continue to be highly partisan: 74 percent of Democrats approve of it, compared to 87 percent of Republicans who disapprove. Fift-five percent of independents disapprove.

Throughout CBS News' polling on the subject, Americans have consistently expected that the new health care law will lead to increased costs. Also, 40 percent think the quality of their own health care will get worse. Views have changed little since the law was enacted in March 2010.

Those who disapprove of the law are especially likely to say they expect their costs to rise and the quality of their care to worsen.

There is widespread support for providing a path to citizenship for illegal immigrants in the U.S. if they meet certain requirements, including a waiting period, paying fines and back taxes, passing criminal background checks and learning English. Seventy-seven percent favor that; just 20 percent oppose. Support cuts across partisan lines.

Still, more Americans (50 percent) think securing the nation's border should be a higher priority than addressing the status of illegal immigrants (43 percent). Republicans are more likely than Democrats and independents to place a priority on border security.

This poll was conducted by telephone October 18-21, 2013 among 1,007 adults nationwide. Data collection was conducted on behalf of CBS News by Social Science Research Solutions of Media, Pa. Phone numbers were dialed from samples of both standard land-line and cell phones. The error due to sampling for results based on the entire sample could be plus or minus three percentage points. The error for subgroups may be higher. Interviews were conducted in English and Spanish. This poll release conforms to the Standards of Disclosure of the National Council on Public Polls.