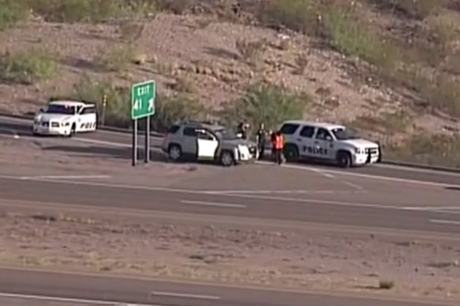 The incident occurred around 4 p.m. Friday afternoon, when a Hatch police officer pulled over a car. The Doña Ana County Sheriff's Department said that's when a passenger got out of the car and fired at the officer. Witnesses said they heard approximately six shots.

A Doña Ana County Sheriff's Deputy confirmed to KRQE that the officer involved in that incident during the traffic stop died. Authorities identified him as 33-year-old Jose Chavez.

A different officer, who was also responding to the traffic stop, watched as the suspects took off, KRQE reported.

The suspects led that second officer on a nearly 100-mph speed chase. At some point, the officer lost the suspects and the car exited I-25 at Radium Springs.

According to the sheriff's department, the suspects then carjacked a red vehicle, shooting the driver. The condition of the driver is currently unknown.

Deputies spotted the stolen vehicle nearby. Stop sticks were put out, flattening the tires and the SUV crashed.

"He surrendered to our deputies. At that point, the deputies noticed that the driver of the vehicle, who was the suspect again, was suffering from a gunshot wound to the thigh," said Kelly Jameson with DASO.

Two other suspects were arrested nearby after running off, KRQE reported. They are being questioned by the sheriff's department. The suspects have not yet been identified.