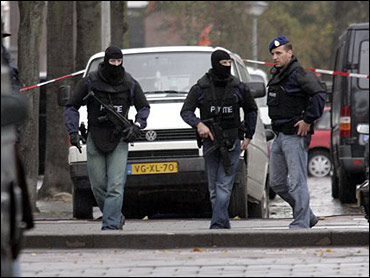 Police raided a house in The Hague on Wednesday, ending a 15-hour standoff in which one suspect and three officers were wounded, authorities said. Two suspected terrorists were arrested in the raid and a third was detained in another city.

The standoff began when special forces tried to storm the house but aborted the effort after suspects threw a hand grenade, injuring the three officers, Police Chief Gerard Bouwman said. It ended with a second raid shortly before dark.

Police sealed off the area while they searched the building for explosives.

Bouwman said two suspects were arrested in the standoff. A third was detained in the city of Utrecht in a related investigation, according to the national prosecutor's office.

Hague Chief Prosecutor Han Moraal earlier said the raids were part of a "continuing investigation into terrorism," but he would not confirm if the case was related to the Nov. 2 killing of filmmaker Theo van Gogh by an alleged Islamic radical.

Eight suspected Islamic extremists had been arrested prior to the raid in connection with the slaying of Van Gogh, who earlier this year released a film critical of how women are treated under Islam. Among those arrested was a 26-year-old accused of killing the filmmaker, identified as Mohammed Bouyeri.

Of the three officers wounded during the standoff, one had serious injuries to his stomach and legs from the grenade, Bouwman said.

During the siege, several city blocks were cordoned off in a mostly immigrant neighborhood in The Hague's and residents were taken by bus to a school.

Police snipers were stationed nearby rooftops as helicopters hovered overhead and at least a dozen SWAT teams stood ready on standby.

Eight to 10 gunshots rang out at one point before the second raid.

Witness Irma Heijmans said on national television she saw two young men — one who appeared to be wounded — escorted from the building by police.

Sylvia Cordia, 42, who lives across the street from the house, said she saw several explosions in the early morning attack. "I saw one policeman crumble to the ground and another was dragged away to safety."

"There were several people in the house, and I heard a man yelling, 'I'll chop your head off' and yelling profanities," she said.

Tensions have been high in the Netherlands since Van Gogh's murder in Amsterdam eight days ago, with more than a dozen arson attacks against churches and mosques. An Islamic school in Eindhoven was bombed Monday night, and another in Uden was burned down Tuesday. No injuries were reported.

Van Gogh had received death threats after the release of his most recent movie about the treatment of women under Islam.

"Extremism is reaching the roots of our democracy," he said. "We cannot let ourselves be blinded by people who seek to drag us into a spiral of violence.

Balkenende condemned the cycle of reprisals. "We have to utterly reject this violence, altogether, because we're being un-Dutch," he said.