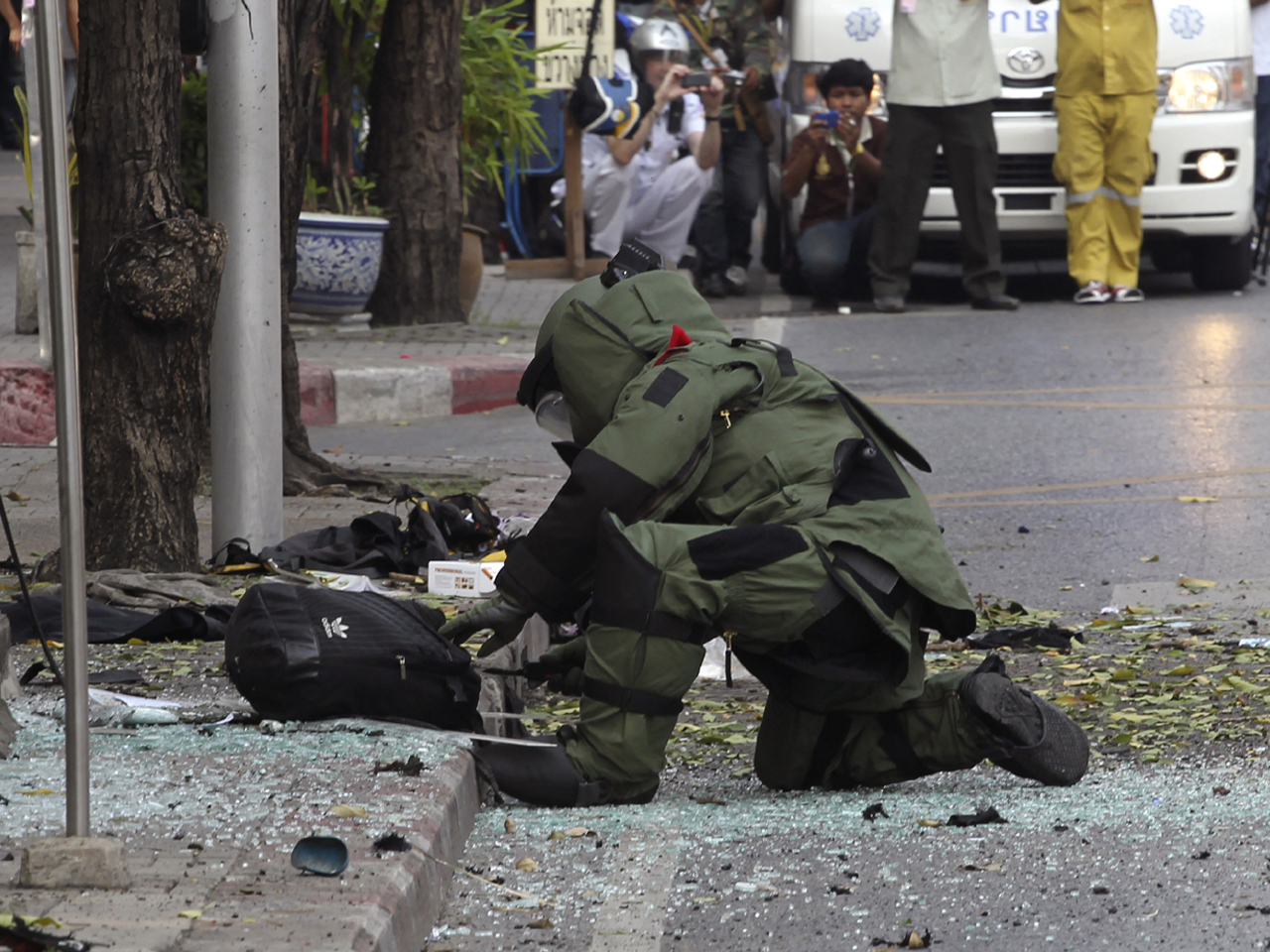 BANGKOK - A wounded Iranian fleeing an unintended explosion at a house threw a grenade at Bangkok police that instead blew off one of his legs in a series of blasts Tuesday that Israel's defense minister called an "attempted terrorist attack" by Iran. The violence came a day after Israel blamed Tehran for targeting its diplomats with bombs in India and Georgia.

Four other people were injured in the Bangkok explosions, which tore the roof off a house where the wounded man lived with two other compatriots. A second Iranian was arrested at Bangkok's international airport as he was trying to leave Thailand for Malaysia and a third was being sought, police said.

Israel's Channel 10 TV quoted unidentified Thai authorities as saying the captured Iranians confessed to targeting Israeli interests. The site of the blast is just a few miles from the Israeli Embassy.

Thai government spokeswoman Thitima Chaisaeng said "we need more analysis" to determine who was behind the attack and whether Iran was involved. She refused to comment on what the Iranians might have been planning or whether targets had been identified.

The explosions in the normally peaceful Thai capital came as tensions are running high between the two Middle Eastern nations because of Israel's threats of military strikes on Iran's nuclear facilities and the recent killings of Iranian atomic scientists. Iran has blamed Israel for the assassinations, and there have been signs that Tehran might try to retaliate.

"The attempted terrorist attack in Bangkok proves once again that Iran and its proxies continue to perpetrate terror," Defense Minister Ehud Barak said in Singapore. "The recent terror attacks are yet another example of this."

Added Israeli Public Security Minister Yitzhak Aharonovitch, in an interview with Israel Radio: "We know who carried out the terror attacks, we know who sent them, and Israel will settle the score with them."

There was no comment from Iranian officials in Tehran on Tuesday's blasts in Thailand.

In Washington, State Department spokeswoman Victoria Nuland didn't blame Iran directly, but she noted Monday's incidents in India and Georgia, and recent "Iranian-sponsored" and "Hezbollah-linked" plots to attack Israeli and Western interests in Azerbaijan and Thailand.

Will Hartley, head of the Terrorism & Insurgency Center at IHS Jane's in London, said the attacks in India, Georgia and Thailand "have all been highly amateurish, and lack the sophistication that would normally be expected from an operation executed by either Hezbollah or Iran's own external operations wing, the Quds Force."

The sequence of Tuesday's blasts in Bangkok began when a stash of explosives apparently detonated by accident in the house occupied by the three Iranians, blowing off part of its roof.

Surveillance video from after that blast showed separate images of each of the suspects walking down the middle of a residential street. One man wearing a baseball cap and a dark jacket carried a large backpack over one shoulder and what appeared to be two portable transistor radios — one in each hand.

A second suspect wearing sunglasses, a T-shirt, pants and tennis shoes also carried a backpack. The third, dressed in camouflage shorts, carried nothing.

A man identified as Saeid Moradi was wounded in the initial explosion and left the house, Pansiri said.

"He tried to wave down a taxi, but he was covered in blood, and the driver refused to take him," Pansiri said. Moradi then threw an explosive that damaged the taxi.

Police who had been called to the scene tried to apprehend Moradi, who hurled a grenade at them, "but somehow it bounced back" and blew off his leg, Pansiri said.

Photos of the wounded Moradi showed him covered in soot, lying on a sidewalk strewn with broken glass in front of a primary and secondary school. Hospital officials said Moradi's right leg was severed below the knee, while his left leg was severely injured.

The Iranian arrested at the airport was identified as Mohummad Hazaei and had been in the house at the time the explosives went off, police said.

A third Iranian — believed wounded in the first explosion — was at large, they said.

Prime Minister Yingluck Shinawatra called on people "not to panic" and said the situation was under control.

Three Thai men and one Thai woman wounded in the explosions were taken to Kluaynamthai Hospital, said Dr. Suwinai Busarakamwong.

Last month, a Lebanese-Swedish man with alleged links to pro-Iranian Hezbollah militants was detained by Thai police. He led authorities to a warehouse filled with more than 8,800 pounds of urea fertilizer and several gallons of liquid ammonium nitrate.

Israel and the United States at the time warned their citizens to be alert in the capital, but Thai authorities said Thailand appeared to have been a staging ground but not the target of any attack.

Pansiri said that "so far, we haven't found any links between these two cases."

Authorities are trying to trace Moradi's movements, but initial reports indicated he arrived in Thailand from Seoul, South Korea, on Feb. 8, Pansiri said. He landed at the southern resort of Phuket, then stayed for several nights in a hotel in Chonburi, a couple hours drive southeast of Bangkok, for several nights.

A bomb disposal unit checked a dark backpack near the spot where Moradi was wounded and police found Iranian currency, U.S. dollars and Thai money in the bag, Pansiri said.

Thailand has rarely been a target for foreign terrorists, although a domestic Muslim insurgency in the country's south has involved bombings of civilian targets.

In New Delhi, Indian investigators sought the motorcycle assailant who attached the bomb to the Israeli diplomatic car that injured four, including a diplomat's wife, who was in critical, but stable, condition.

Indian Home Minister Palaniappan Chidambaram said it appeared to be a terror attack carried out by a "very well-trained person." Authorities were scanning closed-circuit camera video of the street, Chidambaram said.

Israeli media also reported that Mossad teams are in Bangkok and New Delhi to investigate the explosions.