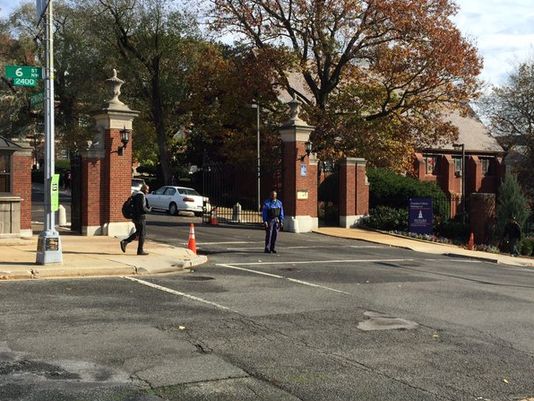 WASHINGTON D.C. -- A federal law enforcement source confirms that investigators are "assessing the credibility" of an apparent death threat against students at one of the nation's oldest historically black colleges, CBS News justice and homeland security correspondent Jeff Pegues reports.

Sources tell CBS News the racist rant and threat against students at Howard University in Washington D.C., first appeared in lesser-known social media forums and then spread on Twitter. The FBI is aware of the threat and investigating along with D.C.'s Metropolitan Police.

On Thursday evening, University President Wayne A.I. Frederick sent a statement to the Howard community, saying that the threat towards the University had not been followed by any additional threats or suspicious activity.

"The investigation is now being led by the Federal Bureau of Investigation (FBI)," Frederick wrote. "The Howard University Department of Public Safety is working closely with the FBI, the Metropolitan Police Department (MPD) and the Metro Transit Police Department as the investigation continues," the statement read. "We will provide updates, with additional information, as facts are confirmed. In the meantime, increased security will continue to be provided on campus and at area Metro locations."

Earlier in the day the FBI released a statement.

"We are aware of the online threat and have made appropriate notifications. We urge anyone who has information about the threat to contact the Metropolitan Police Department or the FBI," the statement read.

Sources tell CBS News the motive behind the apparent threat is unclear. Investigators are asking anyone with information to contact the FBI or police in Washington D.C.

It comes at a time of increased tensions on university campuses across the country after protests led to the resignations of both the president and chancellor of the University of Missouri. The university system's president and the Columbia campus chancellor after racial unrest that included protests, a hunger strike and the football team's threatened boycott of its next game. Activists felt administrators had not done enough to address racial concerns.

Campus police arrested Hunter M. Park, 19, in Rolla at 1:50 a.m. and took him to jail in Columbia, about 75 miles to the northwest.

Police said earlier the suspect was not on or near the university's Columbia campus when the threat was made. Officials later said Park is a student at one of the school system's other campuses.

Missouri University of Science and Technology in Rolla confirmed that 19-year-old Hunter M. Park is a student there. He was arrested Wednesday at a residence hall on the Rolla campus. The school says no weapons were found. Park was taken by University of Missouri police to Columbia, where he is jailed.

"We had additional officers on patrol last night and the campus remained safe," Major Brian Weimer said in a statement. "We investigated a number of reports and tips and take every one of them seriously."

In addition, a 19-year-old Northwest Missouri State University student from Blue Springs has been charged with two counts of making a terrorist threat.

Nodaway County Prosecutor Robert Rice on Thursday filed one misdemeanor and one felony count against Connor Stottlemyre, a freshman at the school in Maryville.

Stottlemyre is accused of posting a threat on the Yik Yak social media app that read, "I'm gonna shoot any black people tomorrow, so be ready."

He was arrested Wednesday in his dormitory. University spokesman Mark Hornickel said Thursday it wasn't immediately clear whether Stottlemyre would face any school disciplinary action.

Nineteen-year-old Tyler Bradenberg, of St. Louis, was charged Thursday with a felony count of making a terrorist threat. An arrest warrant has been issued for him.

Authorities say Brandenberg posted "I'm gonna shoot up this school" on the anonymous messaging app Yik Yak on Wednesday. It was apparently aimed at the Missouri University of Science & Technology in Rolla, where he studied chemical engineering for a semester last fall.

A Rolla detective says Brandenberg admitted he posted the threat. An S&T spokeswoman says technology was used to try to make it appear the post was made from the Rolla campus, but it wasn't.