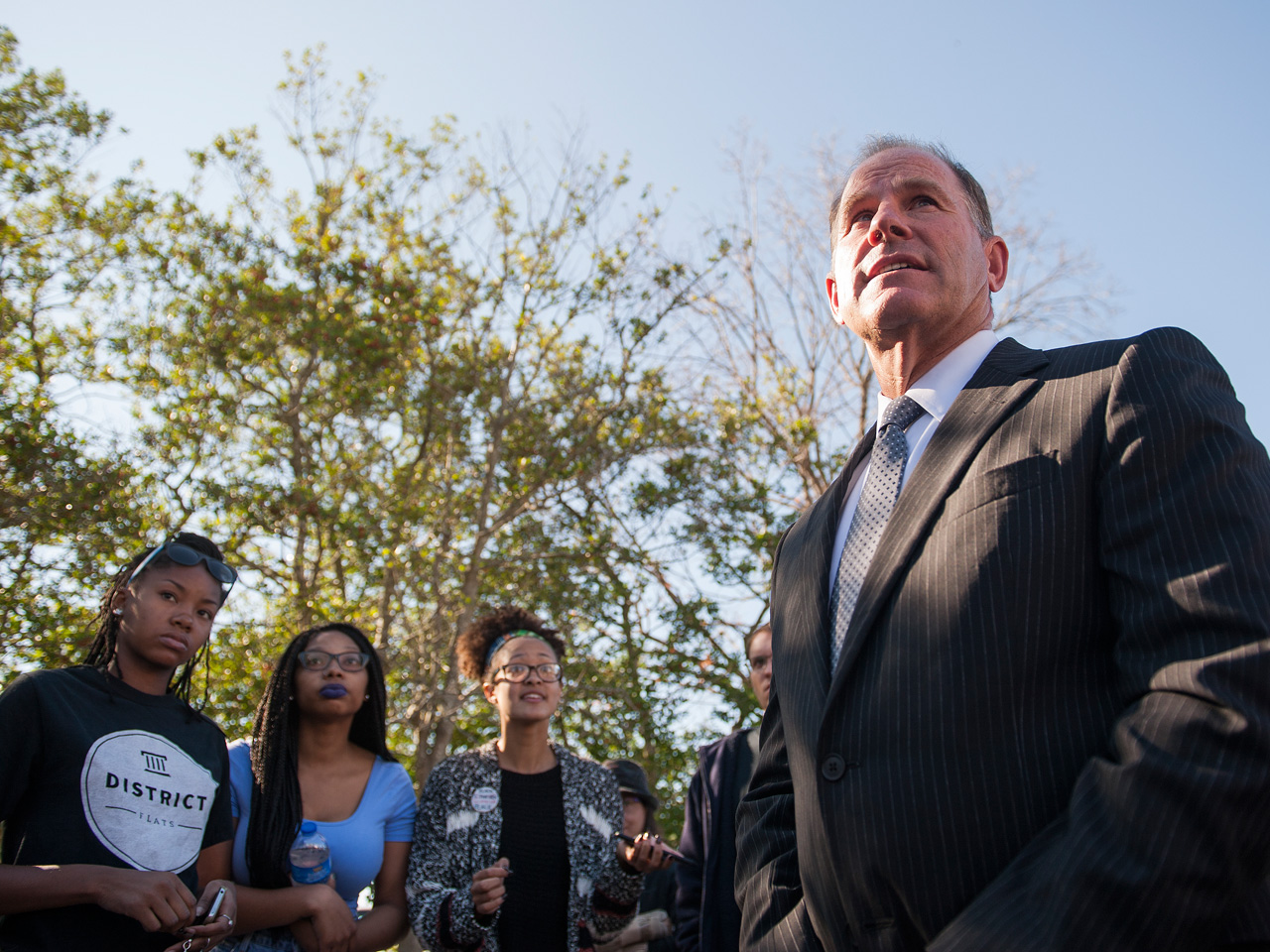 COLUMBIA, Mo. - The president of the University of Missouri system and the head of its flagship campus resigned Monday with the football team and others on campus in open revolt over what they saw as indifference to racial tensions at the school.

President Tim Wolfe, a former business executive with no previous experience in academic leadership, took "full responsibility for the frustration" students expressed and said their complaints were "clear" and "real."

For months, black student groups had complained that Wolfe was unresponsive to racial slurs and other slights on the overwhelmingly white main campus of the state's four-college system. The complaints came to a head two days ago, when at least 30 black football players announced that they would not play until the president left. A graduate student went on a weeklong hunger strike.

Wolfe's announcement came at the start of what had been expected to be a lengthy closed-door meeting of the school's governing board.

"This is not the way change comes about," he said, alluding to recent protests, in a halting statement that was simultaneously apologetic, clumsy and defiant. "We stopped listening to each other."

He urged students, faculty and staff to use the resignation "to heal and start talking again to make the changes necessary."

Hours later, the top administrator of the Columbia campus, Chancellor R. Bowen Loftin, announced that he would step down at the end of the year and shift to leading research efforts.

The school's undergraduate population is 79 percent white and 8 percent black. The state is about 83 percent white and nearly 12 percent black. The Columbia campus is about 120 miles west of Ferguson, Missouri, where Michael Brown was killed last year in a fatal shooting that helped spawn the national "Black Lives Matter" movement rebuking police treatment of minorities.

In response to the race complaints, Wolfe had taken little public action and made few statements. As students leveled more grievances this fall, he was increasingly seen as aloof, out of touch and insensitive to their concerns. He soon became the protesters' main target.

In a statement issued Sunday, Wolfe acknowledged that "change is needed" and said the university was working to draw up a plan by April to promote diversity and tolerance. But by the end of that day, a campus sit-in had grown in size, graduate student groups planned walkouts and politicians began to weigh in.

After the resignation announcement, students and teachers in Columbia hugged and chanted.

Sophomore Katelyn Brown said she wasn't necessarily aware of chronic racism at the school, but she applauded the efforts of black student groups.

"I personally don't see it a lot, but I'm a middle-class white girl," she said. "I stand with the people experiencing this." She credited social media with propelling the protests, saying it offered "a platform to unite."

At a news conference Monday, head football coach Gary Pinkel said his players were concerned with the health of Jonathan Butler, who had not eaten for a week as part of protests against Wolfe. The coach said that's why supported the athletes' decision to boycott team activities until the president resigned.

After Wolfe's announcement, Butler ended his strike. He appeared weak and unsteady as two people helped him into a sea of celebrants on campus. Many broke into dance at seeing him.

Asked how he felt about Wolfe stepping down, Butler said he's "empowered, and ready to eat."

Football practice was to resume Tuesday ahead of Saturday's game against Brigham Young University at Arrowhead Stadium, the home of the NFL's Kansas City Chiefs. Canceling the game could have cost the school more than $1 million.

Shaun Harper, executive director for the Study of Race and Equity in Education at the University of Pennsylvania, said the black football players "understood that they have the power."

"That is so rare," said Harper, who authored a 2013 study on black male student-athletes and racial inequities in NCAA Division I sports. "Not in our modern history have we seen black students collectively flex their muscle in this way."

The protests began after the student government president, who is black, said in September that people in a passing pickup truck shouted racial slurs at him. In early October, members of a black student organization said slurs were hurled at them by an apparently drunken white student.

Frustrations flared again during a homecoming parade, when black protesters blocked Wolfe's car, and he did not get out and talk to them. They were removed by police.

Also, a swastika drawn in feces was found recently in a dormitory bathroom.

The university did take some steps to ease tensions. At Loftin's request, the school announced plans to offer diversity training to all new students starting in January, as well as faculty and staff. On Friday, the chancellor issued an open letter decrying racism after the swastika was found.

Many of the protests have been led by an organization called Concerned Student 1950, which gets its name from the year the university accepted its first black student. Group members besieged Wolfe's car at the parade, and they conducted a weeklong sit-in on a campus plaza.

The group demanded that Wolfe resign and "acknowledge his white male privilege." It also sought a 10-year plan to retain more marginalized students and the hiring of more minorities at the university's counseling center.

Also joining in the protest effort were two graduate student groups and the student government at the Columbia campus, the Missouri Students Association.

On Sunday, the association said in a letter to the system's governing body that there had been "an increase in tension and inequality with no systemic support" since Brown's death.

Brown, an unarmed black 18-year-old, was shot and killed by a white police officer during a struggle. The Justice Department later cleared officer Darren Wilson, concluding evidence backed his claim that he shot Brown in self-defense after Brown tried to grab the officer's gun.

Wolfe, 57, is a former software executive and Missouri business school graduate whose father taught at the university. He was hired as president in 2011, succeeding another former executive with no experience in academia.

The governing board said an interim system president would be named soon.