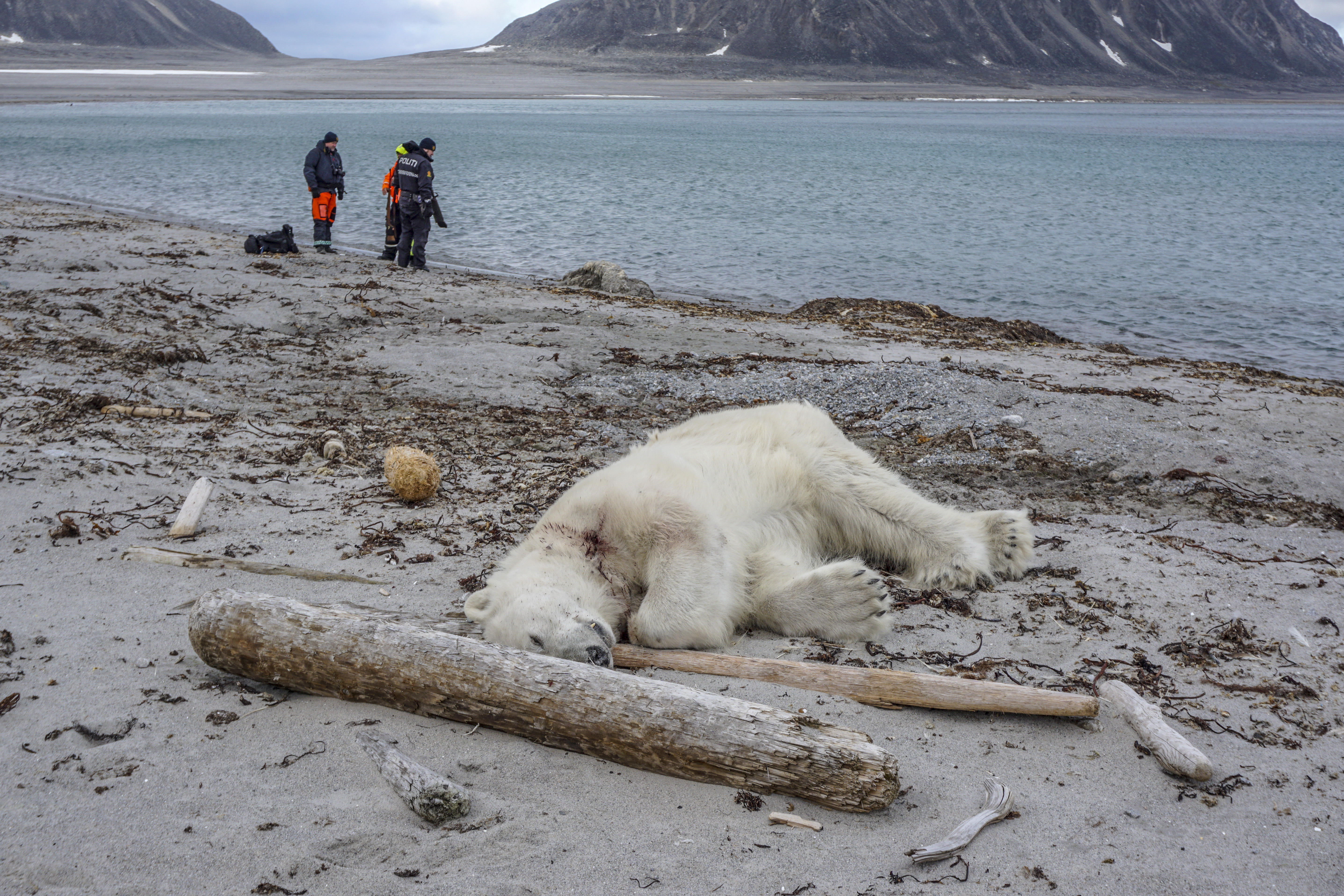 COPENHAGEN, Denmark -- Norwegian authorities on Monday defended the actions of guards from a German cruise ship that killed a polar bear that had attacked and injured a crew member, saying they at first tried to scare it away. Police spokesman Ole Jakob Malmo said two members of the 12-man crew that set foot on the most northern island of the Svalbard archipelago ahead of tourists on Saturday first tried to ward off the bear "by shouting and making loud noises as well as firing a signal pistol, but to no effect."

A 42-year-old German man who was not identified sustained minor head injuries from the attack, Malmo said.

The incident sparked international outrage, with animal rights activists saying that it was wrong to begin with to let tourists from the MS Bremen cruise ship encroach upon territory known as a habitat for the vulnerable species.

The German cruise ship operator Hapag Lloyd Cruises said on its Facebook page that the purpose of the landing on Svalbard was not "to serve the purpose of polar bear observation, on the contrary: polar bears are only observed from aboard ships, from a safe distance."

British comedian Ricky Gervais took to Twitter to call the tourists "morons," while another user, Jane Roberts, said that if such tourism was banned, guards "wouldn't be needed to protect gawking tourists & polar bears would be left in peace & not shot dead merely to satisfy a photo op."

The archipelago between mainland Norway and the North Pole is known for its stunning snow-covered mountains, fjords and glaciers, and is a popular cruise ship destination. An estimated 60 percent of the archipelago is covered with ice, and its 3,000 polar bears are said to outnumber the human population, BBC News reports.

On its Web site, the office for the archipelago' governor says bears may appear anywhere on Svalbard and urges people "to stay as far away as possible to avoid situations that could be dangerous for you and for the bear" if one encounters one of the estimated 20,000- 25,000 bears that live in the Arctic.

Svalbard is dotted with warnings about polar bears. Visitors who choose to sleep outdoors receive stern warnings from authorities that people must carry firearms while moving outside of settlements.

In 2015, a polar bear dragged a Czech tourist out of his tent as he and others were camping north of Longyearbyen - Svalbard's the main settlement - clawing his back before being driven away by gunshots. Jakub Moravec who was slightly injured, was among a group of six on a combined ski and snow scooter trip on the remote islands. The bear was eventually found and killed by local authorities.

The animal killed Saturday was transported to Longyearbyen to be routinely examined, Malmo said.

Earlier this month, a polar bear reportedly killed a 31-year-old father who was protecting his children in Canada's northernmost territory of Nunavut.