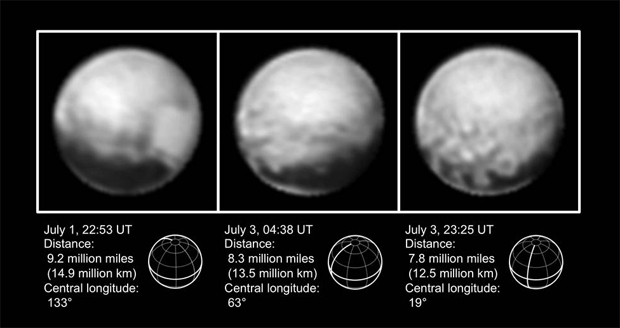 After a computer glitch Saturday that briefly knocked NASA's Pluto-bound New Horizons probe offline, the spacecraft is out of "safe mode" and ready to resume normal science operations Tuesday, just one week before the spacecraft's historic flyby of the dwarf planet and its large moon Charon, mission managers said Monday.

The glitch was caused when one of the two redundant flight computers aboard New Horizons was attempting to compress previously captured science data on a solid-state recorder while at the same time writing the detailed command sequence governing flyby operations to flash memory.

"The computer was trying to do these two things at the same time, and the two were more than the processor could handle," said Glen Fountain, the New Horizons project manager at the Johns Hopkins University Applied Physics Laboratory.

"So the processor said 'I'm overloaded.' Then the spacecraft did exactly what it was supposed to do. It then switched to the backup computer and ... it went safe. At that point, we lost the downlink from the primary (computer)."

But as programmed, the backup computer sent telemetry to Earth and engineers quickly realized what had happened. The data compression was completed and the command sequence, the complex set of instructions that will control all spacecraft activity between Tuesday and July 16, two days after the Pluto flyby, was successfully written to the primary computer's flash memory.

The same command sequence already was loaded on the backup computer.

Fountain said the computer overload will not happen again because the command sequence is now safely written to both computers' memory and no similar simultaneous operations will be needed in the future.

After the flyby sequence begins executing Tuesday, at 12:24 p.m. EDT (GMT-4), the spacecraft will obey "encounter mode" programming and quickly switch computers to continue science operations in the event of a malfunction that earlier would have prompted a protective shutdown and a call back to Earth for help.

With a once-in-a-lifetime approach and flyby proceeding at more than 31,000 miles per hour some three billion miles from the Earth -- so far it takes radio signals four hours and 25 minutes to reach the spacecraft -- New Horizons will not have time to await instructions from Earth.

"We are so far away, it's a nine-hour round-trip light time, so the spacecraft has to operate on its own," Fountain said. "We can't rely upon the kind of ground intervention, as good as it is, to be able to do anything. So we have an encounter mode. Instead of going safe as it did (Saturday) the spacecraft will automatically return to the preprogrammed timeline to continue gathering data. We will have that as our belt and suspenders as we go through the encounter itself."

The New Horizons team "worked overnight Saturday, they worked all day Sunday and not only produced a very rapid and flawless recovery from safe hold, but put us back on the main computer and have now uploaded the command load for flyby so the spacecraft is ready now to execute the nine days of flyby operations," he said.

Stern's team released dramatic new images of Pluto on Monday that were taken between July 1 and 3 by the spacecraft's Long-Range Reconnaissance Imager, or LORRI, camera and a color image acquired by a camera known as Ralph. The images were taken when New Horizons was between 7.8 million miles and 9.2 million miles away.

The images show dark terrain around the dwarf planet's equator and large bright areas that will be on the sunlit side of Pluto when New Horizons flies past on July 14. Four Missouri-size dark spots in the opposite hemisphere that were first observed last week now show up in more detail although it's not yet clear what they might be.

Science observations were suspended when New Horizons went into safe mode Saturday and even though engineers restored normal operations Sunday, no additional data will be collected until the flyby sequence begins executing Tuesday.

Stern said the spacecraft missed about 30 planned observations, or about 6 percent of the 496 observations planned through July 16, including 16 LORRI images four color pictures from Ralph, one spectroscopic observation and four atmospheric measurements.

"But scientifically, we weigh the observations by how close we are to the planet," he said. "So our assessment is the weighted loss is far less than 1 percent. There's zero impact to the group-one highest-priority science.

"While we prefer this event hadn't occurred, I can tell you this is a speed bump in terms of the total return we expect from this flyby. We are very much looking forward now to getting back, beginning tomorrow, with the data collection. Both Pluto and Charon are already surprising us with their surface appearance, and we're excited to get back to that."