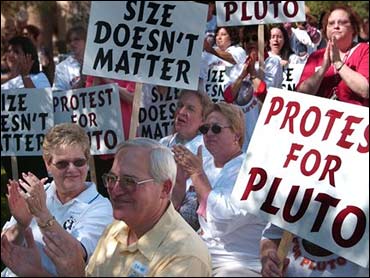 Over 300 astronomers so far have signed a petition protesting the recently adopted new definition for planets – which excludes Pluto.

The astronomers do not necessarily oppose taking Pluto's planet status away, but they believe the new definition is flawed and will confuse the public.

The International Astronomy Union voted last month to adopt a new definition that says a planet is an object that orbits the sun, is large enough for its own gravity to pull it into a round shape and has cleared the neighborhood around its orbit.

This knocked Pluto out of the planet family because the body is located in the Kuiper Belt, a ring of debris with millions of cometlike remnants from the solar system's formation.

Dave Tholen, UH planetary scientist, said the new definition's rules would be too difficult to apply to a newly discovered object.

"It requires too much information," Tholen said. "I felt we needed something simpler."

Tholen, who is internationally known for his work on asteroids, voted against the new definition during last month's meeting in Prague, Czech Republic. He also signed the petition.

Mark Sykes, director of the Planetary Science Institute in Tucson, Ariz., spearheaded the petition with Alan Stern of the Space Science and Engineering Division of the Southwest Research Institute. Stern is principal investigator for the New Horizons spacecraft en route to what was the ninth planet, Pluto.

The petition says: "We, as planetary scientists and astronomers, do not agree with the IAU's definition of a planet, nor will we use it. A better definition is needed."

The petition's sponsors said in a news release that the definition would confuse educators and the public so long as it remained in place.

They plan to establish an open process allowing astronomers and planetary scientists to reach a consensus on "the issue of planets in our own solar system and elsewhere."

A definition change can't be made until the IAU's next General Assembly in three years, Tholen said.

About 3,000 astronomers attended the IAU meetings in Prague, but only the roughly 500 scientists at the general assembly were eligible to vote, Tholen said.

"This is about as big a brouhaha in the astronomical world as I can recall," he said. "It's one of the most passionate discussions I've witnessed."

Pluto was discovered by the late Clyde Tombaugh of Las Cruces, N.M., who was 24 when he discovered Pluto while working at Lowell Observatory in Flagstaff, Ariz. Tombaugh came to New Mexico State University in 1955 and founded the school's research astronomy department.

Last week, NMSU students as well as Tombaugh's friends and colleagues gathered on NMSU's campus to protest the decision to downgrade Pluto. About 50 students and staff members turned out for the good-natured challenge. Some wore T-shirts and carried signs that read "Protest for Pluto" and "Size Doesn't Matter."