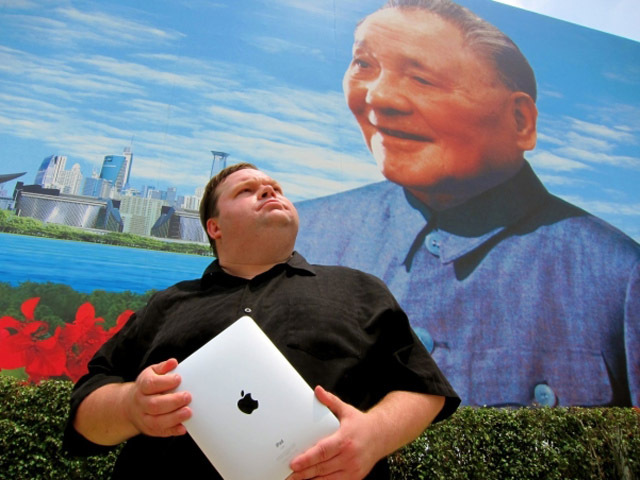 (CBS/AP) Playwright Mike Daisey received a standing ovation at the  final New York performance of his "The Agony and the Ecstasy of Steve Jobs" on Sunday night.

For the last production, Daisey, the off-Broadway performer who admitted that he made up parts of his one-man show about Apple products being made in Chinese sweatshops, cut questionable sections from the monologue and added a prologue explaining the controversy. Prior to the show, he told the audience he altered the script to make it more accurate.

Oskar Eustis, artistic director of The Public Theater, where the monologue was performed, said Saturday that Daisey had "eliminated anything he doesn't feel he can stand behind" from the show and added a section at the beginning in which he addresses the questions raised by critics.

Daisey portrayed the work as fact during a media blitz to promote his critically acclaimed show, and he misled dozens of news and entertainment outlets, including the popular public radio show "This American Life," The Associated Press, The New York Times, MSNBC and HBO's "Real Time with Bill Maher."

But in an interview with "This American Life"  that host Ira Glass broadcast Friday, Daisey acknowledged that some of the claims in his production weren't true. The show retracted its Jan. 6 episode because Glass said he couldn't vouch for the truth of its claims.

Daisey posted a note on his website Friday, noting that his work is a mix of fact and fiction.

"What I do is not journalism," he explained. "The tools of the theater are not the same as the tools of journalism. For this reason, I regret that I allowed THIS AMERICAN LIFE to air an excerpt from my monologue. THIS AMERICAN LIFE is essentially a journalistic, not a theatrical, enterprise, and as such it operates under a different set of rules and expectations. But this is my only regret."

The controversy put The Public, where the work ended its second run on Sunday, in a difficult spot - protective of artists and their right to free expression but also sensitive to audience concerns.

"We do not and cannot fact check our artists; we're a theater, not a news organization. The vast majority of what occurs on our stages is fiction. If we didn't believe fiction could reveal truth, we would have to give up our profession. With that said, it obviously matters a great deal to me that our audience understands what they are seeing," Eustis said.

Daisey told Glass he felt conflicted about presenting things that he knew weren't true. But he said he felt "trapped" and was afraid people would no longer care about the abuses at the factories if he didn't present things in a dramatic way.

Before he scrubbed the monologue, Daisey described traveling to the Chinese industrial zone of Shenzhen and interviewing hundreds of workers from Foxconn Technology Group, the world's largest electronics contract manufacturer. Daisey said he stood outside the gate with a translator and met workers as young as 12 and some whose joints were damaged because they performed the same action thousands of times a shift.

But "This American Life" reported Daisey's Chinese interpreter disputed many of the artist's claims when contacted by Rob Schmitz, a China correspondent for the public radio show "Marketplace." Among them, the translator said guards outside the factory weren't armed, Daisey never met workers from a secret union and he never visited factory dorm rooms.

Daisey told Glass he didn't meet any poisoned workers and guessed at the ages of some he met. He also said some details he used were things he read about happening elsewhere.

Daisey - a performer in the vein of Spalding Gray and John Leguizamo - has performed the monologue for more than 50,000 people. He plans to take the show on tour, next stopping in Washington, DC.

Tell us: What do you think about the firestorm surrounding Daisey's play?