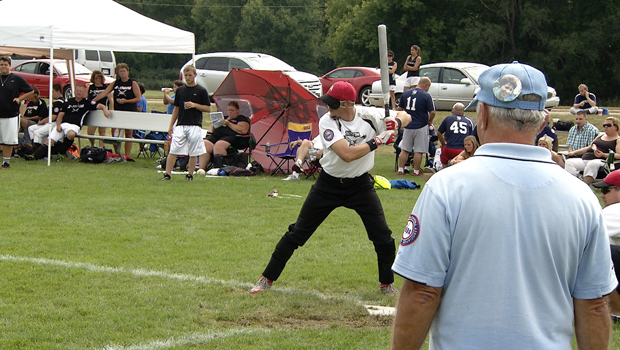 Not your usual regulation baseball. It's called a "Beep Baseball" It announces its location, speed and direction with its every beep, allowing some very determined lovers of the game to "play it by ear." Our Cover Story is reported by Mark Strassmann:

You might think a 32-year-old father of four playing in a baseball league is just a guy trying to relive his youth. And in Brandon Chesser's case, you'd be right.

Sorts were Chesser's life as a kid growing up in Texas. Little did he know then, sports would be what saved his life.

It all started when he was eight ...

"I was standing in right field during a baseball game," he said, "and a ball was hit, and it was hit directly to me, but I never knew it was out there. Everything beyond 10 feet was a blur."

Brandon was diagnosed with retinitis pigmentosa, a degenerative eye disease. His vision loss was gradual. In high school, he could still read textbooks. He even played varsity football. But by his early twenties, Brandon could hardly see.

"Everything past three feet was a kaleidoscope, and everything between my nose and three feet were blurred shapes," he said.

"Must have been hard to take," said Strassmann.

He met his future wife, Pam. She's also blind, and on their first date, Chesser told her about his childhood love of sports.

And she told him about the Austin Blackhawks and "beep baseball" -- baseball for the blind.

Amazing just to watch, but imagine playing, unable to see anything.

Some players have partial sight, others none at all. They all wear blindfolds so that no one has an edge. But because everyone can hear, the ball and the bases all make a beeping sound.

"As soon as the blindfold goes on, I make the transition," said Lupe Perez. "My ears become my eyes. Simple as that."

Perez was born blind; he has never actually seen a baseball game. But Perez started playing in 1990, and is now considered one of the sport's all-time greats.

Strassmann asked, "What's your favorite part of this?"

"Winning!" he replied. "Just like any other athlete. You want to win."

Beep baseball began 40 years ago. A telephone engineer named Charles Fairbanks created a ball -- slightly larger than a softball, incorporating an old telephone speaker and a circuit module -- that beeped.

There are only two bases, first and third, each marked by a padded pylon. When a batter hits a fair ball, a random beep tells him which base to run to. If he touches the base before a fielder gets hold of the beeping ball, it's a run. If not, it's an out.

In this game, the pitcher -- the only player who can see -- is on the same team as the batter. The pitcher calls "Get ready," and the batter listens for the beep and times the swing.

Kevin Sibson has pitched for the Austin Blackhawks for 29 years, ever since he founded the team with his brother, Wayne, who is blind.

"I know what you do for them," said Strassmann. "What do they do for you?"

"There is a synergy between the batter and the pitcher that's like nothing else in sports," Sibson replied.

Chesser agreed that there is a tremendous relationship built on trust: "That's why we call ourselves a family, 'cause we're closer than a team. We trust one another. We have faith in one another."

Strassmann asked, "For people who would watch this and say, 'Oh, that's nice, some blind people are playing a game,' how competitive is this for people who have never seen it before?"

"You're talking about grown men and women playing a sport where they'll do anything to get that championship title," said Chesser.

Back in August, Chesser and the Blackwhawks, and 19 other teams, traveled to Rochester, Minn., for the 39th annual Beep Baseball World Series.

The Blackhawks swept their first five games. One more team to beat -- an Indianapolis powerhouse, the RHI X-treme.

The championship would come down to a dramatic play in the final inning: A hit to right field, that the former high school football star was there to field.

Brandon Chesser caught the final out, and the Austin Blackhawks saw themselves for who they were: World champions.

"Nothing can feel that good, ever again," Chesser said.

He had a message for others: "Don't let anybody ever tell you 'You can't do that.' I've always been told, 'You can't do it' because I'm blind. You know what? I've stepped over everyone, and now, I'm a world champion, even though I'm blind!"

Bringing back the hits: Mining music catalogs for gold

Interracial marriages now more common, but not without challenges
Thanks for reading CBS NEWS.
Create your free account or log in
for more features.
View CBS News In
CBS News App Open
Chrome Safari Continue
Be the first to know
Get browser notifications for breaking news, live events, and exclusive reporting.