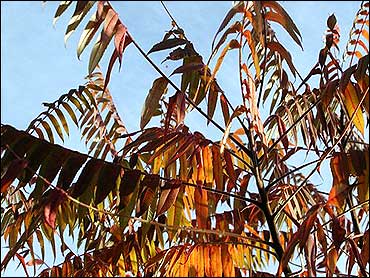 A study of plant fossils from the Bighorn Basin in Wyoming shows the arrival of plants from warm southern areas, displacing those that had been growing there previously, according to a research team led by Scott L. Wing, chairman of the Department of Paleobiology at the Smithsonian's National Museum of Natural History.

Their findings are reported in Friday's issue of the journal Science.

The group studied a period called the Paleocene-Eocene Thermal Maximum, when the planet warmed up over about 10,000 years, raising the average temperature by between 9 degrees and 18 degrees Fahrenheit. The warmth lasted for 80,000 to 120,000 years.

The team reported that before and after the warm period plant fossils included such northern plants as relatives of dawn redwood, alder, sycamore, walnut and sassafras. But during the warm period fossils show the area supported different vegetation, including members of the bean family and warmth-loving relatives of poinsettia, sumac and paw-paw.

The southern plants had spread 1,000 miles from the Gulf Coast to Wyoming, but disappeared when the climate cooled off.

That warming was caused by an influx of carbon into the atmosphere, similar to current concerns about the potential cause of global warming.

"No two events are ever exactly the same, but the history of life on this planet has a lot to tell us about our possible future," Wing said in a statement.