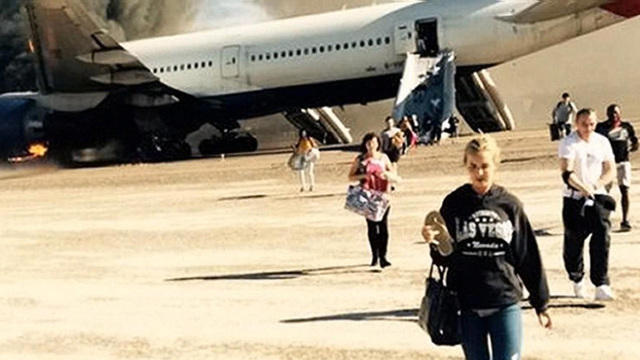 An airline trade group predicts more than 42.5 million people will fly on U.S. carriers during this holiday season. That’s up three and a half percent from last year.

Flying is considered the safest way to travel, but it can still have problems. Two Southwest jets made emergency landings this week, and a United Airlines plane skidded to a stop in San Antonio when its landing gear collapsed.

In October, at least two dozen people suffered minor injuries when an American Airlines plane burst into flames at Chicago’s O’Hare Airport, forcing 170 people to evacuate. Some of the passengers filed a lawsuit claiming American Airlines was negligent in supervising and directing the evacuation.

For decades, airlines have tried to capture the public’s attention about what to do in an emergency through safety videos, onboard demonstrations, placards in seat-back pockets and even cute animated cartoons. But if there’s one message flight attendants want the traveling public to know in an emergency, it’s to leave everything behind — including your carry-on, reports CBS News travel editor Peter Greenberg.

Seconds before takeoff, American Airlines Flight 383 came to an abrupt stop when its right engine became engulfed in flames.

“Everyone on the right side of the plane jumped up and jumped onto us because as soon as the explosion happened, there was fire,” said Sarah Ahmed Furno. The business traveler was inside the smoke-filled plane as panic set in.

“You can’t see anything and there’s absolute chaos in the cabin. So at that point there’s a stampede and everyone’s jumping on each other.”

Ahmed Furno is one of 18 passengers involved in a lawsuit against American Airlines and the plane and engine manufacturers, Boeing and General Electric. Among the allegations is that American “failed to instruct” passengers on “proper and safe evacuation procedures.”

Cellphone video taken onboard shows the plane’s overhead bins in the open position, indicating that some passengers took their carry-on bags with them when they left the plane.

“I saw two flight attendants at the front of the plane and they yelled at me and said, ‘Oh, leave your bag,’” Ahmed Furno recalled. “I was the last one off and I just — I ignored them and jumped down the slide.”

The incident is the latest in what’s becoming an alarming trend during aircraft emergencies. In August, passengers were seen heading for the door with their bags as smoke filled an Emirates Air Boeing 777 in Dubai.

Photos posted to social media showed the same rule being broken aboard a British Airways jet in Las Vegas last year, and after the 2013 crash landing of an Asiana plane in San Francisco.

For any aircraft to be certified as airworthy, flight crews have to demonstrate they can evacuate a fully loaded plane, with half the exits blocked, in less than 90 seconds. But the question remains — who’s training the passengers?

In a cabin simulator, Delta flight attendants are trained how to evacuate a fully-loaded plane. Everyone here knows what to do in emergency. But in a real-life disaster, the situation is far less predictable.

“Medical emergencies, decompressions, security — you name it,” said Pauline Harrison, a safety instructor with Delta Airlines. “Our biggest challenge is that people do want to take their luggage off an aircraft. Why in the world would you stop and take a selfie or take a bag or anything like that?”

“But we live in a selfie world where everybody wants to take that selfie,” Greenberg said.

“Yes sir, but that person that does that is going to keep you from getting out of that aircraft,” Harrison said.

Flight attendants said the problem lies in part with the safety video. As detailed and entertaining as they might be, they said passengers either don’t listen closely or worse yet, ignore the video altogether. That’s what happened before US Airways Flight 1549 made its famous emergency landing in New York’s Hudson River in 2009.

“Before the flight, only 12 of our passengers had read the safety briefing card and only about 24 had paid attention to the safety demonstration,” said CBS News aviation and safety expert Chesley Sullenberger.

Sullenburger was the captain of the legendary flight now known as the “Miracle on the Hudson,” in which all 155 passengers and crew survived. He fears it may not be until people die during an evacuation that the traveling public finally pays attention.

“Let’s hope that it doesn’t take a high body count in a horrific accident where people cannot escape to finally remind people that they must leave their belongings behind,” Sullenberger said.

American Airlines responded to the lawsuit with a statement issued to “CBS This Morning” saying: “We’re proud of our pilots, flight attendants, and other team members who responded quickly to take care of our customers under very challenging circumstances.”

In one final note of irony, Sullenberger said that on that miraculous day on the Hudson, passengers who grabbed their bags as they left the plane ended up losing them in the river. But those who followed instructions and left without their luggage eventually had their bags returned.