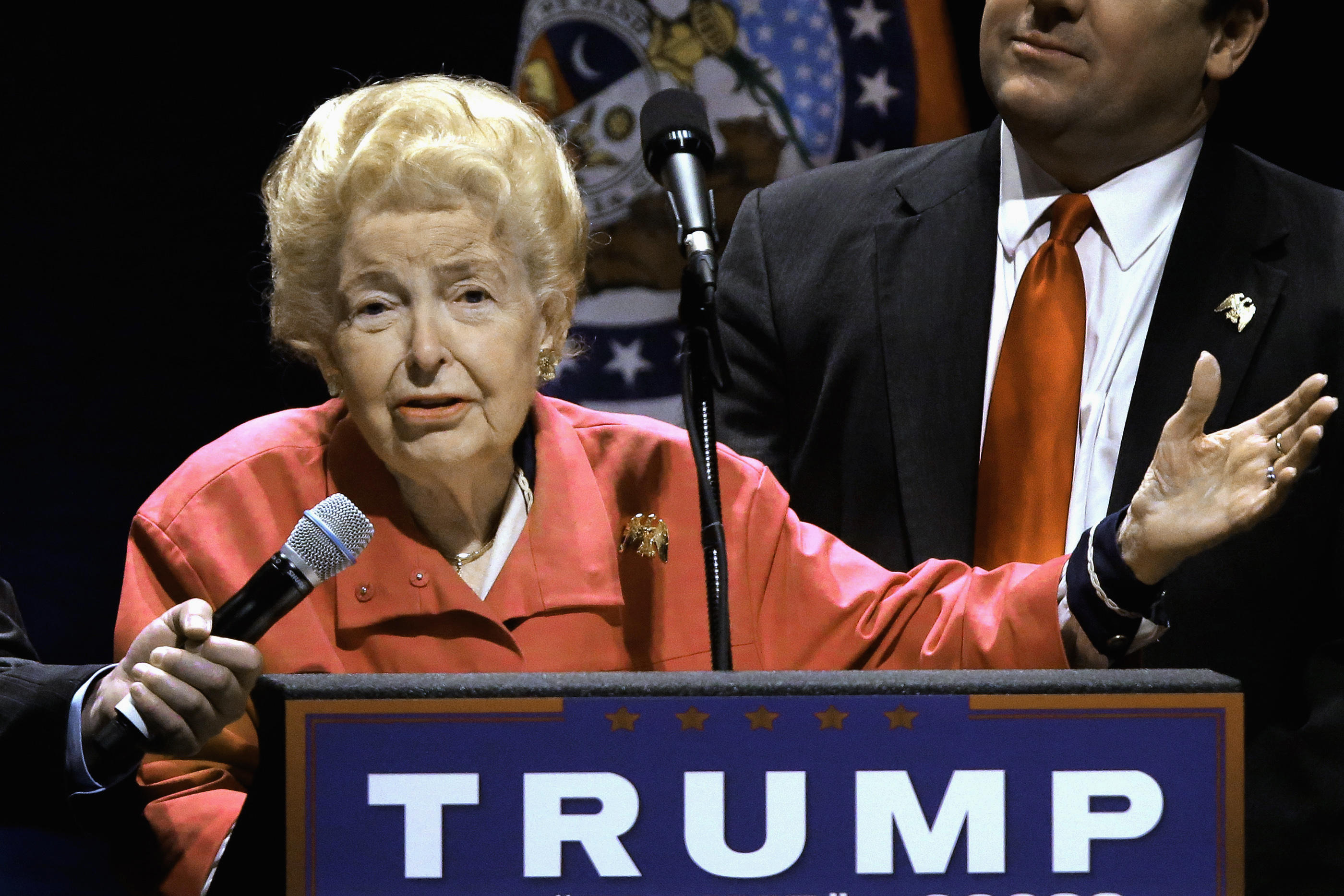 ST. LOUIS -- Phyllis Schlafly, the outspoken conservative activist who helped defeat the Equal Rights Amendment in the 1970s and founded the Eagle Forum political group, has died. She was 92.

Schlafly rose to national attention in 1964 with her self-published book, “A Choice Not an Echo,” that became a manifesto for the far right. The book, which sold three million copies, chronicled the history of the Republican National Convention and is credited for helping conservative Sen. Barry Goldwater of Arizona earn the 1964 GOP nomination.

She later helped lead efforts to defeat the proposed constitutional amendment that would have outlawed gender discrimination, galvanizing the party’s right. She’d graduated from college while working overnight at a factory during World War II, her newspaper column appeared in dozens of newspapers and she was politically active into her 90s - including attending every convention since her first in 1952.

Yet she told The Associated Press in 2007 that perhaps her greatest legacy was the Eagle Forum, which she founded in 1972 in suburban St. Louis, where she lived. The ultraconservative group has chapters in several states and claims 80,000 members.

“I’ve taught literally millions of people how to participate in self-government,” Schlafly said. “I think I’ve built a wonderful organization of volunteers, mostly women but some men, willing to spend their time to get good laws and good politicians.”

The Eagle Forum pushes for low taxes, a strong military and English-only education. The group is against efforts it says are pushed by radical feminists or encroach on U.S. sovereignty, such as guest-worker visas, according to its website, which describes the Equal Rights Amendment as having had a “hidden agenda of tax-funded abortions and same-sex marriages.”

As momentum grew in the 1970s for the amendment, Schlafly became its most outspoken critic - and was vilified by its supporters. She had a pie smashed into her face and pig’s blood thrown on her, and feminist Betty Friedan once told Schlafly: “I’d like to burn you at the stake.” She was chastised in a 1970s “Doonesbury” - a framed copy of which hung on her office wall.

“What I am defending is the real rights of women,” Schlafly said at the time. “A woman should have the right to be in the home as a wife and mother.”

“They were never able to show women would get any benefit out of it,” she told the AP in 2007. “It (the U.S. Constitution) is already sex-neutral. Women already have all the rights that men have.”

Saint Louis University history professor Donald Critchlow, who profiled Schlafly in his 2005 book, “Phyllis Schlafly and Grassroots Conservatism: A Woman’s Crusade,” said the defeat of the amendment helped revive conservatism and helped pave the way for Ronald Reagan’s election in 1980.

“What the ERA (defeat) did was show the right, and especially Reagan strategists, that a new constituency could be tapped to revitalize the right. It allowed the right to take over the party,” Critchlow told the AP shortly after his book was written.

Schlafly was born Aug. 15, 1924, and grew up in Depression-era St. Louis. Her parents were Republican but not politically involved.

Her own activism was born partly out of convenience. With the country involved in World War II during her college years, Schlafly worked the graveyard shift at the St. Louis Ordnance Plant. Her job included testing ammunition by firing machine guns. She would get off work at 8 a.m., attend morning classes, then sleep in the middle of the day before doing it all over again.

The schedule limited her options for a major. “In order to pick classes to fit my schedule I picked political science,” Schlafly recalled in the 2007 interview.

She graduated from Washington University in 1944, when she was 19. Her first taste of real politics came at age 22, when she guided the 1946 campaign of Republican congressional candidate Claude Bakewell, helping him to a major upset win.

In 1952, with her young family living in nearby Alton, Illinois, Schlafly’s husband, attorney John Schlafly Jr., was approached about running for Congress. He declined, but she ran and narrowly lost in a predominantly Democratic district. She also ran unsuccessfully for Congress in 1970.

Schlafly earned a master’s degree in government from Harvard in 1945. She enrolled in Washington University School of Law in 1976, and at age 51, graduated 27th in a class of 204.

Schlafly received an honorary degree at Washington University’s commencement in 2008. Though some students and faculty silently protested by getting up from their seats and turning their backs to the stage, Schlafly called it “a happy day. I’m just sorry for those who tried to rain on a happy day.”

Citing Schlafly’s views about homosexuals, women and immigrants - she was an outspoken opponent of same-sex marriage, abortion rights and loosening U.S. border restrictions - protesters said she went against the most fundamental principles for which the university stood.

Schlafly remained active in conservative politics well into her 80s, when she was still writing a column that appeared in 100 newspapers, doing radio commentaries on more than 460 stations and publishing a monthly newsletter.