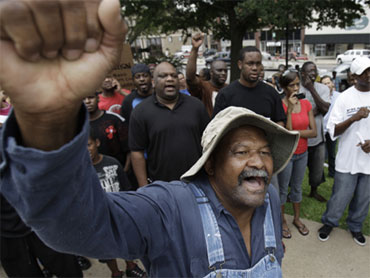 (AP Photo/LM Otero)
Man raises his fist during a protest between hundreds of black and white protesters who exchanged screams of "Black power!" and "White power!"

PARIS, Texas (CBS/AP) What started as a protest at a town square in Paris, Texas on Tuesday, ended in a screaming showdown with police in the middle.

On one side of a downtown street in the east Texas town stood about 200 protesters chanting "black power" and led by a group of New Black Panthers clad in paramilitary outfits and black berets. On the other side of the street stood several dozen counter-protesters - a motley collection of self-proclaimed Ku Klux Klan members, skinheads and Nazi flag lovers yelling "white power!"

Photos: KKK and Black Panthers Square Off in Texas
At the center of the debate was a disturbing death: a black man was dragged 70 feet under a truck to his death. Two of his white friends were charged with his killing and subsequently released due to lack of evidence. Also, another man had come forward saying he may have accidentally run the victim over with his gravel truck.

But the facts of the case don't speak to the anger that has boiled over in this small east Texas town named after the world's romance capital.

In the end, state police in riot gear separated the groups, breaking up a standoff that ended with two arrests and no injuries.