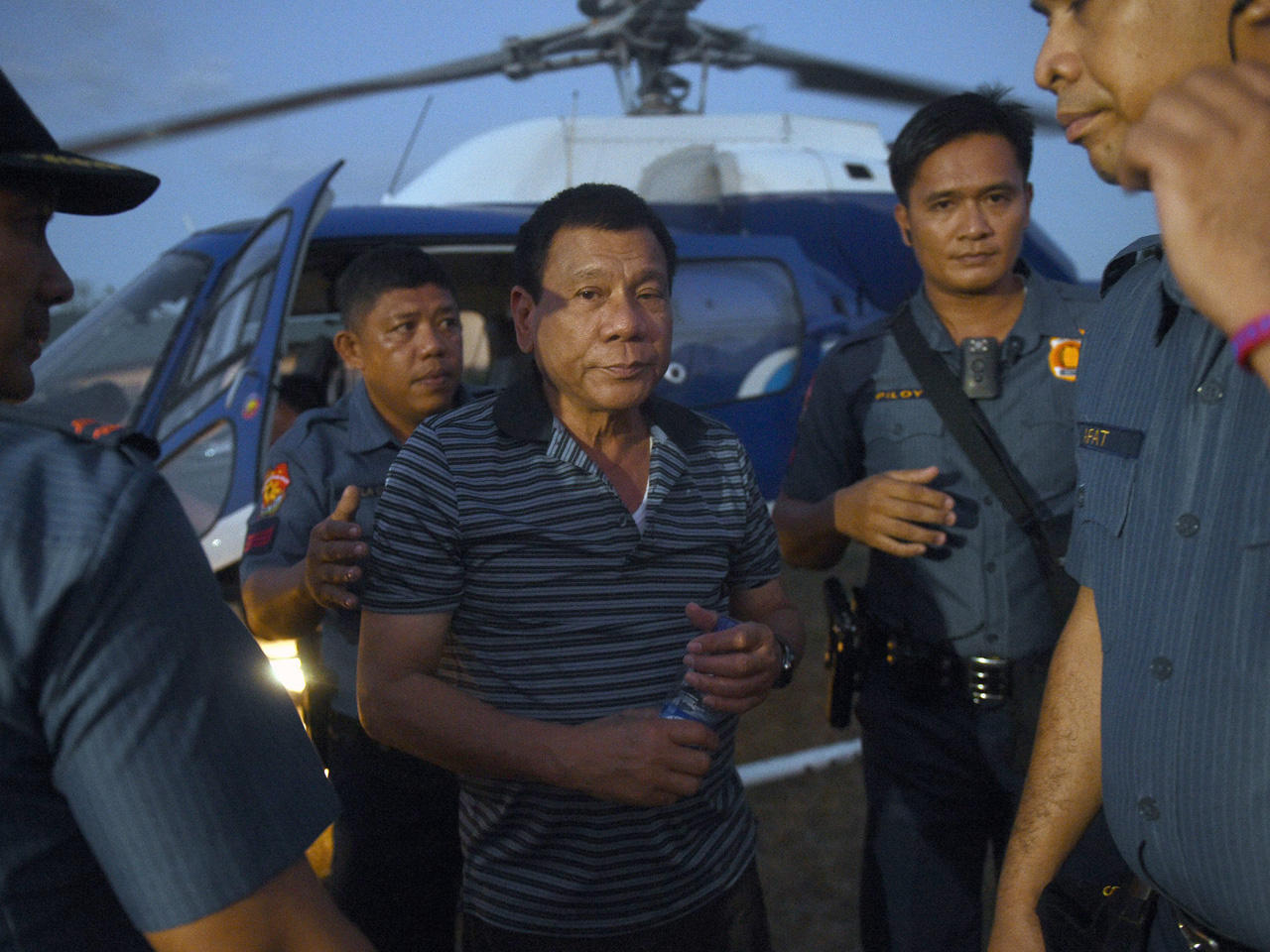 MANILA, Philippines – While speaking about recovery from Typhoon Nock-Ten in the Philippines, President Rodrigo Duterte claimed he has thrown someone out of a helicopter.

Duterte flew to typhoon-hit provinces and warned in a speech in Camarines Sur that he’ll throw out of a helicopter anybody who would steal the financial aid he brought for storm survivors.

“I’ve done that, why won’t I do it again?” Duterte said in a threat that won applause from typhoon survivors.

The bombastic Duterte has become as infamous for his brutal crackdown on drugs in the Philippines as his wild public pronouncements. He has also been accused of murder previously.

Many Filipinos appear to take his broad claims in stride, as his domestic popularity remains high.

He said without elaborating on “I’ve done that,” suggesting they were kidnappers who killed or raped captives even after being paid ransoms. “I’ll throw you at a low altitude, not that high, because in the length of the fall you may be able to develop wings, just at the right (altitude) so the impact of your crash won’t be heard.”

The president’s past extreme comments against suspected drug pushers and corrupt officials have left many wondering if he was exaggerating, and administration officials have said he often uses hyperbole as a scare tactic.

Still, U.N. High Commissioner for Human Rights Zeid Ra’ad Al Hussein last week called on Philippine authorities to investigate Duterte for murder after he claimed to have personally killed people in the past.

Meanwhile, in the typhoon recovery, the Philippine coast guard pressed its search Tuesday for 18 crewmen from a cargo ship that sank at the height of the storm, which struck the country on Christmas Day.

Coast guard spokesman Armand Balilo said 14 other crewmen have been rescued and one died after the M/V Starlite Atlantic sank off Mabini town in Batangas province, where the powerful typhoon passed Monday on its way out of the country into the South China Sea.

The Starlite Atlantic sought cover in an anchorage area as the typhoon passed and its crew decided to move to safer waters but encountered huge waves and fierce winds, causing their ship to sink, Balilo said, adding that another passenger and cargo ship ran aground in Mabini, south of Manila.

At least seven people died from the typhoon, including the sunken ship’s crewman and villagers who drowned from flooding or were pinned by fallen trees or a collapsed wall in Albay and Quezon provinces.

Duterte flew to the hard-hit town of Virac on the eastern island province of Catanduanes, where the typhoon made landfall on Sunday night, to witness the distribution of food packs to residents. Ahead of the president’s visit, Defense Secretary Delfin Lorenzana and top military officials flew to Virac and were stunned by the extent of devastation.

“Their common perception is that Virac is completely devastated,” military spokesman Brig. Gen. Restituto Padilla said of the coastal town of more than 70,000 people. The province’s coconut plantations, the primary industry, were destroyed and may take five to 10 years to recover, he said.

From a helicopter, “we saw the devastation of coconuts, abaca and the forests. There are lots of houses without roofs,” Lorenzana said by text message. “There is no electricity yet in all of Catanduanes.”

In Camarines Sur, Duterte warned that whoever touches the financial aid for the typhoon-battered province, “I will fetch you in a helicopter and on the way to Manila, I’ll throw you out.”

Nock-Ten, locally known as Nina, forced more than 420,000 villagers to abandon their Christmas celebrations for emergency shelters and other safer grounds. Power was knocked out in several provinces and flights and ferries were grounded, stranding would-be passengers.

About 20 typhoons and storms lash the Philippines each year. In the past 65 years, seven typhoons have hit on Christmas Day, the Southeast Asian nation’s biggest holiday.

The storm was one of the strongest to hit the Philippines since Typhoon Haiyan left more than 7,300 people dead or missing and displaced over 5 million in 2014.