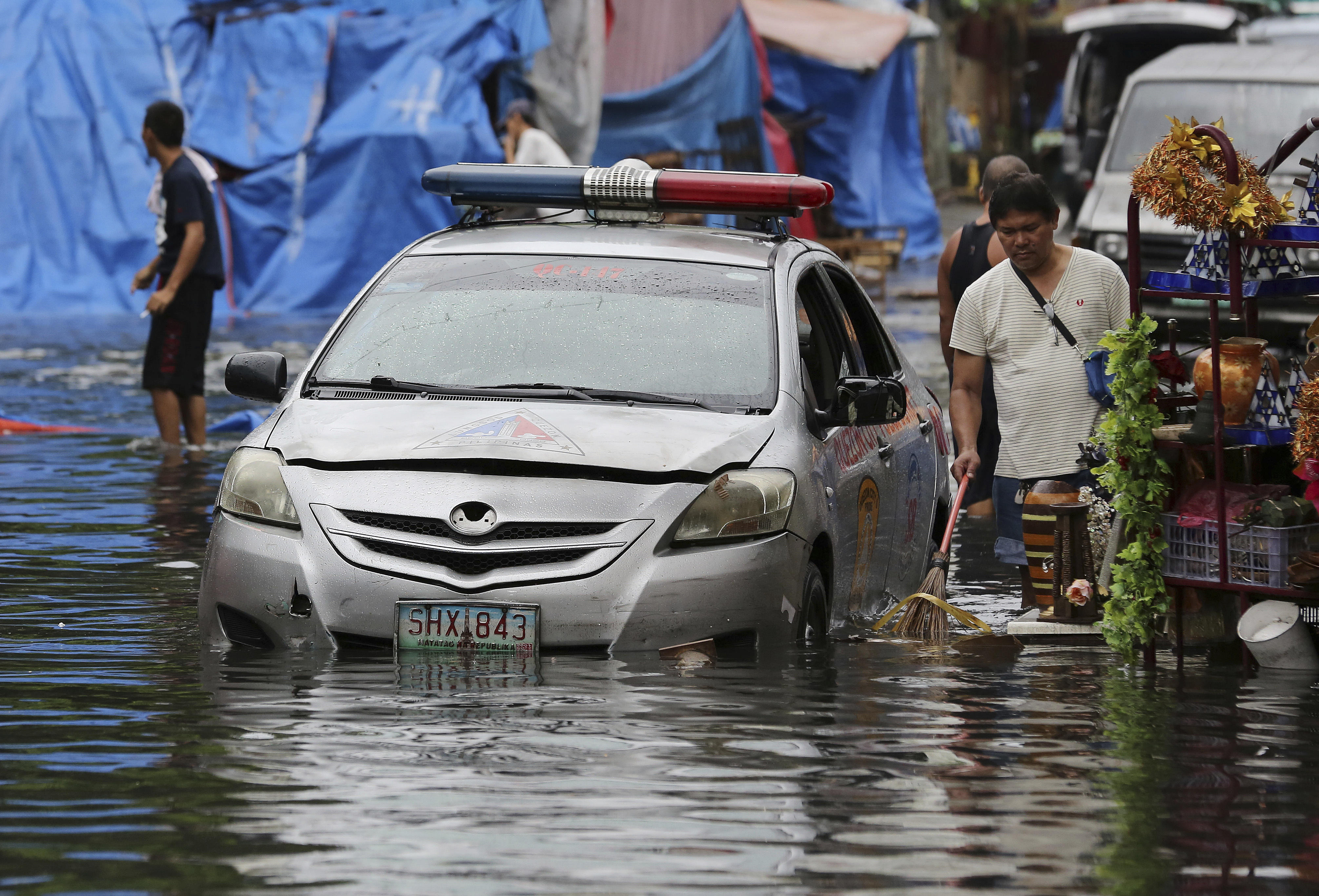 Officials said Typhoon Nock-Ten killed at least one person and cut power to five provinces as well as displacing thousands of villagers and travelers in Asia’s Catholic bastion.

Typhoon Nock-Ten was packing maximum sustained winds of 114 miles per hour and gusts of up to 158 mph when it made landfall Sunday night in Catanduanes province, where fierce winds and rain knocked down the island’s power and communications, officials said.

After Catanduanes, the typhoon, which had a 300-mile rain band, was expected to barge westward across the mountainous southern plank of the Philippines’ main island of Luzon and blow close to the capital, Manila, on Monday, before starting to exit toward the South China Sea. Nock-Ten may weaken after hitting the Sierra Madre mountain range in southern Luzon.

Christmas is the biggest holiday in the Philippines, which has Asia’s largest Roman Catholic population, making it difficult for officials to get people’s attention to heed the warnings. With many refusing to leave high-risk communities, some officials said they decided to carry out forced evacuations.

In the past 65 years, seven typhoons have struck the Philippines on Christmas Day, according to the government’s weather agency.

“I know it’s Christmas ... but this is a legit typhoon,” Villafuerte tweeted on Christmas Eve. “Please evacuate, we’ll be having lechon at evacuation centers.”

Camarines Sur officials had targeted about 50,000 families -- some 250,000 people -- for evacuation by Saturday night, but the number of those who responded was initially far below expectations.

In Catanduanes province, Vice Gov. Shirley Abundo said she ordered a forced evacuation of villagers, saying some “are really hard-headed, they don’t want to leave their houses because it’s Christmas.”

“We need to do this by force, we need to evacuate them now,” she told ABS-CBN television.

The Department of Social Welfare and Development, which helps oversee government response during disasters, said only about 4,200 people were reported to have moved to six evacuation centers by Sunday morning in the Bicol region, which includes Camarines Sur.

“It’s difficult to force celebrations when our lives will be put at risk. Please prioritize safety and take heed of warnings by local government units,” welfare official Felino Castro told The Associated Press by phone.

Food, water and other emergency supplies had been pre-positioned in areas expected to be lashed by the typhoon, Castro said. His department was to activate an emergency cluster comprising the military, police, coast guard and other agencies Sunday to oversee disaster-response plans.

In the farming town of Guinobatan in Albay province, which is near Nock-Ten’s path, more than 17,600 villagers moved to evacuation shelters without hesitation because of fears of a repeat of a typhoon several years ago that unleashed smoldering mudflows from nearby Mayon Volcano, leaving hundreds dead, the town’s mayor, Ann Ongjoco, said by phone.

Josefina Nao, who evacuated to a Guinobatan school with her six children, grandchildren and siblings, said that Sunday was one of her bleakest Christmas holidays, but that poor people like her did not have much choice. She said it was tough to replicate Christmas away from home, adding that town officials tried to cheer evacuees by distributing holiday food such as spaghetti.

“We live in a flood-prone community near a river where many had been swept to their deaths by floodwaters during typhoons,” the 60-year-old Nao said by phone from a classroom-turned-storm shelter that was void of any Christmas lights or decorations. “I wish it was a merrier Christmas, but this is our best option because we’ll all be safe together.”

About 20 typhoons and storms, mostly from the Pacific, lash the Philippines each year, making the poor country of more than 100 million people one of the most disaster-prone in the world.

In November 2013, Typhoon Haiyan struck the central Philippines with ferocious power, leaving more than 7,300 people dead or missing and displacing more than 5 million after leveling entire villages despite days of dire warnings by government officials.