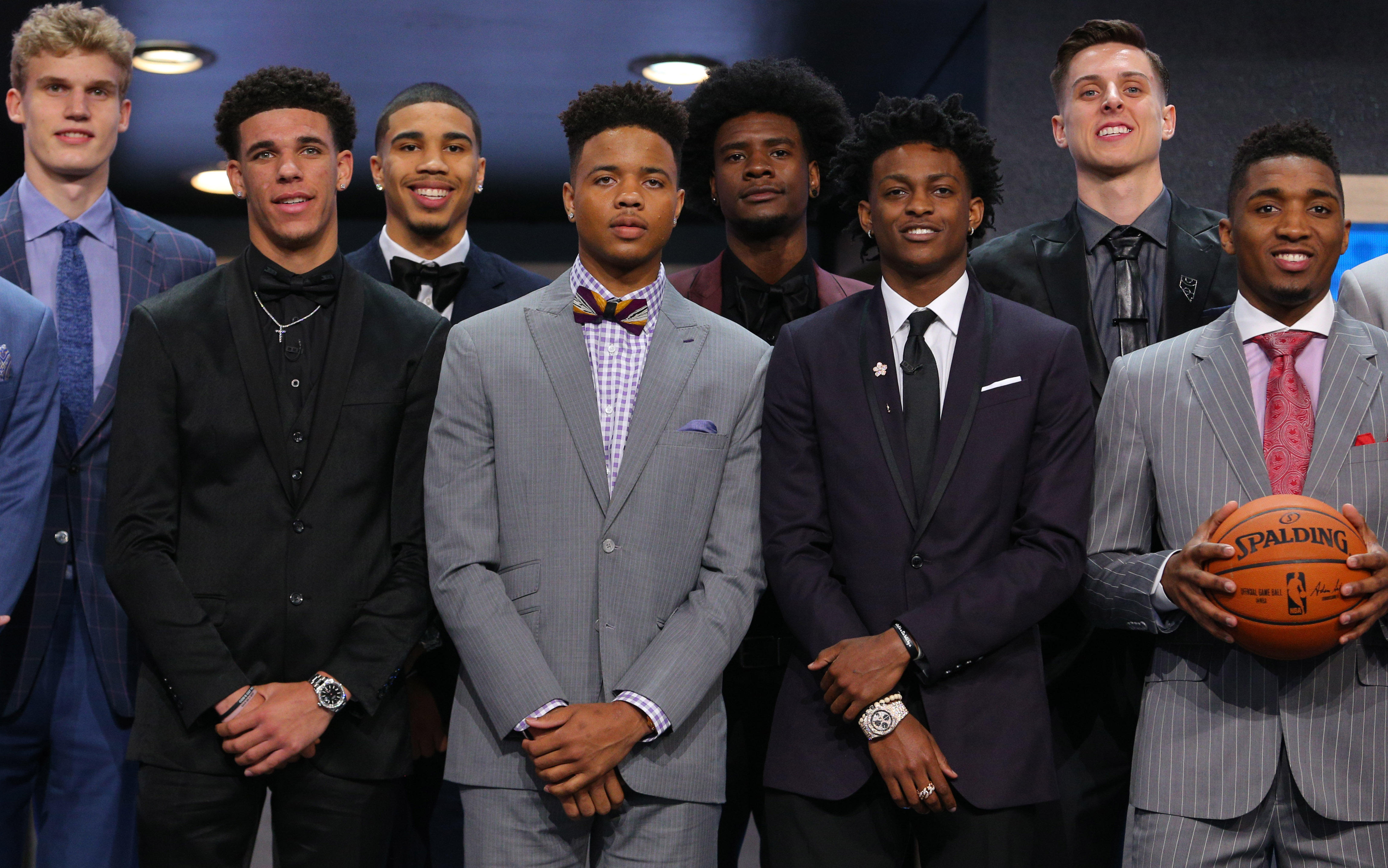 NEW YORK -- The Philadelphia 76ers have selected 6-foot-4 guard Markelle Fultz with the No. 1 pick in the NBA draft.

Fultz averaged 23.2 points last season at Washington, tops among freshmen, and added 5.9 assists and 5.7 rebounds per game, the only Division I player to reach those stats. He walked across the stage Thursday night at Barclays Center wearing red sneakers made of basketballs.

The 76ers had the No. 1 pick for the second straight year after trading with the Boston Celtics on Monday.

Fultz joins Joel Embiid and Ben Simmons, last year's No. 1 overall pick, to give the Sixers one of the most exciting young cores in the NBA, CBS Sports reports. The Sixers had previously said that Simmons would serve as the de facto point guard once healthy, so it will be interesting to see if Fultz, who has mostly played point guard, shifts to playing off the ball in Philadelphia's system, CBS Sports said.

Embiid welcomed Fultz to Philly with a tweet -- what else ? -- where he proclaimed the new nickname was FEDS : Fultz, Embiid, Dario, Simmons.

"He used to tweet and retweet my stuff," Fultz said. "Once he figured out I had a chance to go there, he started showing more love and everything like that."

Fultz, who played just 25 games in college, said it was always his dream to be the top pick and wasn't bothered that Boston traded the chance to take him.

"In high school I told my trainer Keith I wanted to be the No. 1 player in the country and the No. 1 draft pick, so it was a goal I set out there, and that's what I was striving for," Fultz said.

Could it be that Fultz's arrival mean The Process is finished?

"We're going to try to make the right decisions to finish this project," Colangelo said.

Lonzo Ball of UCLA and his dad are staying home with the Los Angeles Lakers. The team chose Ball in the No. 2 overall pick of the night.

The Lakers don't appear concerned by LaVar Ball, the voluble father with aspirations of building a global sports empire around his three talented sons. Ball raised his family in the Los Angeles suburbs.

Ball receives comparisons to Jason Kidd for his offensive abilities. He led the nation with 7.7 assists per game while quarterbacking the highest-scoring offense in Division I, and he scored consistently despite an unorthodox shot.

In the NBA draft's first unscripted moment, the Boston Celtics took Jayson Tatum of Duke with the third pick.

The Celtics, who traded the top pick to the Sixers and moved down to No. 3, went with the Duke guard, whose scoring ability fits what Boston needs.

It marks the fourth straight year the Blue Devils have produced a top-three pick.

The Phoenix Suns selected small forward Josh Jackson of Kansas with the fourth overall pick of the NBA draft Thursday.

Jackson brings athleticism, energy and a strong defensive ability to a Suns team already loaded with youthful talent as the franchise continues the long climb to relevance.

The 6-foot-8, 207-pound forward averaged 16.3 points and 7.4 rebounds per game in his lone season with the Jayhawks. The 20-year-old Jackson was the Big 12 freshman of the year and an all-Big 12 first-team selection.

He fills a need for defense that the Suns have needed. His shooting needs work but he is considered by many observers as the best all-around athlete in the draft.

Sacramento had a glaring need for a point guard with Darren Collison, Ty Lawson and Langston Galloway all headed to unrestricted free agency next month and general manager Vlade Divac pounced when Fox was available.

Fox is extremely quick and a skilled ball handler who showed the ability to get to the basket in his one season at Kentucky. He boosted his stock when he outplayed UCLA's Lonzo Ball in the Sweet Sixteen, scoring 39 points in a Wildcats win.

Fox averaged 16.7 points, 4.6 assists and 4.0 rebounds per game. His biggest weakness is his outside shot after hitting just 24.6 percent of his 3-pointers last season.

This marked the fourth time since 2010 that the Kings came out of the draft with a first-round player from Kentucky. They drafted center DeMarcus Cousins in 2010, big man Willie Cauley-Stein in 2015 and swapped picks last year to end up with center Skal Labissiere.

The Kings are once again looking to rebuild after missing the playoffs for an 11th straight season. They traded away star Cousins during the season to New Orleans and stumbled to the finish in a 32-50 season under first-year coach Dave Joerger.

Head over to CBS Sports for the rest of the picks and analysis from this year's NBA draft.