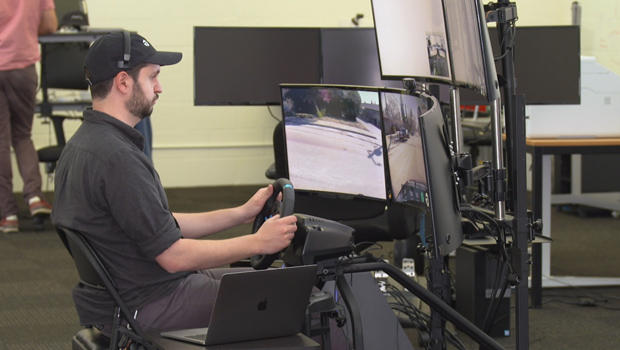 Before long we won't need someone behind the wheel, but as we've seen, the computers that will be driving us around are not always going to know what do to – like in a construction zone. When that happens, the car is going to need a little help, and one small California startup says it has the answer when the car needs to "phone a friend."

As correspondent Kris Van Cleave was taken for a ride in a self-driving car, Ben Shuckman, a remote driver a few miles away in a Silicon Valley office, announced his presence: "Welcome everybody, my name is Ben and I will be your Phantom remote operator for this drive: I'll be monitoring your vehicle remotely."

California is one of at least five states that now allows self-driving cars to be on the road without a safety driver, if they have a system in place for a human to take over remotely.

If you're wondering why an autonomous vehicle might need somebody like Ben: as self-driving technology advances -- we know that General Motors, for example, is going to build one without a steering wheel, gas pedals or brakes -- if there was a situation where the autonomous car had to stop and didn't know what to do, a passenger couldn't do anything to help. They would need somebody to intervene remotely.

Phantom Auto doesn't build self-driving cars, but they're hoping their technology can come to the rescue of a "confused" autonomous vehicle. It uses cell phone signals and cameras already mounted to the vehicle, so a remote driver can take over in a situation where the car doesn't know what to do – the ultimate backup.

Phantom Auto sees its service working a bit like On-Star, a remote help desk reachable automatically or with the touch of a button by passengers, where one person could be the backup driver for multiple vehicles, leaving the backup for the self-driving car firmly in the hands of a human.

Waymo, the self-driving company owned by Google's parent alphabet, is developing its own assist technology. Nissan is working on a system where the autonomous vehicle would stop and wait for a remote user to draw it a map around an obstacle.

Phantom's technology allows the passenger and remote driver to see and talk to each other. Van Cleave asked Shuckman what it's like to drive a car from very far away. The remote drive replied, "go through a very strict training procedure in order to learn how to operate something completely new."

When asked about the possibility of a self-driving car being hacked, Katz said, "We have a system in place where our architecture can fit into the vehicle in a way where we can override a malicious hacker."

Federal regulations regarding self-driving vehicles are stalled in Congress, leaving oversight largely to the states; some are stricter than others. The self-driving Uber crash which killed a pedestrian in Arizona has prompted states to take a second look at their regulations, as the technology is not yet fool-proof.

Katz said, "We can bridge the technological gap from 99 percent to 100 percent by keeping a human in the loop."

"Even after the Uber crash, you think the technology is 98, 99 percent there?"

"The last one or two percent is a really, really difficult piece of the puzzle to solve. So, it could be years until the technology is at 100 percent."