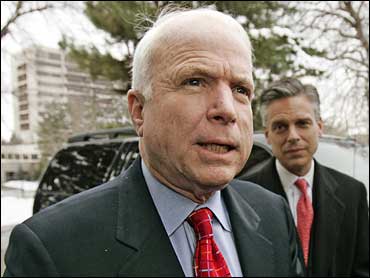 Whether the new dynamic in Iraq can salvage McCain's troubled campaign is far from certain. But he is wooing voters with a sense of momentum not seen since he drastically reduced his staff and spending two months ago.

Senators say McCain, more than any other presidential hopeful, benefited from Petraeus' claim that the seven-month-old troop escalation in Iraq was mostly a success and has helped stabilize key parts of the country.

From the war's start, McCain argued for more troops and was Congress' most prominent defender of the increase that President Bush announced in January.

This week, McCain launched a "No Surrender" tour of Iowa with a clear "I-told-you-so message." His allies hope it will give him a new edge over GOP rivals, including Rudy Giuliani, Fred Thompson and Mitt Romney.

"The difference between them and John is that John said it before anybody else, took the heat for saying it, and without him, there would have been no surge," Sen. Lindsey Graham, R-S.C., said in an interview Wednesday.

"Now John is center-stage next week beating back political efforts to undercut the surge," said Graham, a longtime McCain supporter. "He will be standing with generals in the field against would-be political generals."

McCain's staunch support of the war could hurt him with independent voters in a general election. But for now, he is focused on die-hard Republicans, especially in Iowa, New Hampshire and South Carolina.

In those circles, support for Bush and the war still runs fairly high, and McCain's prominent role in this week's congressional testimony by Petraeus and Ambassador Ryan Crocker could not be matched by his main rivals.

Democratic voters overwhelmingly say the Iraq war a mistake, but 69 percent of Republicans support it, according to a recent AP-Ipsos poll. Similar divisions were found when respondents were asked about the success of the troop increase and the likelihood that history will judge the war a success.

As the debate intensifies on Capitol Hill, McCain's supporters hope he will benefit from less focus on illegal immigration, where his support of legalization strategies deeply hurt him among many conservatives.

The Petraeus-Crocker testimony, plus Bush's planned national address Thursday night, are intensifying the spotlight on an issue that - in GOP circles, at least - is much better for McCain, they say.

"He's always going to have an uphill fight with the party's most conservative voters," said Dan Schnur, a campaign aide to McCain in 2000 who now teaches at the University of Southern California and University of California at Berkeley. "But for those Republicans who have become uneasy with the progress in Iraq, this is an opportunity to bring those voters back."

He opened his questioning of Petraeus on Tuesday by saying, "Some of us from the beginning warned against the (Donald) Rumsfeld strategy of too few troops, insufficient resources and a plan predicated on hope rather than on the difficult business of stabilization and counterinsurgency."

Now, he continued, "We're getting it right because we finally have in place a strategy that can succeed."

Within hours McCain was telling voters in Iowa that he had condemned "a failed policy in Iraq" from the outset.

"I was criticized by Republicans and others for doing so," he said. Still, "I saw it was doomed to failure, and I argued for the strategy that is now succeeding."

McCain still lags in national polls of GOP voters, even if front-runner Giuliani, the former New York mayor, has seen his lead shrink in recent weeks. Others are watching warily to see if the Petraeus-Crocker reports will revive a once-promising campaign that nearly self-destructed in July.

Asked whether the Petraeus report strengthens McCain's hand, Romney, the former Massachusetts governor, told The Associated Press: "I don't know. It strengthens America's future and frankly that's all I care about."

"I think John is well-positioned to emerge on the Republican bill as the guy who is the best prepared and most electable, reliable conservative," he said.