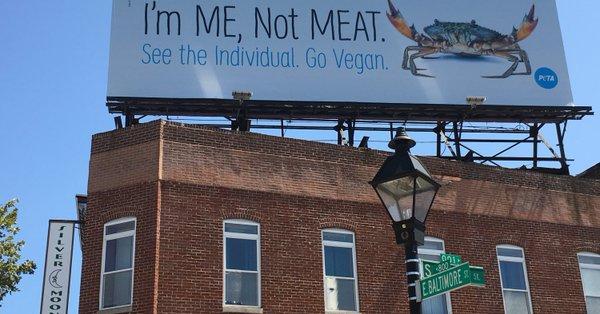 Crabs are friends, not food. Or at least that's the message of a billboard that recently went up in Baltimore urging Marylanders to skip the popular local delicacy and go vegan, CBS Baltimore reports.

Animals rights group PETA put up the placard near seafood restaurants in the city as part of a nationwide campaign to get seafood off people's plates. It features a picture of a crab along with the caption: "I'm ME, not MEAT."

"Just like humans, crabs feel pain and fear, have unique personalities, and value their own lives," PETA Executive Vice President Tracy Reiman said in a statement. "PETA's billboard aims to give Charm City residents some food for thought about sparing sensitive marine animals the agony of being boiled alive or crushed to death in fishing nets simply by going vegan."

Response to the billboard has been mixed, with many locals taking to social media to declare Maryland will never stop eating crabs.

One Twitter user wrote: "Siri, show me the biggest waste of advertising money you've ever seen."

Another seemed to address the crab on the billboard directly: "You are a crustacean that has been around for millions of years and is part of a food chain that feeds animals and humans. Try again."

"You have a better chance of establishing a colony on mars tomorrow," another Twitter user countered.

And some Marylanders argued that while PETA's cause is important, crabs are too touchy of a subject. "Respecting animals is important," said one commenter, who nevertheless warned PETA to "stay out of Baltimore because I'm gonna eat as many crabs as I DARN WELL PLEASE."

One restaurant owner told CBS Baltimore now that the billboard has gone viral, it's been a nightmare for business.

"I don't have nothing to do with this. I sell crab meat," Nick Lentis told the station. "I think they have to remove it."

"I don't think they knew what they are getting themselves into when they put that up," John Minadakis, owner of Jimmy's Famous Seafood, told CBS Baltimore.

PETA says its plan is to keep the controversial sign up through the city's seafood festival next month. The group has placed similar billboards in other East Coast cities, including a lobster-themed one in Maine's busiest airport.