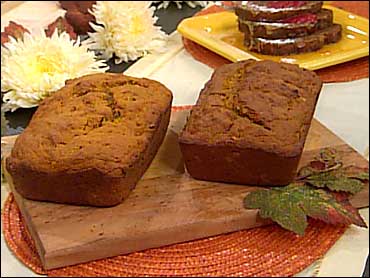 Pumpkins are great for carving or for pies, but The Early Show's resident chef, Bobby Flay, has a great pumpkin bread recipe, and you can use the bread as the base for many other treats, such as French toast!

1.Preheat oven to 350 degrees F. Spray a 9-inch loaf pan with nonstick baking spray. Whisk together flour, baking soda, baking powder, cinnamon, nutmeg, ginger and salt in a large bowl.
2. Whisk together pumpkin puree, sugar, butter, eggs and vanilla in separate large bowl until smooth. Add the flour mixture to the pumpkin mixture and mix until just combined. Fold in the walnuts.
3. Scrape the mixture into the prepared pan and bake in the oven until a toothpick inserted into the center comes out with a few moist crumbs. Let cool in the pan for 10 minutes before unmolding onto a wire rack to cool for 1 hour.

1. Whisk together the eggs and sugar in a large baking dish. Add the milk and vanilla and whisk until combined.
2. Heat 2 tablespoons of the butter and 2 tablespoons of the oil in a large nonstick sauté pan over medium high heat. Dip the pumpkin bread into the egg mixture and soak both sides for about 30 seconds. Place 4 slices of the bread into the pan and cook on both sides until golden brown, about 2 minutes per side. Remove to a platter and repeat with the remaining butter, oil and bread.

Combine sugar and water in a small saucepan over high heat. Cook until the sugar has dissolved and turned a deep amber color, 8 to 10 minutes. Remove from the heat and add the cream and apple brandy. Return to the stove over high heat and cook until combines, about 1 minute. Transfer to a bowl and keep warm.

Using a hand-held mixer, mix together the cream, sugar, cinnamon and nutmeg in a large bowl until soft peaks form.

Incidentally, he says canned pumpkin is fine to use!

1. Combine cranberries, water, sugar and zest in a medium saucepan and bring to a boil over high heat. Cook until the cranberries pop and become soft. Let cool.
2. Combine the butter and cranberries in a food processor and process until smooth.
3. Toast the pumpkin bread until golden brown on both sides. Spread each slice with a few tablespoons of the butter.