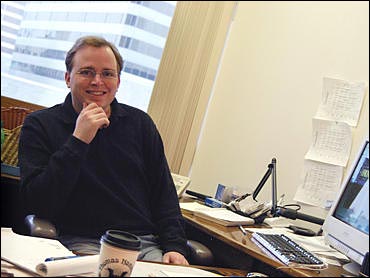 It was 7:50 on a Monday morning. Fog hung over the city and a drowsy voice sounding like a sleepy Winnie the Pooh crawled from the radio.

It was poet Scott Poole reading his latest work.

"I was at a bus stop

But, there was only me

and the bus kiosk," the poem began.

Poole is heard every Monday morning on Spokane Public Radio, and he may be the nation's only regularly scheduled radio poet. His poems are a sideways look at everyday life - odes to garage door openers, naps and the Marvin Gardens square on Monopoly. His recitation is aired during a break in "Morning Edition."

"As long as they'll have me, I'll keep doing them," said Poole, 32, associate director of the Eastern Washington University Press in nearby Cheney.

"At first we got only compliments," said KPBX producer Marty Demarest. "But we've had a decent share of complaints. The fact that we regularly get commentary regarding poetry is a success." But the commonplace nature of his topics is the reason Poole will continue to get nearly two minutes of morning drive time every Monday, Demarest said.

"He doesn't reference deities or philosophers or codes of belief," Demarest said. "It references garages and lawnmowers and everyday life. I love most of his poems, even when I don't understand them."

His poems air on Monday because "very little happens in the news on Monday," Demarest said. "Monday is the wasteland of the radio."

But not generally a home for the likes of "The Waste Land," by T.S. Eliot. Radio is a rare venue for poetry, even though the two forms would seem to be made for each other. The only other poets Poole hears on the radio are cowboy poet Baxter Black, who does commentaries on NPR, and poets who appear on "The Writer's Almanac," a show hosted by Garrison Keillor. Poetry magazine in Chicago had no comment on the topic of radio poets.

One of the most interesting aspects of the show is Poole's voice, which could be mistaken for a woman's or a child's. It's a cuddly, teddy bear kind of voice.

"Scott's radio voice is unlike any voice in public radio," Demarest said. "It's disconcerting enough to know it is not "Morning Edition" you are hearing."

Poole is aware that his puckish voice is distinctive, and he calls it a blessing.

"Everyone is trying to find their voice in poetry," he said. "I was forced into mine from the beginning."

Poole, who was influenced by the imagistic poetry of Richard Hugo, William Stafford and James Wright, and by Eastern European poets, was drawn into writing poetry while trying to meet women as an undergraduate at Washington State University.

Impressed by one coed, he took a piece of paper and burned the edges, then mounted it on black construction paper and "wrote a really terrible poem called `Chambers of My Mind."' Poole gave it to the young woman in the school library and she read it.

"She burst into tears and gave me a big hug and said it was wonderful," he said. "It worked out really well because she ended up marrying me."

He began writing short stories, but found they kept getting shorter until they evolved into poetry. When he went for his master's of fine arts at EWU, he decided to concentrate on poetry.

A native of Vancouver, Wash., Poole moved to Spokane from Portland in 1996 to attend the creative writing program at EWU. After getting his master's, he became the only full-time employee of the EWU Press, which publishes six books a year. He also teaches some poetry courses.

Now, he is on a mission to popularize poetry. He e-mails a new poem each week to 500 people who have registered on his Web site. He is creator of an annual literary festival in downtown Spokane called "Get Lit."

"Spokane is becoming a poetry town," he said.

His latest book, "Hiding From Salesmen," was recently printed in hardback, unusual for a poetry book. His first book was called "The Cheap Seats."

It was Poole's weekly poems that came to the attention of Demarest, who decided to make him a regular fixture in August 2001. Poole records eight to 10 poems each time he's in the studio.

"It's a nice experience," he said.