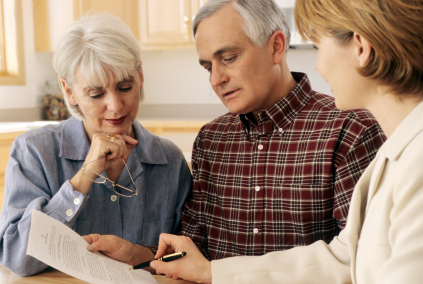 (MoneyWatch) If you're one of those lucky people who will receive a lifetime monthly income from your employer's defined benefit pension plan, you have an important decision to make when you retire: Do you choose a pension that continues the monthly income to your spouse after you die by selecting a "joint-and-survivor" annuity, or do you elect a higher monthly paycheck by choosing a "life-only" annuity that stops after your death?

In my previous "just tell me what to do" series of posts, I advised that people who are married or in a committed relationship should elect a joint-and-survivor annuity to provide a secure income to the spouse or partner should the pension recipient die first. I cautioned against schemes from insurance agents who urge you to elect a life-only annuity and instead buy life insurance to protect your spouse. (I received a comment from a reader accusing me of "fearmongering." Really?)

Then I received an email from another reader -- let's call him Bill to protect his privacy -- who's approaching retirement and who'd been pitched such a scheme by an insurance agent. The agent assured Bill that the life insurance would provide a better retirement income for his wife after his death than the joint-and-survivor annuity under the pension plan.

Retirement planning: just tell me what to do
Pension plan lump-sum payments: Why you should avoid them
Retirement income scorecard: Immediate annuities

Bill provided me with the details of the life insurance and the annuity so I could analyze whether the offer would be a good deal for him and his wife. I concluded that he would have to die within a specific age range for this scheme to provide a higher income to his wife after his death. I also determined that the odds are pretty good that Bill won't die somewhere in the necessary age range, so that this won't be a good deal for the couple. Let's take a look to see how I reached my conclusions.

Bill is planning to retire at age 62; at that time, his wife would be age 64. If he elects a 100 percent joint-and-survivor annuity, he would receive a monthly pension of $1,209, with this amount continued to his wife after he dies. If he elects a life-only annuity, his monthly income would be $1,404 -- $195 higher per month than the 100 percent joint-and-survivor annuity -- but it would stop after his death.

Bill's insurance agent told him that $195 per month would buy an insurance policy that's guaranteed for life; the death benefit would be about $191,000 under a 20-year term policy. By buying such a term policy, the insurance company can't cancel Bill's policy during his lifetime, but after 20 years the premiums will increase to the cost of insurance an 82-year-old man would have to pay.

Bill is waiting to see if the insurance company will charge him a higher premium due to his medical history. If this turns out to be the case, $195 per month would buy a death benefit of less than $191,000.

Does this offer provide a higher survivor income?

My most recent retirement income scorecardshows that $100,000 will buy an annual life annuity for a single woman age 65 of $6,208 and an annual annuity of $6,957 at age 70. (These amounts come from Hueler's Income Solutions, an annuity shopping service that provides competitive, institutional quotes on annuities.) If Bill's wife uses her death benefits to buy an annuity with the agent's insurance company or if she uses another agent to buy a retail fixed annuity, she'll most likely receive an income that's lower than these amounts.

If Bill dies when he's 71 and his wife is 73, however, her monthly income from her annual life annuity would be about $1,230 -- higher than the $1,208 income under the 100 percent joint-and-survivor election. For every year that Bill survives after age 71, his wife's monthly income would increase, since annuity purchase rates are more favorable as you age.

Since there's a good chance that Bill will live beyond age 71, wouldn't it seem like a better deal for him to elect the life-only annuity and buy the life insurance policy? Not so fast.

When does he need to die, and how likely is this?

Remember that this is a 20-year term policy. When Bill reaches age 82, the premium needed to continue his $191,000 policy will skyrocket way beyond $195 per month. Then he'll either need to reduce his lifestyle expenses to afford the higher premium or reduce the amount of insurance, which in turn reduces the monthly income to his wife after his death, a particularly bad outcome when she is very vulnerable financially.

For this insurance scheme to work, Bill needs to die at exactly the right ages -- somewhere between age 71 and age 82. If he dies at any other age, his wife will receive a lower monthly income under the insurance option. According to the simple life-expectancy calculator sponsored by the Society of Actuaries, there's a 50 percent chance that Bill will live beyond age 83; this doesn't include that odds that he could die between ages 62 and 71. If you consider the odds, there's a very good chance that Bill won't die in the 71-to-82 age zone.

The strategy advocated by Bill's insurance agent is just one example of this type of scheme. While it's possible there's an insurance policy out there that could result in higher survivor income for the spouse, I have yet to see one.

Another consideration is your health. Joint-and-survivor annuities with employer-sponsored pension plans cover all employees, even those who are in poor health. But insurance companies can charge you higher premiums if you have a poor medical history, or decline outright to cover you.

If you're interested in a similar insurance strategy, take the time to analyze if it will really provide an advantage to you and your spouse. Don't just take the assurances from an insurance agent that you'll be better off with such a a plan. If you'd rather not bother with the kind of analysis described above, hire an independent, qualified financial advisor to do it for you. Don't ask the insurance agent who's pitching you such a strategy to do it -- you can guess what his answer will be.

The elections you make when you retire are among the most important decisions you'll make for the rest of your life, so take the time to do the job right. And if urging readers to decline this type of insurance scheme sounds like fearmongering to you, then consider me a proud fearmonger.

The pros and cons of leasing a car

What age is too old to keep working?
Steve Vernon