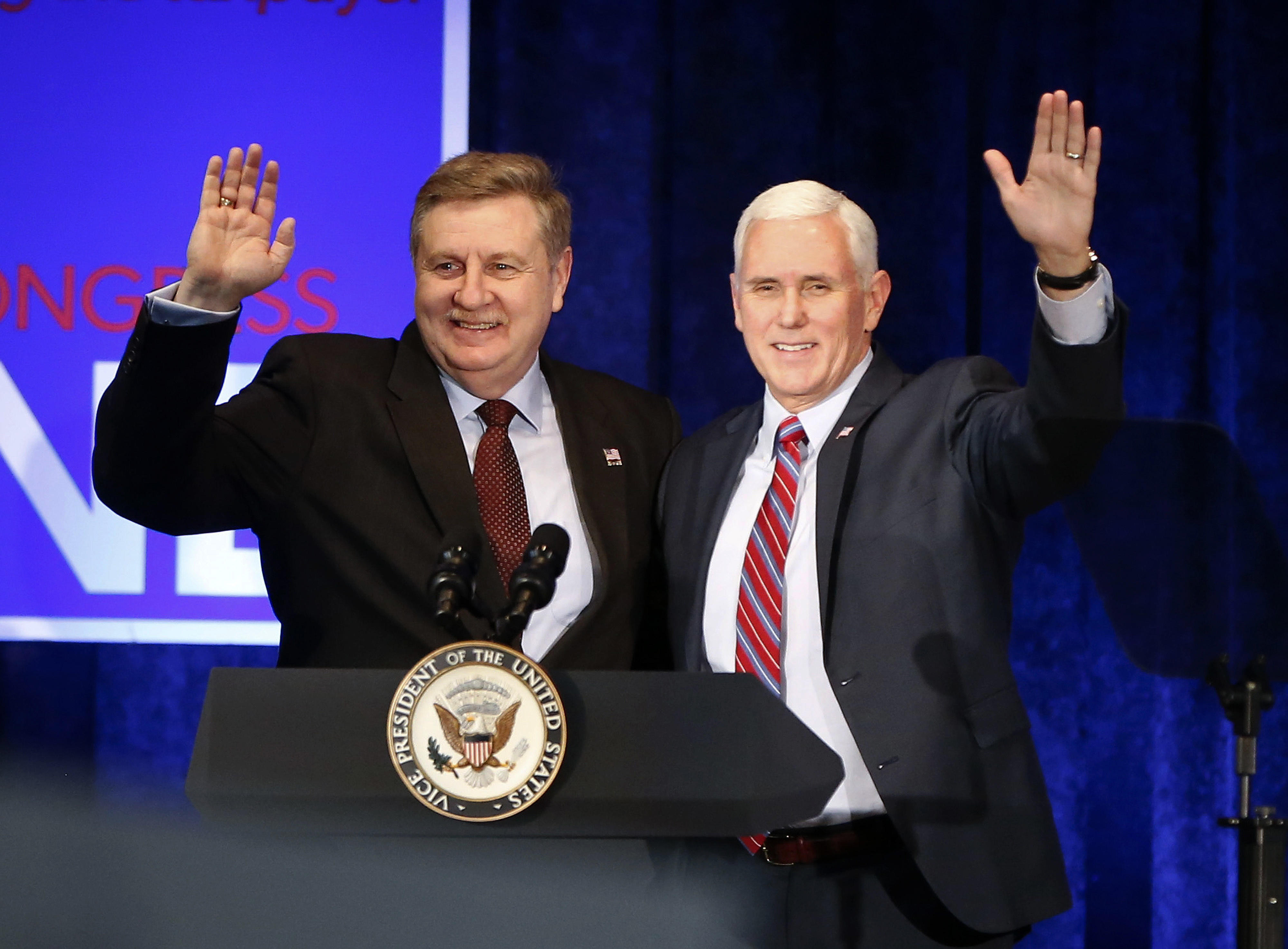 So there's a special election in Pennsylvania on Tuesday?

There sure is. The Democrat candidate is Conor Lamb. The Republican candidate is Rick Saccone, for whom President Trump joined at a campaign rally last weekend.

Who is Conor Lamb?

He's a 33-year-old Ivy League grad and Marine veteran who served as a federal prosecutor. He's also the scion of a political family; his grandfather served as majority leader of the Pennsylvania state Senate.

Who is Rick Saccone?

He's a 60-year-old Air Force vet, former counterintelligence officer, and state representative who President Trump campaigned for over the weekend. An expert in Korean affairs, he touts his experience negotiating with North Korean officials about building a power plant in the country in an effort to stave off their nuclear ambitions.

And who's going to win?

We don't know who's going to win, and that alone is saying something. The district they're competing in, which encompasses Pittsburgh's southwest suburbs, is Republican territory. In fact, it's so Republican that the district probably won't even exist in its current form come November, thanks to an anti-gerrymandering decision handed down by the Pennsylvania Supreme Court in February.

Yet Saccone has struggled to pick up momentum against the telegenic Lamb, who is running as a pretty conservative Democrat. This has caused a fair degree of frustration for national Republicans, who are worried about losing the House in the November midterms and sense that a loss here could be a grim signal of things to come.

Why is there a special election?

Former Rep. Tim Murphy, a psychologist by trade, had represented the district since he was elected in 2002. He never really had a competitive race after that, easily dispatching Democrats and primary challengers alike.

Murphy was a generic Republican with a low profile who courted local labor support. Democrats didn't even run candidates against him in 2014 and 2016. But in late 2017, he got caught encouraging an aide with whom he had an affair to have an abortion. It turned out the woman in question wasn't pregnant, but their texts were enough to get Murphy, who had always run as a stalwart opponent of abortion, to resign in disgrace.

Still, this is a Republican district. Mr. Trump won it by about 20 points in 2016. Four years earlier, GOP nominee Mitt Romney won it by 17. It is not the kind of district that should go Democratic. And yet here we are.

Republicans, realizing that they might have an embarrassing upset on their hands, have been privately trashing Saccone to the press. They say he's a bad candidate, and that if he loses, it will be his fault and his fault alone. And the chairman of the Pennsylvania GOP went so far as to tell Fox News on Monday "this is a Democrat district, not withstanding the fact that the president won this by 20 points."

There might be something to the argument that the only reason Republicans are in trouble is that primary voters picked a bad candidate. Lamb, given his resume and youthfulness, is an undeniably attractive candidate, while Saccone basically considered to be a milquetoast state lawmaker and flat-footed campaigner. The Weekly Standard pointed out that as a legislator, he's best known for introducing a measure to require that "In God we trust" be inscribed in public school buildings. Still, if Republicans can lose a seat like this, which is right smack in the middle of what's supposed to be Trump country, it's yet another sign that the GOP is in big trouble.

It's true that all politics is local, and Lamb seems like the perfect Democrat for the district. He's anti-gun control, says he personally opposes abortion, largely refrains from criticizing Mr. Trump, and says he doesn't much care for Democratic Leader Nancy Pelosi. He's also picked up much of the labor support that used to go to Murphy, in part due to Saccone's anti-union stance in the statehouse.

But regardless of Republican spin about how Saccone is a uniquely flawed candidate, they've sunk a lot of money into the race, and a Lamb victory will be taken as a bad omen for GOP fortunes nationwide. It's estimated that outside Republican groups have spent something like $9 million trying to elect Saccone. And on Monday, Donald Trump Jr. spent the afternoon campaigning for him.

The GOP's message, in broad strokes, is that Lamb is a closet liberal who will vote to make Pelosi speaker and oppose Mr. Trump's tax cuts.

For his part, Mr. Trump praised Saccone on Saturday as a "very extraordinary guy" who will support his administration's agenda. "We need him," Mr. Trump said. "We need Republicans. We need the votes. Otherwise they're going to take away your taxes, your tax cuts, they're going to take away your Second Amendment rights." Mr. Trump also came up with a nickname for the Democrat: "Lamb the sham."

Yet despite the forceful Republican effort to push Saccone across the finish line, it would appear Lamb has a real shot at winning Tuesday.

"The president comes in for his second visit, the vice president has been here, Ivanka's been here, cabinet secretaries have been here, 10 kitchen sinks has been thrown here, $15 million has been spent here, and that Marine is still standing," Rep. Mike Doyle, D-Pennsylvania, said of Lamb ahead of Mr. Trump's Saturday visit to the district, according to Politico.

What do the polls say?

It's notoriously difficult to poll a race like this. For one thing, it's a special election, which voters often skip. So it's very hard to know who's actually going to turn out the polls.

The polls that have been conducted, however, have started giving Lamb the edge. The race could still go either way, but since Democrats aren't really supposed to be competitive in a district like this, even a narrow loss for Lamb could mean that Republicans will have a tough time keeping the House.

So regardless of who wins on Tuesday, he'll have to win in a new district with a new map come November. Still, the story on Tuesday is all about whether Democrats can win in Trump country with just months to go before the midterms. They've already pulled off one special election upset in Alabama in December, and if they can build on that momentum with a victory on Tuesday, there will be a lot of worried Republicans in Washington on Wednesday.