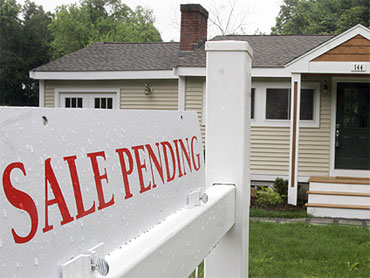 The number of people who signed contracts to buy homes rose in August for the second straight month but remained far below last year's pace. The weak economy and fears that prices will fall are keeping many consumers away from the housing market.

The National Association of Realtors said Monday that its seasonally adjusted index of sales agreements for previously occupied homes rose 4.3 percent to a reading of 82.3. That's still more than 20 percent below the pace in the same month a year earlier.

Economists surveyed by Thomson Reuters had expected the index would rise to 81.4.

The index provides an early measurement of sales activity because there is usually a one- to two-month lag between a sales contract and a completed deal.

A reading of 100 indicates the average level of sales activity in 2001, when the index started. The reading was above that threshold from March 2003 through April 2007. It sank during the recession, only to surge above 100 a year ago when the government first offered tax incentives to spur sales. When the credits expired in April, the index sank.

The sales report was driven by a nearly 7 percent jump in the South, a 6 percent increase in the West and a 2 percent rise in the Midwest. Pending sales fell nearly 3 percent in the Northeast.

High unemployment, weak job growth and tight credit have hurt the housing market, despite the lowest mortgage rates in decades. Sales picked up in the spring when the government was offering some homebuyers tax credits of up to $8,000. Once the incentives expired April 30, sales plunged.

Potential buyers are holding off on purchases because they are worried about jobs and the economy. Many have been scared away by the prospect that home prices could fall again something most analysts expect. Others are having trouble meeting tighter lending standards and can't qualify for mortgages. And some potential sellers aren't putting their homes on the market because they don't feel buyers will pay enough.

Completed sales of previously occupied homes rose in August, but at the second-slowest annual pace in more than a decade. July's pace was the slowest in 15 years.